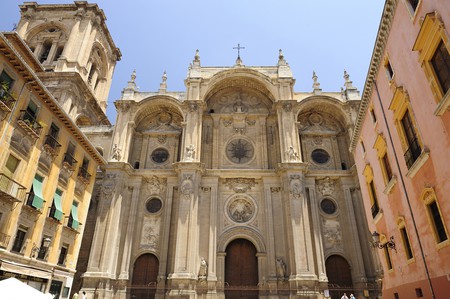 Top tip for when you arrive in the centre of Granada: if you see one of those train-like tourist buses snaking around the streets, don’t get on it. Yes, there are a lot of hills and, if you’re visiting in the spring or summer (or even September), you might be tempted – but resist. The key architectural landmarks in this enchanting city are all walkable and you’ll see much more besides if you go on foot.

The thousand-year-old Alhambra fortress sits atop a dense, verdant hillside rising steeply from the Darro river. Along with Cordoba’s Mosque-Cathedral, it is the greatest remaining piece of architecture from Andalucia’s Moorish period, which lasted from the early 8th to the late 15th centuries. In 1492, Granada was the last Andalucian town to fall to dual Catholic monarchs Ferdinand and Isabella, who promptly set about eradicating its Moorish legacy from collective memory. 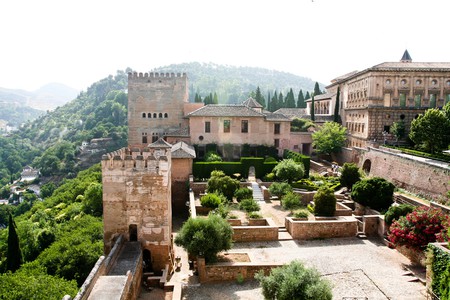 The best approach on foot to this former Arabic stronghold is up the hill from Plaza Nueva in the old town centre. This path leads through lush woodland, past mossy waterfalls and a status of Washington Irvin (whose “Tales of the Alhambra” was published in 1832) before arriving at the main archway of the fortress.

Originally dating back to the 9th century, the Alhambra’s fort and walls were rebuilt in the 1200s by the Moorish ruler of what was then the Emirate of Granada, Mohammed ben Al-Ahmar. Its forbidding, plain-brick walls (its name in Arabic means ‘The Red One’) provide a stark contrast to its interior, in which a fastidious, intricate style dominates. This style is most notable in the Nasrid Palaces, in which detailed repeating patterns are meticulously carved into plaster panels and wooden ceilings.

Walking out from the cool rooms and courtyards of the Nasrid Palaces, a signposted route weaves through exquisite gardens to the whitewashed Generalife, or summer palace. This largely open-aired, smaller complex features pathways running alongside tranquil ponds that beautifully reflect the Generalife’s elegant arches and fountains. An external walkway connecting its north and south sides provides a stunning view of the old Arabic neighbourhood of Albaicin (see below). 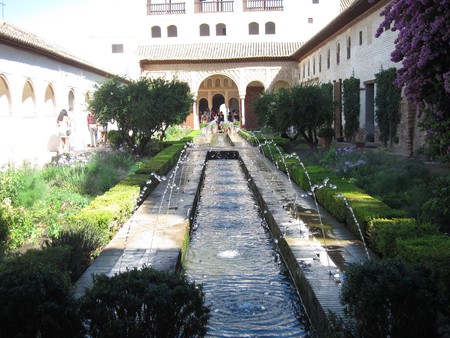 One of the benefits of Granada’s city-centre being relatively small is that its main monuments are all very close together. Coming back down the hill into Plaza Nueva after visiting the Alhambra, it takes just a couple minutes to cross the square and the busy Gran Via to reach the city’s cathedral. This imposing, Renaissance and Baroque-style construction was started in 1518 and, although it took over 180 years and successive architects to be built, it’s still remains unfinished. Two 80-metre towers were originally planned, but only half of one was ever finished. 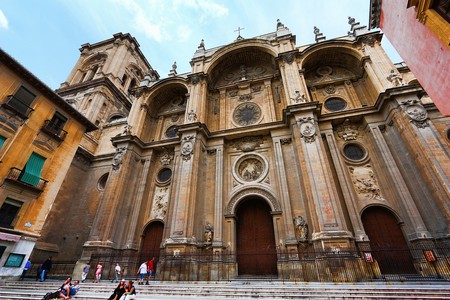 Granada’s other key architectural landmark is not a monument but an entire neighbourhood. Walking away from the cathedral, crossing Gran Via again, into the bohemian area surrounding Calle Elvira, up a street lined with a noisy succession of Moroccan cafes, shops and shisha bars. Keep on climbing for a few minutes (you’ll get fit walking around Granada) for one of the most charming neighbourhoods in all of Andalucia. 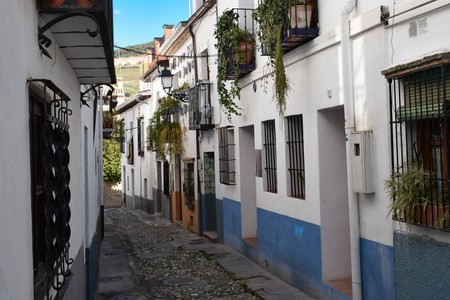 Situated directly across the Darro valley from the Alhambra, extending up a steep hill, the old Arabic quarter of Albaicin is a tangle of tightly-packed whitewashed houses with exteriors decorated by terracotta pots of blood-red geraniums. Its ancient cobbled streets wind between scruffy white walls, over which you can glimpse and smell the flowers of hidden terraces.

The Moorish arches that frame windows and the faded patterns on building facades (in Plaza Larga, for example) point to Granada’s great Moorish past, where Albaicin was once home to 28 mosques.