A Walking Tour of Ancient Sites in Cartagena, Spain 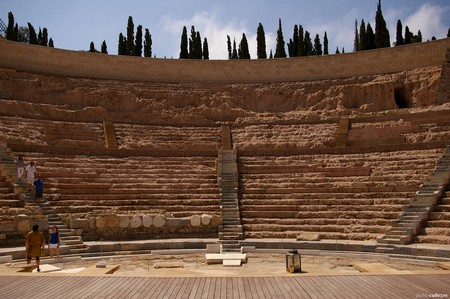 The small coastal city of Cartagena is famously packed with historic monuments, with its many layers of ancient and maritime history dating all the way back to its Carthaginian founding in 227 BC. It’s been a naval port since the 16th century, and today – as well as being a base for warships and a shipyard – the port is now a major stop for many Mediterranean cruise ships. The harbor area is defended by forts, while the town itself is walled, and dotted with Roman ruins. There’s a lot to take in – especially if you’ve only got a one-day stop on your cruise – but still, the only way to really experience it all is on foot.

A good starting point for your walking tour of Cartagena is the Punic Wall. Built to protect the city during the Punic Wars between Rome and Carthage in the third century BC, these walls are one of very few remains of Cartheginian civilization in Spain. Today, the Muralla Punica (“sacred wall”) is built around a protected section of these ancient walls. 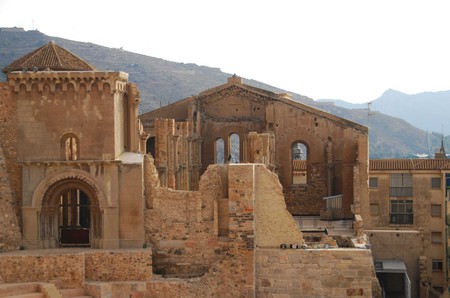 Part of the Old City of Cartagena. | © Flickr/JFelipe

Then it’s a short stroll through winding, cobbled streets to Torres Park, which is atop the highest hill in Cartagena. Here you’ll also find the Plaza de Toros (Bullring), and in its shadow, you can climb the marble steps of the impressively restored ruins of the Roman Ampitheater. Discovered by chance in 1987, the theater is now one of the city’s most impressive sights. This site remained hidden for centuries because of its location in a part of the city that had been constantly inhabited since its founding. There are two parts to this museum; the ampitheater itself and an exhibition room which describes the theater’s history and contains many of the items found during the excavation.

Archaeological sites are abundant in Cartagena; you can find the remnants of Roman, Cartheginian and Muslim civilizations almost on top of one another. The Municipal Archaeology Museum is where you’ll find all the information you could possibly need about every site in the city. The museum itself is situated on the Roman remains of the San Anton Necropolis, and includes an underground passage with the remains of Roman walls.

Head down the main road and past the tourist office to seek out La Casa de Fortuna, the remains of the former home of a prosperous Roman merchant, where artifacts hint at the luxurious lives of its former inhabitants. The house dates from the first century BC but you can still admire the fresco painted on the dining room walls and fragments of brightly-painted glass which were once the windows of the house. It’s not easy to imagine the house in its former glory, as today it’s situated below ground level, making up part of the enchanting underground city. Still, it’s a unique and fascinating place. 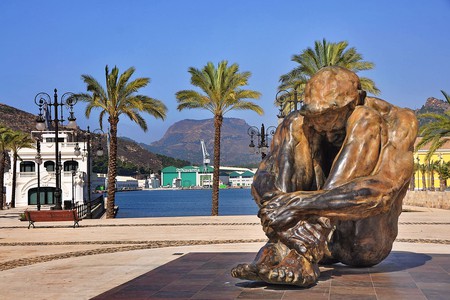 El Zulo, one of the statues at the port of Cartagena, Spain | © Flickr/Enrique Freire

After this, continue past the university towards Concepción Hill, where you can explore tunnels dug into the hillside during the Spanish Civil War and explore the Civil War Air Raid Shelter Museum.

The hill is topped by the unmissable Concepción Castle. Most of what you can see of the castle today was built in the 14th century from the remains of nearby Roman ruins. The walk uphill is strenuous, but you have the option of taking the glass-sided Panoramic Lift from Calle Gisbert, which connects the city center to the sea. The lift takes you almost 150 feet up towards the castle. From the top of the hill, the views over the town and harbor out over the Mediterranean are nothing short of spectacular.