Take this tour of Madrid's literary spots | © FEDERICO JORDÁ/Flickr
Madrid is a great city for literature buffs. Our step-by-step literary tour takes you to important landmarks related to Cervantes, Hemingway and many more.

Barrio de las Letras means neighborhood of letters, and while it’s not necessarily a literary quarter anymore, there are some important streets named after famous writers, like Calle de Cervantes and Calle Lope de Vega. Many streets have commemorative plaques dedicated to famous writers, such as Luis de Góngora, Francisco de Quevedo, and Gustavo Adolfo Bécquer, who once lived in the area.

Library
Biblioteca Nacional Madrid | © Andrey Khrobostov / Alamy Stock Photo
Spain’s National Library is located right in the center of Madrid, and has hundreds of thousands of antique books, maps, photos, newspapers and more. Simply head in and wander around, as the library is open to the public, or take a special tour. The guided tours of the library are on Tuesdays and Fridays at 5:00 pm (you must sign up here in advance) or Wednesdays and Thursdays at 10:00 or Saturdays at 12:00 pm (you must sign up here in advance).
More Info
Open In Google Maps
20-22 Paseo de Recoletos, Madrid, Comunidad de Madrid, 28001, Spain
+34915807800
Visit website

Museum
The Lope de Vega Museum, Madrid | © Turismo Madrid Consorcio Turístico / WikiCommons
This is the original house of Lope de Vega, the famous playwright. Vega bought the house in 1610 and it was later restored, declared a national monument and opened as a museum in 1935. The museum, which is a tribute to Vega and the Golden Age of Spain, has several items on display (some of which were belongings of Lope de Vega) like furniture and clothing, as well as a 17th century collection of books that was loaned by the National Library. Tours are free but you must reserve your spot by emailing or calling first.
More Info
Open In Google Maps
11 Calle de Cervantes, Madrid, Comunidad de Madrid, 28014, Spain
+34914299216
Visit website

Not only is this spot the oldest restaurant in the world, according to the Guinness Book of World Records, it’s also noted in many famous novels and poems, such as The Sun Also Rises by Ernest Hemingway. This iconic restaurant has also been mentioned in Fortunata and Jacinta by Galdós as well as in works by Frederick Forsyth, Arturo Barea, Carlos Arniches, Graham Greene and even F. Scott Fitzgerald. You’ll need a lunch break anyway during your tour, so you may as well enjoy some roast suckling pig while discussing Hemingway’s notable presence in Madrid. 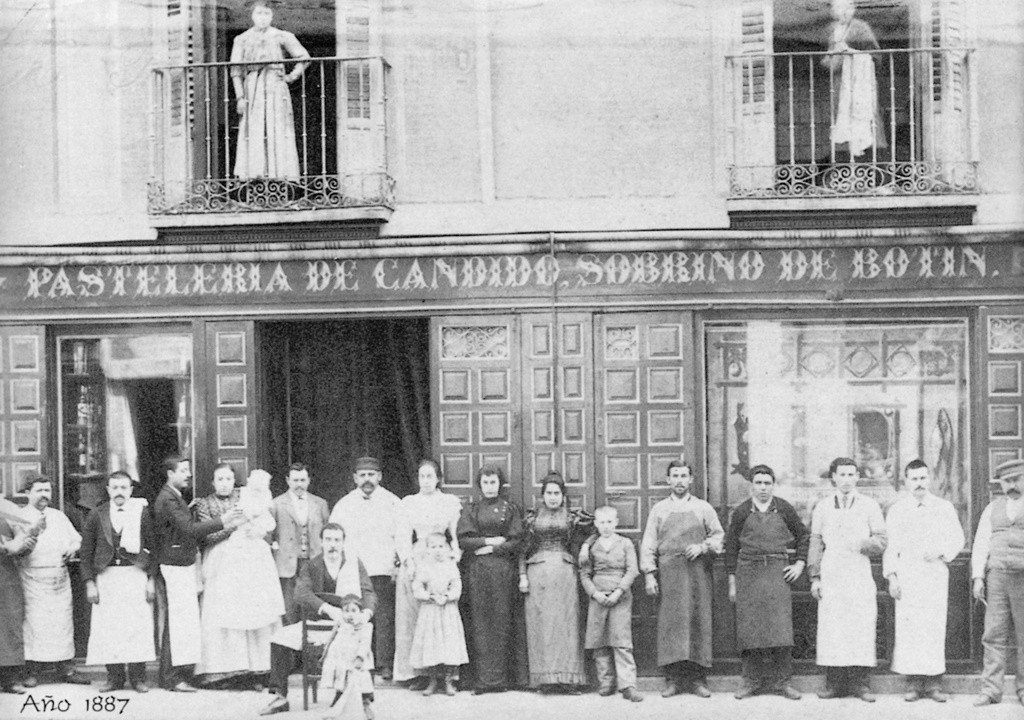 This famous cave bar is famous for three things: sangria, piano music and literature. In fact, quotes from artists, singers, actors and writers (such as Miguel de Cervantes and Garcia Lorca) are scratched on the walls and there’s even an autographed plaque from Hemingway on the wall – he was one of the bar’s first patrons.

Museum, Theater
A statue of Don Quijote and Sancho outside of the Cervantes Museum | © M.Peinad/Flickr
Miguel Cervantes, author of the famous Don Quijote, was born in a house in Alcalá de Henares, a suburb of Madrid. Cervantes was believed to have been born in 1547, and the house where he was born is now a museum, featuring a large collection of the author’s most famous manuscripts translated into several different languages. The museum also has rooms dedicated to the customs and culture of the 16th and 17th century in Spain. Throughout the year, the museum puts on several workshops and theater events for children and teens, so this could also be a great family activity. Plus, visiting Alcalá de Henares is a feasible day trip from Madrid, and the town also has a beautiful central plaza and main street to wander down.
More Info
Open In Google Maps
48 Calle Mayor, Alcalá de Henares, Comunidad de Madrid, 28801, Spain
+34918899654
Visit website

Bookstore, Building
Pass by to check out the doorway of Federico Garcia Lorca, where he resided from 1933 to 1936. There’s a commemorative plaque in Spanish, explaining that he lived there and how important theatre and laughter are to man. The building now houses a bookstore, the Case del Libro.
More Info
Open In Google Maps
25 Calle del Príncipe, Madrid, Comunidad de Madrid, 28012, Spain
Visit website