A Guide to the Teleférico, Madrid

Madrid is full of rooftop bars and restaurants, but if you’re looking to see the city from up above in a more unique way, take a ride on the Teleférico, the famous cable car.

Built in 1969, the cable car has 80 cabins and goes for almost 2.5 kilometers (1.5 miles), with a max height of 40 meters (130 feet). An ideal activity for the whole family, the cable car is an easy way to get to know the city. You can take it one-way or round trip, starting from either the Casa de Campo, Madrid’s largest park, or from Pintor Rosales, which is a street closer to the city center. 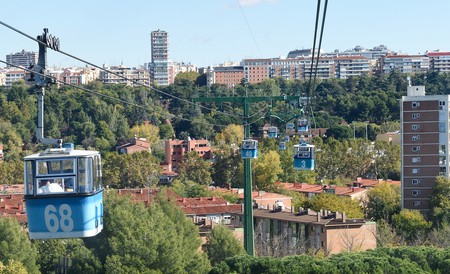 While the ride each way is only about 11 minutes long, you’ll get to see beautiful views of the Palacio Real and the Almudena Cathedral.

You’ll spot plenty of red tiled rooftops and high-rise apartment buildings where Madrid locals live. There’s plenty of green to be seen, as you fly over the Casa de Campo park, the famous Egyptian Templo de Debod and several other small parks and gardens, including the Manzanares River. 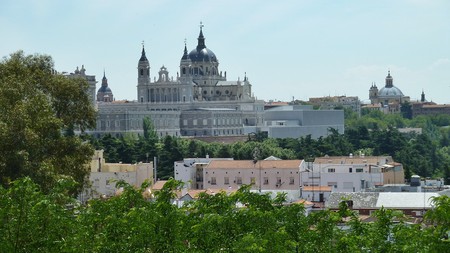 View of the palace and cathedral | © Lori Zaino

After you hop off in Casa de Campo, you can stop in the restaurant to eat lunch. In case you still feel like you need more views, there’s a terrace that overlooks the city of Madrid where you can dine.

In the distance you’ll even see more modern landmarks, including the famous Cuatro Torres, which are the four towers that form Madrid’s concept of a skyline: Torre de Cristal, la Torre Sacyr Vallehermoso, Torre Espacio and Torre Caja Madrid.

The visit is narrated, and it’s possible to hear the information in other languages, but you’ll have to notify the workers before boarding the cable car of which language you’d like. 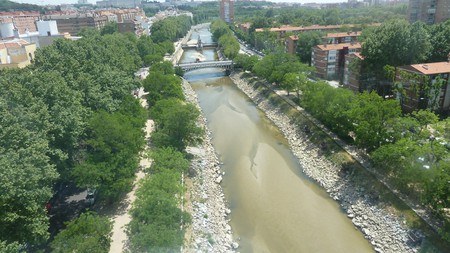 It’s possible to bring your bike along in the car as well as your pet, as long as it’s properly leashed or in a bag or kennel.

The Teleférico runs during rain or shine – even snow. But if there’s extremely high winds (more than 35 kilometers/21 miles per hour) or electric storms, it may be closed. The hours vary per day and season, so check the website to confirm. Make sure to enter the facility at least 20 minutes before closing time to ensure you get to ride. Prices are €5.90 for a roundtrip ride for adults and children, and a one-way is €4.90 – kids under three ride for free. Up to six people are allowed to ride in one car at once.