A Guide to Skiing in the Sierra Nevada 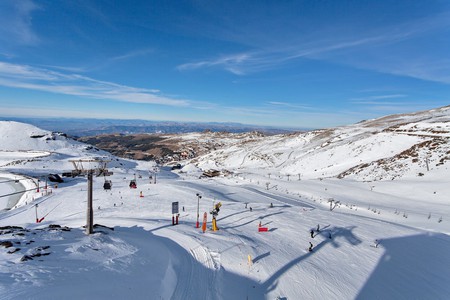 Europe’s most southerly ski resort is a great option if you want to combine winter sports with historical cities and even a trip to the beach. Follow our guide to get the most out of skiing in the beautiful Sierra Nevada.

The Sierra Nevada is a mountain range in southern Spain in the province of Granada. The Sierra Nevada Ski Resort is located on the slopes of the Pico de Veleta, Spain’s third-highest peak, located just 32km or around 30 minutes from the historic city of Granada. The resort was founded in 1964 and has 124 runs suitable for all levels of skiing and snowboarding. 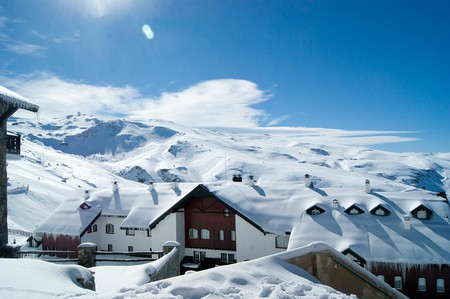 What kind of resort is it?

Compared to many of the mega ski resorts in the Alps, the Sierra Nevada ski station is relatively small, but it is a centre of world-class, high-altitude skiing – the highest altitude is 3,300 metres and you can descend 1,200 metres. The resort regularly holds international ski and snowboarding events, such as the Freestyle Ski and Snowboarding World Championships in 2017. Its high elevation means the ski season can last from late November until early May and the views on a clear day can stretch to the northern coast of Africa.

There are a good range of runs over the 106km of pistes, from 19 Green Runs, which are very easy and aimed at beginners to seven Black Runs that are classed as ‘very difficult’. There are 41 ‘easy’ Blue Runs and 50 ‘difficult’ Red Runs in between.

What other features are there?

There is also the Superparque Sulayr – a specialised snowboarding park with an 165 metre-long, six metre-high half pipe (the biggest in Spain) and medium and advanced difficulty areas covering pipes and jumps. Those who fancy a more gentle ski can try some of the resort’s cross-country runs. The resort also offers night skiing from Thursday to Sunday and a children’s snow park.

Adrenaline junkies should consider paraskiing, which involves paragliding with an instructor over the Sierra Nevada, affording you incredible views over the mountains, then landing on the slope and skiing down. A must-try for budding James Bonds.

Can I take lessons?

Yes, the resort has over 15 ski schools and a variety of lesson options, from two-hour beginner lessons to private classes to brush up on your skills.

Can I rent ski equipment?

Yes, the Sierra Nevada has two rental shops, in Pradollano and Borreguiles, where you can rent everything you need to hit the slopes, including boots, skis and helmet for €25 per day. You can book your equipment online before you set off, or rent it on the day.

Adult day passes are €46 during low season and €48 during high season. Youth (aged 13-16) passes are €42 and €43.50 respectively and children’s passes are €32 and €35. Family passes and longer-term passes (from two days to seven days) are also available. See the resort’s website for more details. You can buy most tickets online ahead of time.

A post shared by Cetursa Sierra Nevada (@sierranevadaestacion) on Apr 5, 2017 at 4:50am PDT

What are the accommodation options?

The resort town of Pradollano is located at the bottom of the slopes and is ideal for skiers and snowboarders, with a variety of accommodation options. The resort is also a popular day-trip from Granada, so it is easy enough to stay in the city and travel to the resort early in the morning and return at night. 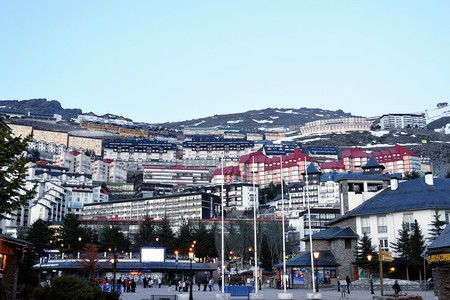 There are three daily buses during the week and four at weekends from Granada’s bus station, operated by Tocina (€5 one way, €9 return) that take around 45 minutes.

And for little ones?

If you have kids who are more into playing than skiing, then take them to Mirlo Blanco, a fun area where they can whiz down toboggan runs, have a go at sit-skiing, skate-skiing and ski-bobbing, as well as try out the magical Russian Sleigh.

If you fancy a break from the snow, you can visit the beautiful city of Granada – don’t miss its stunning Alhambra, or spend a day at the beach along Spain’s Mediterranean southern coast. 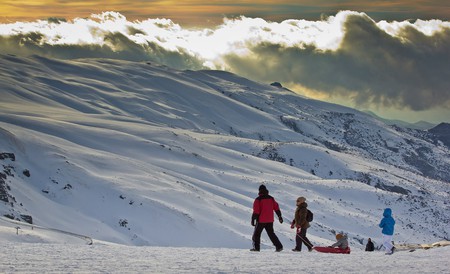