A Guide to Sailing in Ibiza and Formentera 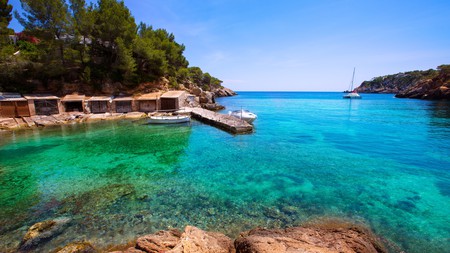 Known for its vibrant nightlife and glorious beaches, Ibiza has some incredible things for you to experience while sailing here | © Nature World / Alamy

Every summer, Ibiza becomes the clubbing capital of the world. But while the intoxicating thump of house reverberates through many trips, you can choose your own soundtrack on this pine-strewn island. Namely, the swish of the waves that lap quiet coves, the humming breaths of outdoor yoga, or the sizzle of beach-side fish grills. It’s easy to lose yourself in this gloriously peaceful place – whether you’re chasing the tune of the summer, tacking past bottlenose dolphins as the sun hits the sea or snaking along coastal paths to uncover secluded restaurants. Here’s our guide to sailing in Ibiza and Formentera. Enjoy.

What to see and do in Ibiza and Formentera

In the south of the island, cosmopolitan Ibiza Town rises from a grand natural harbour to a cathedral-topped summit. Whitewashed lanes wind past bars, boutiques and clubs in the Dalt Vila. Within its 16th-century walls, you’ll find stylish movers, last night’s shakers, garrulous old-timers and some of the island’s best food. 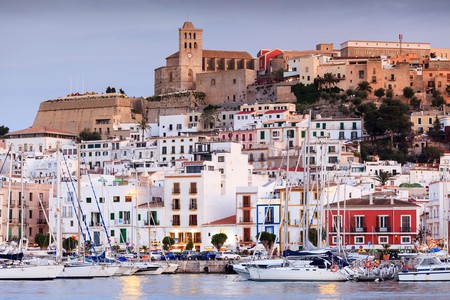 There are perfectly decent beaches near Ibiza Town, but with a yacht, you can find your own personal patch of paradise. Head west to snorkel unspoilt Cala d’Hort, east to the crystal-cut waters of tiny Cala Mastella or south to Ses Salines – where pines and dunes back the kind of white sand that dreams are made of. From Ses Salines, it’s a short crossing to the bright-green lizards, wild rosemary and nude sunbathers of tranquil Formentera – the smallest of the Balearic islands. 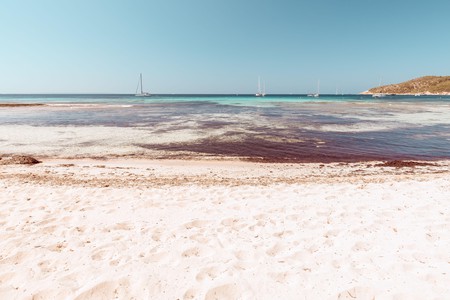 To tune in to Ibiza’s hippie vibes, check out Punta Arabí – a lively market outside the town of Santa Eulalia that’s been running since 1973. Psychedelic rugs, dreamcatchers, paella, kids’ stalls, bongos and didgeridoos: it’s all here.

If you want to be in the thick of it all, Ibiza Town’s Marina Ibiza is your blinged-up baby. It’s a champagne-toting totter from some of the island’s smartest restaurants, with space for 450 vessels – including superyachts of up to 110m (360ft). Here and at neighbouring Marina Botafoch, berths can be seriously costly, so smaller boats often moor at San Antonio or Santa Eulalia marinas.

There are sheltered anchorages right around the island, too. Cala Jondal is a rocky bay near the beachside leather sofas of the Blue Marlin Bar, Cala Benirrás has nature trails and legendary Sunday bongo sessions – while Cala Comte has some of the island’s best sunsets. 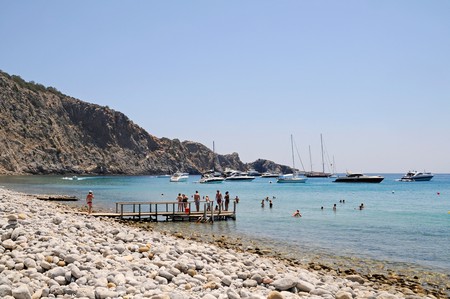 Where to eat and drink in Ibiza and Formentera

Got sand in your hair, salt on your skin and a rumble in your belly? You need a chiringuito – the Balearic answer to a beachside bar or restaurant. El Bigotes, a shack perching on the edge of the rocky shore at Cala Mastella, is one of the best. Come for grilled fish at midday, or wait for the signature bullit de peix fish stew at 2pm.

Fancy splashing out? Just south of Cala Llonga, classy cliff-set Amante offers carefully sourced meat and fish, alongside organic greens from its garden. And if the lush, beautifully plated food doesn’t have you swooning, the rugged sea views certainly will. 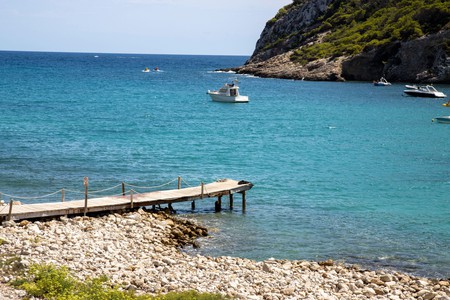 The beach at Cala Llonga in the summertime in Ibiza, Balearic Islands | © Duncan Cuthbertson / Alamy

Boats open up Ibiza’s cinematic rocky coastline, letting you head from cove to cove and out to isles like Formentera and uninhabited Es Vedrà. SamBoat has ribs, clippers, catamarans and yachts – with skippered and self-sail options – to help you reach the places others can’t, including Formentera. 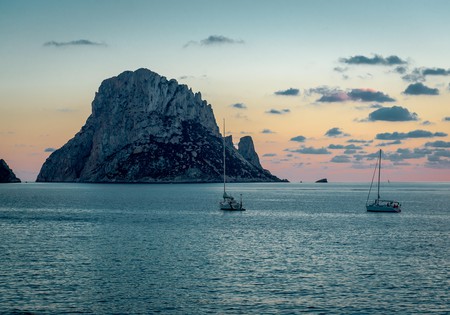 Where to get groceries in Ibiza and Formentera

There are plenty of small supermarkets near the marinas in Ibiza Town – try well-stocked Eroski on Carretera San Juan. Mercadona Ibiza City is a big hypermarket near the airport. In Ibiza Town, Mercat Nou on Carrer de Catalunya has a great range of fresh fish and other farm produce.

Ibiza is a popular stop for sailing events. Some – like the Ruta de la Sal Regatta – connect the White Isle to the rest of the Balearics and the mainland. Others, such as Ibiza JoySail and the Ibiza Gold Cup, see boats head from bay to bay as they loop around Ibiza and Formentera. 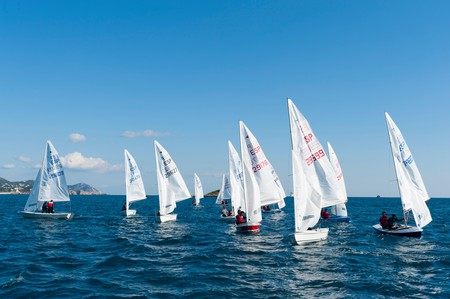 A group of sailboats participating in a regatta in Ibiza, Balearic Islands | © robertharding / Alamy

Climate and weather in Ibiza and Formentera

Ibiza is warm in summer and mild the rest of the time. With calm waters and fairly steady southeasterly winds, there’s no bad time to sail here. Nightclubs run from May to October – Pacha is the only big venue to stay open year-round – and things peak between June and August before the September closing parties. Late spring and early autumn are good bets if you want the good weather without the crowds, but even in the high season, it’s easy to get some headspace – especially if you head across to nearby Formentera. 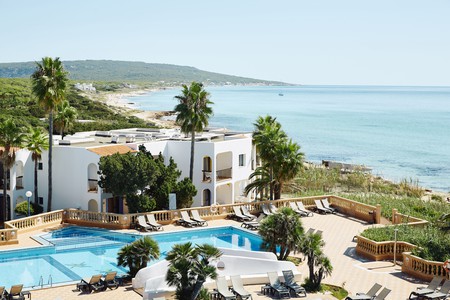 How to get to Ibiza and Formentera

Ibiza Airport, near Ibiza Town, has flights from across Europe. Several ferries run from the Spanish mainland with the route from Dénia – south of Valencia – with the quickest at around three hours.