A Guide to Navigating the Public Transport System in Barcelona 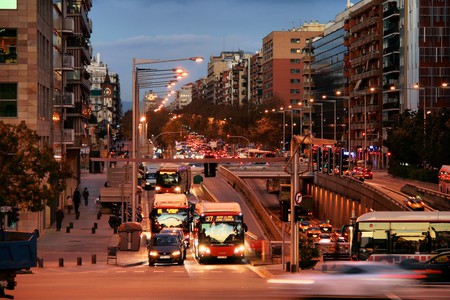 A bus in Barcelona | © Jorge Franganillo

Getting around in a big city can be a pain and require either paying for expensive taxi rides or spending hours in public transport. Fortunately, Barcelona’s public transport system is both efficient and affordable, and the fact that the city is of a manageable size means you’ll quickly and easily be able to get from point A to B.

The first thing to consider when getting around by public transport in Barcelona is that there’s more than just one mode of transport to choose from. The tram, metro and bus each present different advantages and inconveniences; deciding which one to take depends on where you’re going and what time of day you’re planning on heading there.

The second thing you should know is that a single ticket will grant you access to any of these modes of public transport. The T-10 is a ticket with ten journeys on it and, unlike tickets in other cities, can be shared among several people. Alternatively, the Hola BCN! travel card gives you unlimited access to transport for a limited amount of time, starting at just €15 ($18.52 USD) for two days. 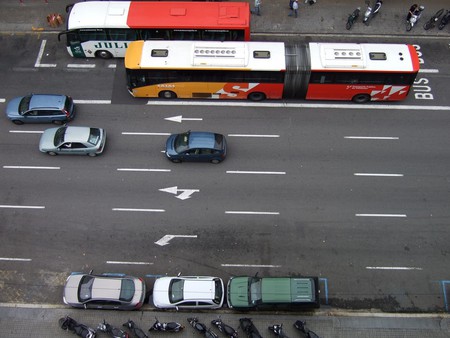 Traffic on the roads of Barcelona | © Martin Fisch / Flickr

What’s more, you can combine different modes of transport to get to your destination and only use one ‘ride’ as long as you reach your destinations within 75 minutes of when you first scanned your ticket. Say you start heading to the beach with a 15-minute metro ride, then go on a 20-minute bus ride—when you scan your ticket on the bus, you won’t be charged for another ride.

Taking the scenic route: the bus

There are two main reasons to get the bus in Barcelona. First, the bus obviously allows you to soak up the scenery during your trip and admire the architecture and buzz of Barcelona’s streets. This is especially true if you ride through L’Eixample, for example, and pass by stunning turn-of-the-century mansions and possibly some of the city’s most iconic landmarks—the Casa Batlló and the Sagrada Família.

The bus is also a good way to get to the beach and back as there are a number of bus lines that stop at different points along the beachfront. Generally speaking, anything outside of the historic city centre and the El Raval and El Poble-sec neighbourhoods can easily be accessed via bus. 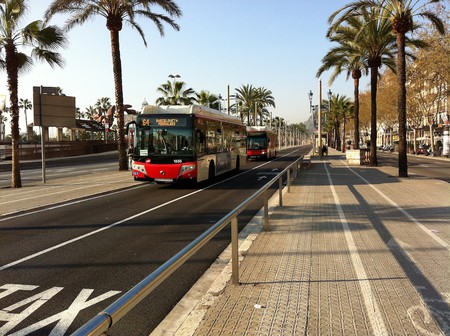 Catch a bus to the beach | © Andrew Nash / Flickr

The second reason to get around on a bus is that certain routes can be taken more quickly with a bus than with the metro, but only if you’re travelling at off-peak times. Rush hour tends to run roughly between 7 am and 9:30 am in Barcelona and again in the evening between 5 pm and 8:30 pm. During these hours, you’re more likely to spend more time on a bus than you planned, though you’ll also have more time to do some people-watching.

Getting around easily and quickly: the metro

While you may not be able to do much sightseeing on the metro, you can cover large distances relatively quickly and aren’t as likely to get lost. There are some 11 metro lines that cover most of the city centre and its peripheral neighbourhoods. You can now even get to the airport on the metro, though you’ll have to purchase a special ticket and can’t rely on your T-10.

Additionally, the metro is great for getting into the Old Town where narrow streets and heavy traffic make it difficult to use the bus. There’s a metro stop at Plaça Catalunya that allows you to get to the Passeig de Gràcia, La Rambla and the Gothic Quarter within minutes. Other nearby and useful metro stations are Liceu, located in the middle of La Rambla, and Jaume I on Via Laietana, just next to El Born. 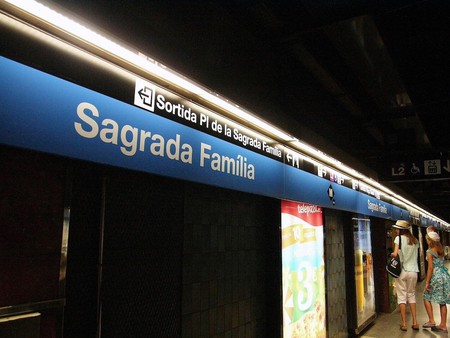 There are metro maps in all the stations with stops and directions pretty well indicated. You’ll need to scan your ticket before you get onto the train but don’t generally need to do so again if you change trains (except at some bigger stations, though you’ll still only be charged for a single journey).

Something a little different: the tram

There are only two areas in Barcelona where you’ll find tram lines: one to the south-west of the city heading out towards L’Hospitalet de Llobregat and another located towards the north of the city, starting at the Parc de la Ciutadella and going towards Poblenou, the Diagonal Mar shopping centre and Badalona.

The second line is the one you’re most likely to consider taking, as it makes for an easy, overground trip back into town from the beach or the shopping centre. The trams run regularly and offer ease and scenery—the best of both worlds. Realistically though, you’ll mostly be relying on one of the other modes of public transport. 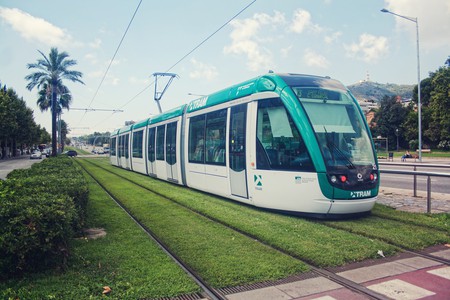 The Barcelona tram system | © Juanedc.com / Flickr
Give us feedback