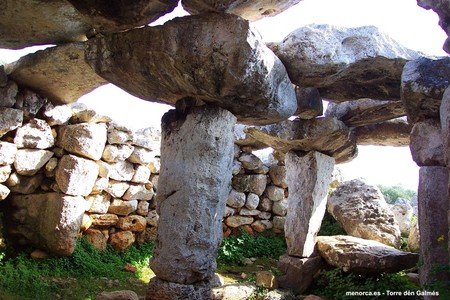 Boasting an impressive – and surprising – 1,500 megalithic sites, Menorca is a veritable a paradise for archaeologists, history buffs and anyone with an interest in ancient civilisations. The wealth of archaeological remains provides a fascinating insight into the architectural and cultural heritage of Menorca’s earliest inhabitants, and there are key sites to visit all over the island, including villages, burial tombs, and an incredible necropolis in a system of caves carved out of the rocks. Here’s our guide to these must-see megalithic masterpieces.

There are several funerary chambers (navetas) on the island, but La Naveta des Tudons is the most impressive, and certainly the most famous of Menorca’s megalithic sites. The dry-stone building was constructed of huge limestone blocks, without the use of mortar, and is an impressive piece of architecture in itself. Inside are two chambers, one above the other, and it is thought that originally the building would have been six metres high. First excavated in the 1950s, it was found to contain over 100 graves and various bits of jewellery and other objects, thought to be the funerary possessions of those buried there, and now on display at the Museu de Menorca. For a small fee, you can look around the site, although entrance to the tomb itself is forbidden for conservation reasons. 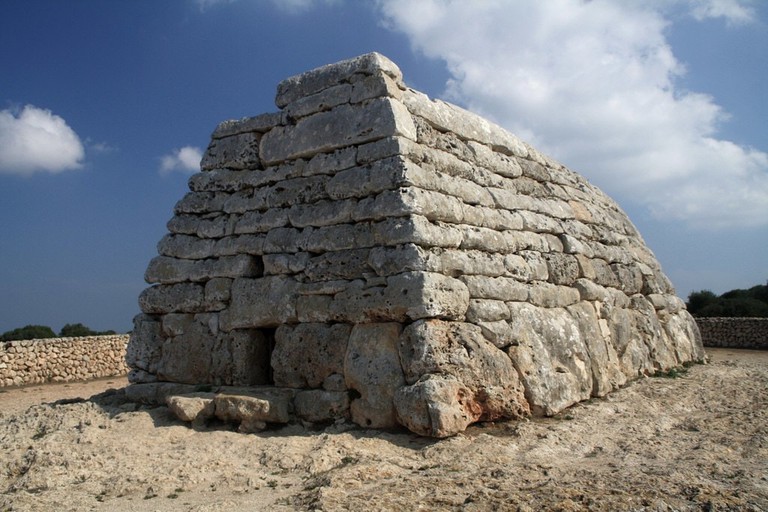 This well-preserved necropolis consists of fourteen caves carved out of the rocks to form burial chambers with internal pillars, windows, and some even with front courtyards. The caves are carved into the cliff-face in a small, rocky ravine close to the cove of Cala Morell. Used up to the 2nd century AD, the cave styles vary according to their age – the older caves are smaller and more circular and roughly hewn, and the later ones are larger and more elaborate. One large cave has what appear to be classically carved columns at the front, showing the influence of other cultures towards the end of the Talaiotic Period. Further along the cliff are numerous capades de moro, small alcove-like caves, roughly hewn in the rock, which it is thought were used to hold torches or offerings during burial rituals. These fascinating caves are open to the public and free to explore. 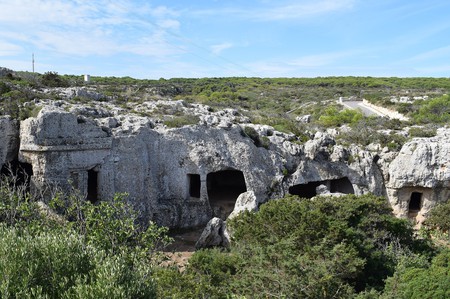 Archaeological site
Facebook
Email
Twitter
Pinterest
Copy link
Share
Map View
One of the largest Talaioitic sites on the island, this incredible megalithic village is worth taking a day out to explore. Built around 1400 BC, the village was later inhabited by the Romans, and then again during the Muslim occupation of the island. Torre d’en Galmés sits atop a hill with views over the southern coast towards Mallorca, with the Tramuntana mountain range visible on a clear day. The site has three talaiots (stone watch-towers), the semi-circular enclosure surrounding the taula (ceremonial enclosure), which is partially collapsed, the remains of numerous circular houses with central courtyards. One of the circular buildings has a hypostyle(roof supported by pillars)room with numerous columns supporting a stone flag roof, and there is evidence of a water storage system within the village.
Open In Google Maps
km 1.2 Camí de Llucalari, Illes Balears, 7730, Spain
+34971157800
Visit Website
Give us feedback

Close to the capital city of Mahón, this settlement has the remains of two small talaiots as well as a larger central tower on the hill, the foundations of circular houses with underground chambers, and some nearby caves thought to be used for burials. The most interesting part of the site is the religious enclosure containing a large taula, which is unusual due to the supporting stone leaning against it. 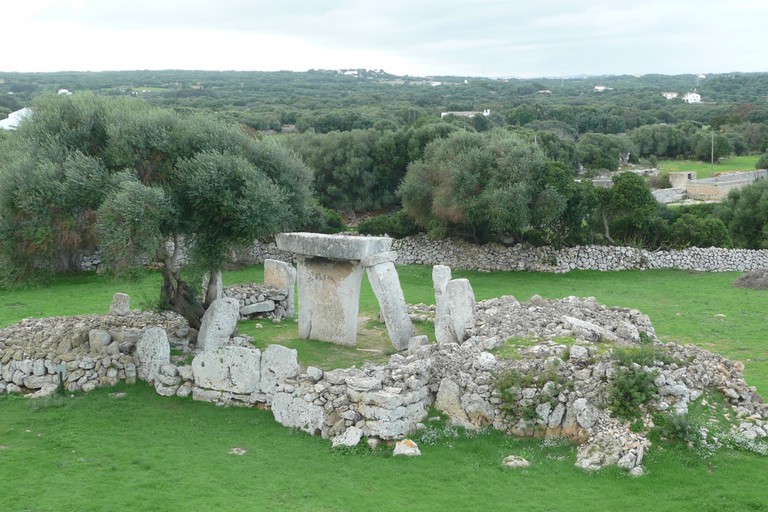 Son Catlar is considered to be a very important megalithic site, as it is the only one in the Balearic Islands to still have its surrounding wall intact. The wall is cyclopean in style, meaning that it was built as a dry-stone wall, without any mortar, and using impressively huge blocks of stone. There are a number of bastions along the wall and a passageway leading into the settlement. Sadly, the village within the walls is not so well-preserved, but there are the remains of a few talaiots and a taula. 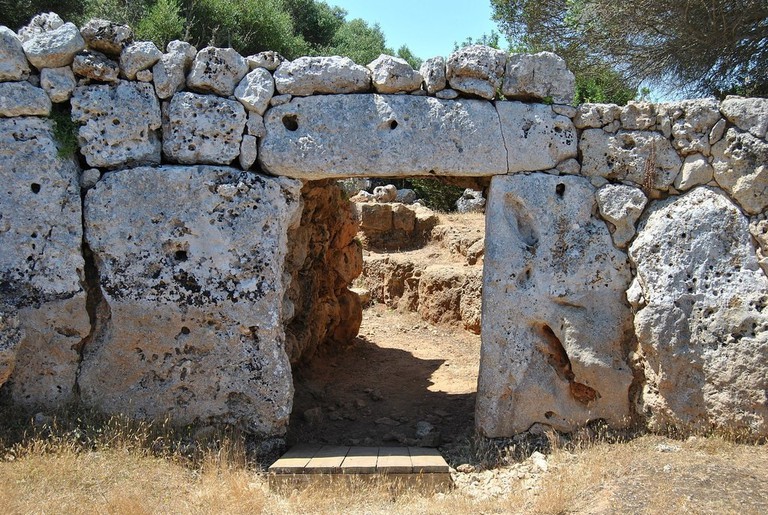 The Torretrencada settlement, near Ciutadella, has one of the most impressive taulas on the island, complete with a supporting column. Most of the enclosing wall of the taula is gone, but there are the remains of some houses and a hypostyle room, as well as a central taliaiot, and some caves thought to be burial tombs. 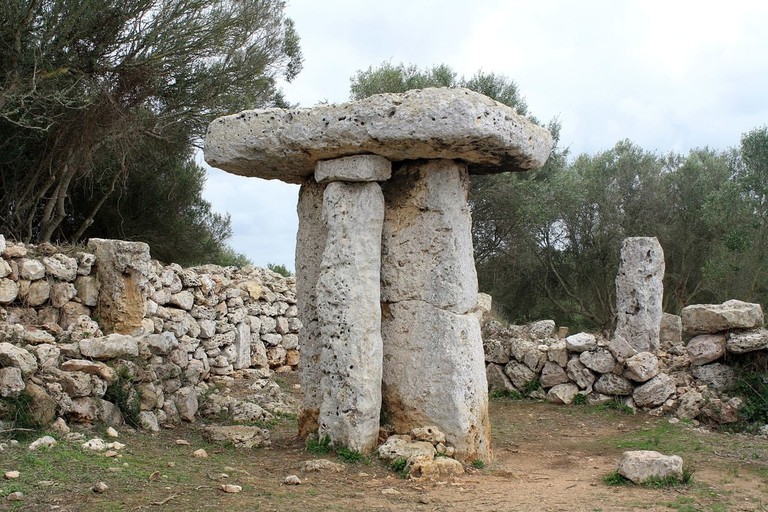 The well-preserved village at Torralba d’en Salord has the largest taula on the island, at 3m high, and 2.5m wide. The horse-shoe shaped enclosure surrounding the taula is also in very good condition, and is the clearest example of the layout of these ceremonial areas. The hypostyle room on the site is also the best-preserved example of such a hall on the island, and there are two talaiots, some caves, and a section of cyclopean wall. There is much evidence to indicate that this village was occupied in some form right up until the Middle Ages, and the Museu de Menorca houses numerous artefacts found on the site when it was first excavated. 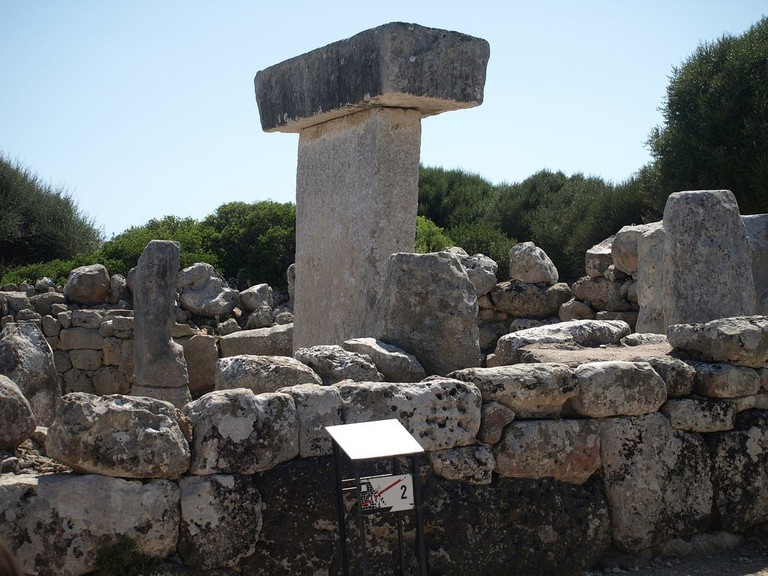