A Guide to Feria Season in Andalusia 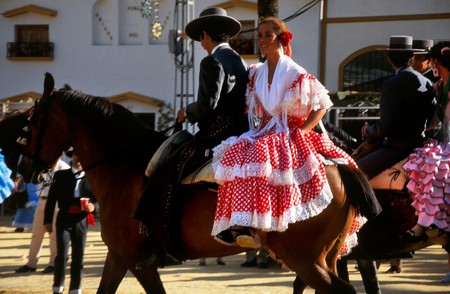 During spring and summer in Andalusia, every village, town and city holds its annual fair, or feria – week-long celebrations that revolve around bullfighting, dancing, drinking and eating. We’ve brought together the best of them, providing you with the ultimate guide to feria season in southern Spain.

Every spring, precisely two weeks after the end of Semana Santa, Seville’s Feria de Abril (April Fair) kick-starts southern Spain’s feria season in grand style. The largest of Andalusia’s annual blow-outs, it is comprised of more than 1,000 marquees (casetas) located on a sanded fairground opposite the Maria Luisa park, in which the locals party practically non-stop for a week. Although the vast majority of these casetas are private and accessible by invitation only, there are a few that are open to anyone who wants to knock back rebujito (dry sherry mixed with 7UP: Andalusian feria season’s most popular drink) and dance Sevillanas. In addition to the drinking, eating and dancing, a series of prestigious bullfights take place in Seville’s beautiful bullring.

Seville’s extravaganza is followed, at the start of May (this year it runs from the 5th to the 12th), by the wonderful Feria del Caballo (Horse Fair) in Jerez de la Frontera. As is fittting for a city famed throughout the world for its beautiful horses, this festival’s equine stars are very much in evidence throughout the day. Their smartly-clad riders parade them up and down the wide, sandy boulevards, stopping off for rebujitos-on-horseback at the casetas. A friendly ambience of inclusivity defines this feria, owed in large part to the fact that all of its party marquees are open to everyone. The colours – bright yellow sand, gleaming jet-black horses, multi-hued costumes – are spectacular, too. 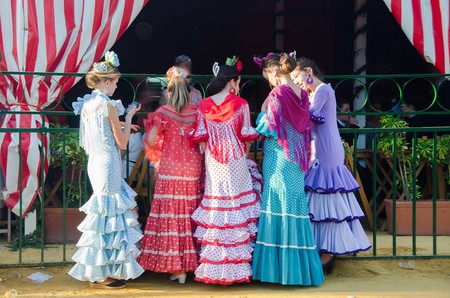 Córdoba’s Feria de los Patios, which runs throughout the month of May, is arguably the most charming festival in Spain. As its name suggests, this four-week fair celebrates the internal patios and courtyards of houses in the city’s oldest quarters, which are lovingly decorated by their owners with colourful plants and flowers. There are normally around 50 such spaces to visit – for free – during May and at the end of the month the town hall awards a prize for the prettiest patio. The patios feria usually overlaps with Córdoba‘s annual spring fair (19-26 May this year) – a rebujito-fuelled week of socialising and partying on a large sanded fairground on the city’s outskirts.

Lanjarón is a tranquil little town in the beautiful Alpujarras region of Granada. But at midnight on the eve of Midsummer’s Day (23 June), it is transformed: firemen’s hoses are turned on thousands of revellers packed into the small central square, signalling the beginning of the biggest and wildest water-fight in Spain. For the next hour, party-goers soak each other with buckets, water pistols and water bombs, whilst locals join in by pouring water down on their heads from balconies above the square. The festival that follows is a celebration of Lanjaron’s most abundant natural resource, which is supplied by natural springs in the surrounding mountains. Oh, and there’s lots of delicious cured jamon to be enjoyed, too. 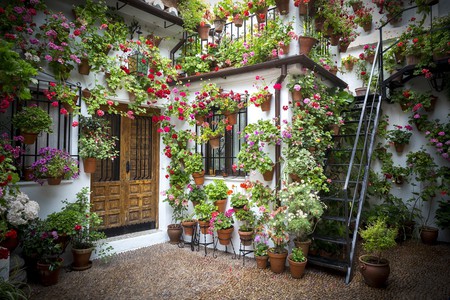 The distinctive aspect of Málaga’s annual feria, which is held in mid-August (11th-18th in 2018), is that the partying is not just confined to a caseta-packed fairground on the edge of the city. Here, the socialising, dancing and drinking spills out onto the streets of the beautiful old town too, particularly along the wide shopping boulevard of Calle Marques de Larios and Plaza de la Constitución at its top end: this part of the city essentially becomes a giant open-air house party for the festival’s duration. The best way to get involved is to buy a bottle of Cartojal – the absurdly drinkable sweet wine that is the fair’s signature tipple – and weave and dance amogst the locals by day, leaving the casetas for well after midnight. Several bullfights are also held during the week.

If you’ve been a diligent adherent to this guide and attended every festival mentioned, then you’ll probably be flagging come September. Nevertheless, we’re sure you’ll have enough in the tank to conclude feria season in style in the stunning hilltop town of Ronda. Held this year from the 4th to the 9th of September, the Feria de Pedro Romero is named after a local 18th century bullfighter who belonged to one of the spectacle’s two greatest dynasties. As in Málaga, the joyful, family-orientated partying happens on the streets, under a colourful ceiling of paper lanterns, with locals clustering around makeshift bars to drink, eat and dance. The feria‘s famous finale is the Goyesca bullfight, in which the Ronda-born Ordoñez brothers – members of the other great Spanish bullfighting dynasty – are the star performers. 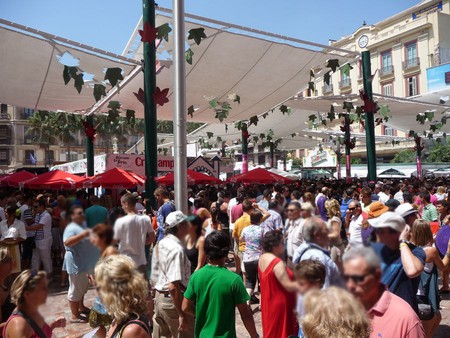