A Guide To Barcelona’s Cemeteries 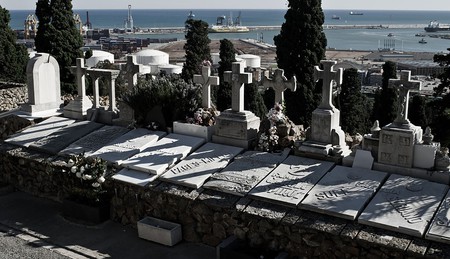 More than just a place to mourn the dead, cemeteries are a powerful testimony of a community’s history and legacy; a reminder of how people and places obtained their identity. In Barcelona, its cemeteries offer a moving experience and tell the tales of a lively past — from ancient Jewish settlements to the troubles of the civil war. Often overlooked by sightseers, a visit to these places in the city is a way to learn of its past and pay tribute to those who made Barcelona what it is today.

Located to the north of Barcelona, in the district of Sant Martí, the Poblenou cemetery is one of the first official cemeteries to be built by the city in response to the growing need for suitable places for the residents to lay their dead to rest. Dating back to the 18th century, it was constructed to offset the unsanitary locations otherwise provided by Barcelona’s then-smaller church cemeteries. The growing concern for public sanitation prompted the cemetery to be built on what would back then have been the outskirts of Barcelona.

Originally founded in 1775, the first cemetery to be inaugurated here was soon destroyed by the invading troops of Napoleon Bonaparte who stormed the city in 1813 during the Peninsular War. Facing the need to entirely rebuild the cemetery, local authorities commissioned the project to Italian architect Antonio Ginesi. The original design was a revolutionary attempt to create an egalitarian resting place that did not recognize distinctions of class and status. 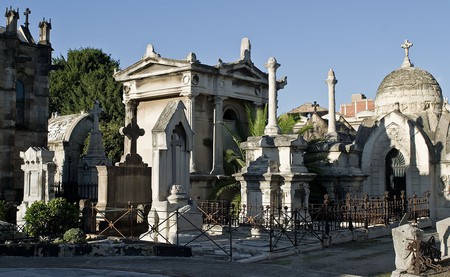 However, old funerary habits soon reappeared when the cemetery was extended in 19th century. This gave the local bourgeoisie the chance to commission ostentatious displays of wealth in the form of large crypts and mausoleums designed by popular architects of the time.

Some of the most notable characters to be buried here include the Catalan politician Valentí Almirall i Llozer, considered one of the founders of the Catalan nationalist movement; as well as influential people from the local art world such as the sculptor Josep Llimona i Bruguera, the ballerina Carmen Tórtola Valencia or the poet Frederic Soler, who wrote under the pseudonym Serafí Pitarra. However one of the most interesting tombs to visit is that of a young man known as ‘El Santet’ or ‘The Saint’ who was, at the time, believed to be implicated in a number of miracles that occurred throughout Barcelona. 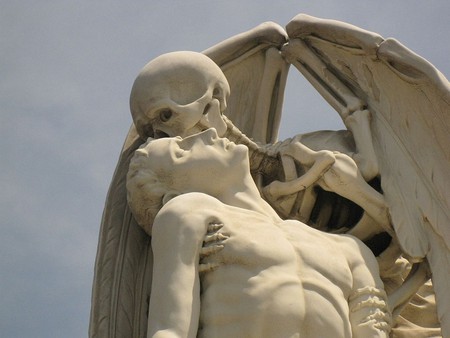 The Kiss of Death | © Enfo / WikiCommons

The cemetery is also home to a number of statues of which one of the most famous, and the most harrowing, on display is the ‘Petó de la mort’ or ‘Kiss of death’. This large marble design shows a skeletal winged monster, representative of death itself, sucking the life from a helpless young man.

Located to the south of Barcelona, Montjuïc hill has a history steeped in death: the name itself (‘Mount of the Jews’ in old Catalan) is believed to be the result of an ancient Jewish cemetery’s presence in the area. The expanse surrounding Montjuïc castle, which sits atop the hill, was also home to bloody battles during the Middle Ages; and as recently as during the Spanish Civil War, the castle itself was used a torture cell and killing ground by the Falangist troupes.

However, Montjuïc cemetery — as it stands today — was in fact only constructed in the 19th century in response to the growing need for new burial grounds. At the time, the city was undergoing a rapid phase of industrialization that caused an increase in population. In addition to the corresponding need for more places to rest the dead, this phase of urbanization also brought with it epidemics of typhus, cholera and other deadly diseases. With Poblenou cemetery rapidly filling up, the authorities opened up a new resting ground on the slopes of Montjuïc. 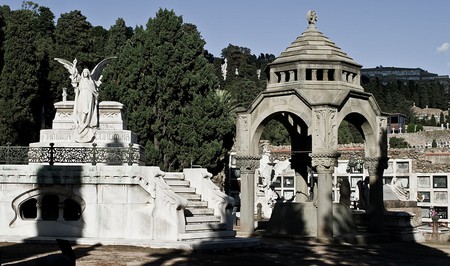 Covering over 57 hectares of land, the cemetery was initially designed as a symmetrical grid replicating the layout of the Eixample district that was built around the same time. The era was also the heyday of Catalan Modernism, and spectacular mausoleums, sculptures and crypts were erected across the cemetery by the city’s wealthiest inhabitants.

The Montjuïc cemetery is home to some of the most prominent figures to be associated with Barcelona and Catalan culture since the 19th century. These include the prominent Catalan artist Joan Miró, whose museum is located just a short distance away on Montjuïc; and the politician Lluís Companys, former president of the Catalan parliament who was executed by General Franco’s men in 1940. 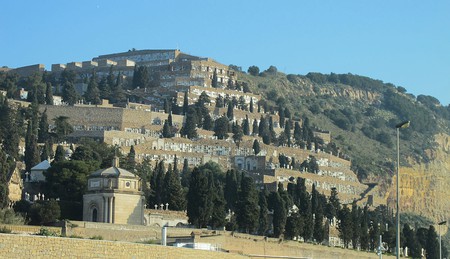 Together, the Poblenou and Montjuïc cemeteries are home to some of the most influential artists, politicians, musicians, architects and thinkers to inhabit the city. To walk past the many statues, mausoleums and crypts that have been erected in memory of loved ones is to talk a walk through Barcelona’s past and reflect on the legacy of those who came before us.