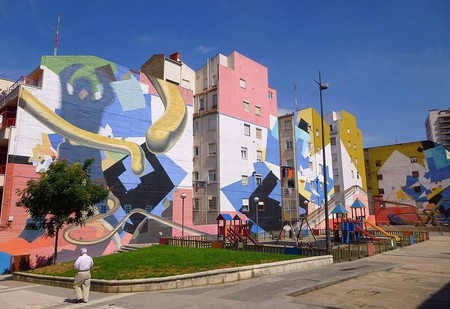 The Basque city of Bilbao is becoming well known for its creative street art scene, of which there are pockets all over the city. A city so entwined with art and design, and home to one of the world’s most famous modern art museums – the Guggenheim – it’s not surprising that urban art has definitely got a strong foothold here.

Street art and grafitti can be found all across Bilbao, but many are concentrated around a few different areas. Wander around the districts below to find some of the best pieces or visit specific murals by some of the world’s most famous street artists who have chosen to display their work in Bilbao.

Ribera de Deutso is the area located around Bilbao University, so it’s not surprising that it’s become a hotbed for street artists with it’s young and hip vibe. You’ll find a wide variety of street art here, housed in abandoned warehouses, around street corners and on bridges. 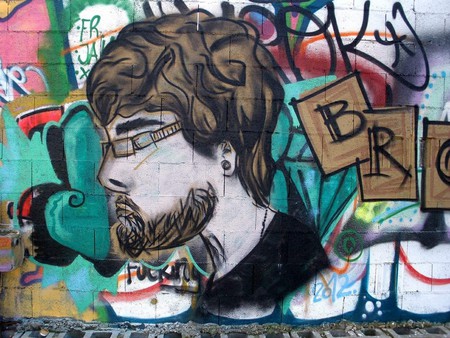 Zorrotza is situated across the river from Deusto and is quite far from the city centre, so doesn’t usually see many tourists. A more traditional area of the city, it’s undergoing a change, dotted with many murals and pieces of street art. Two places that have helped the artistic regeneration of the area are the Espacio Open at the old biscuit factory of Fábrica Artiach, which hosts workshops, events and vintage markets; and the ZAWP Bilbao, a cultural centre which holds exhibitions and the monthly MuMe Musical Market. 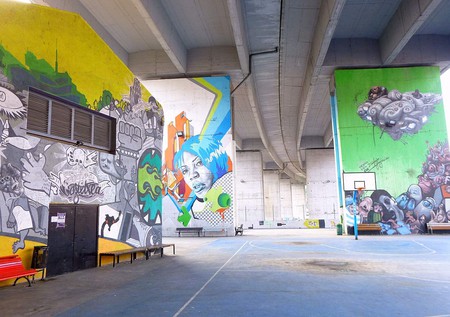 To the south of the city centre and the west of Bilbao La Vieja sits the district of Iralabarri and the Avenida Kirikiño. Here you’ll find Plaza Kirikiño, which looks almost like a painted city, with the facades of all the buildings sprayed in bright colours and geometric shapes. The murals are the work of DK Muralismo, comprising three different artists – Fermín Moreno, José Ramón Bañales and Jorge Rubio.

The famous Brazilian-Spanish street artist Erb Mon has created many pieces in Bilbao, and is known for his bold geometric shapes and bright colours. You can see some of his work located on the corner of Aretxaga and San Francisco Streets, entitled Eskerrik Asko. Another of his works can be found on García Salazar Street – a mural written in the Basque language called Bi(i)tsa, which he created in conjunction with literary writer Amânturi.

Another well-known street artist who has chosen to showcase his work on the roads of Bilbao is Sixe Parades, whose real name is Sergio Hidalgo Paredes. Originally from Barcelona, Sixe has been creating urban art since the 80s. His work is influenced by other Catalan artists such as Antoni Tàpies and Joan Miró, as well as the country of Peru, a destination which he travels to often. Sixe has produced a few famous works in Bilbao including Futurismo Primitivo (below), which can be seen on a facade in Bilbao La Vieja.

Aryz is a young street artist also from Barcelona, whose work is becoming increasingly well known throughout the world. His pieces are huge and very detailed, and usually cover the whole side of a building, often located on the sides of abandoned factories. Aryz has produced his urban art everywhere, from the United States and Puerto Rico to Morocco, China and Denmark. He also created one of Bilbao’s most recognisable pieces of street art in 2014 – El Fin Justificado, located at number 58 Urazurrutia Street.

Bilbao, Spain 2014. I've recently painted a wall in Bilbao, following a bit the style of what I've been doing lately … I spent some of the remaining energy that I still had. Quite a few neighbors didn't like it that much and as a consequence I had some issues during the process. As I've said more than once I don't paint nice imagery to have public acceptance… of course I don't paint eather to have a bad time, but sometimes you have to deal with certain things when you are on the street. Thanks to @scgallerybilbao for making it happen.