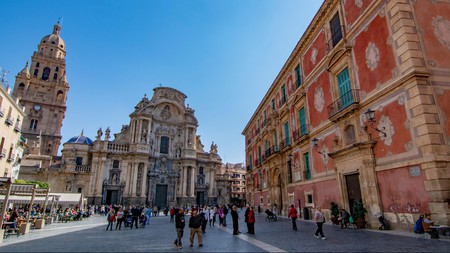 Spain is widely regarded as one of the top culinary destinations in the world. However, one area that’s often overlooked – even by many Spaniards – is the southeastern region of Murcia. The historic, autonomous community might not be as popular as Andalusia to the south or Valencia to the north, but it’s a hidden gem for foodies and the current Spanish Capital of Gastronomy. Here’s a look at the delicious highlights of Murcia, and a selection of things to see and do to help you work up an appetite on your next visit.

Blessed with more than 300 days of sun, the Costa Cálida stretches for more than 250km (155mi) in the region of Murcia. This coast is a perfect gateway to the area and ideal for anyone looking for crowd-free sun during the autumn and winter months. Other parts of Spain are already popular with tourists throughout the year, but Murcia is actually relatively unknown, even at home.

There are several award-winning golf courses here, and these attract a small number of in-the-know amateurs, but there’s also a series of active pursuits for adventure-seekers. Cycling routes and safe roads mean you can easily hop on a bike and explore the region at your leisure. The land is less barren than some parts of Andalusia, which explains why you can always take a pitstop at a vineyard if that takes your fancy, with scenic paths running through the likes of the Portman hills and Calblanque Regional Park.

The coast itself is another great place to head if you’re on a foodie trip, and some of the freshest ingredients come straight from the sea. 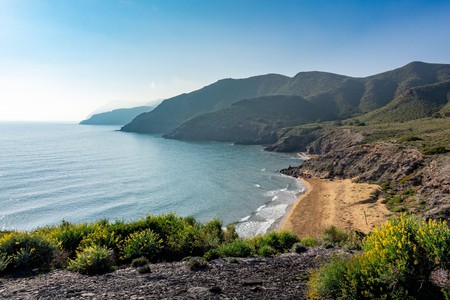 A food lover’s guide to Murcia

The main stop in the region is Murcia itself, a large town that combines modernist architecture with remnants of stunning historical buildings. The centrepiece is undoubtedly the grand cathedral in the charming old town, with the surrounding plazas offering a great selection of restaurants and cafes. Look out for Cafelab, which takes coffee very seriously. It’s the best place in town to try the regional delicacy known as the Asiático, which is believed to have originated in the neighbouring naval port of Cartagena, and is a heady mix of coffee, spices, condensed milk and a not-insignificant amount of local liquor Licor 43.

You’ll find some of the best restaurants in the region in Murcia, and it’s worth noting that many of the ingredients come from local sources. Murcia is one of the biggest producers of fruit and vegetables in Europe, with seasonal variations giving you some very special dishes at different times of the year. 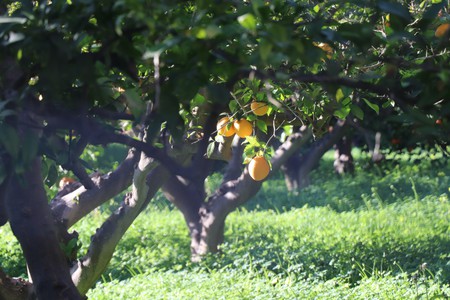 If you want to sample the best food from the region – and get a chance to savour the famous excesses of high-end Spanish cuisine – you can’t beat the two-Michelin-starred foodie playground Restaurante Cabaña Buenavista on the outskirts of the city. The menu is a delight and the presentation is pure theatre. There is a lab where the chefs try incredible creations on one another, making the most of local ingredients. On a recent visit, we tried a pumpkin ice cream with pine tree sorbet, an autumnal speciality that makes the most of the region. Expect to find plenty of rice on every menu here, too, as there are acres of rice fields away from the city centre.

Take a trip to historic Cartagena

The second-biggest municipality in the region is Cartagena, a major naval station and former Roman enclave. There are several cities around the world that share the name, but this is the original and once an important location for both the Roman Empire and Moorish rulers.

One of the largest Roman theatres in the Iberian peninsula was rediscovered here in 1988, with the ruins fully revealed and opened to the public in 2003. The city is one of the more popular tourist destinations in Murcia thanks to a coastal location and the annual festivals. As well as the traditional holy events that take place throughout the country, Cartagena is also the centre of the Carthaginians and Romans Festival, which takes place during the final 10 days of September. You’ll find street decorations, concerts and thousands of (mainly young) people dressed in full gladiator regalia. The atmosphere is fun and jovial, with everyone getting involved to some degree, and the streets are packed with partygoers throughout the night. 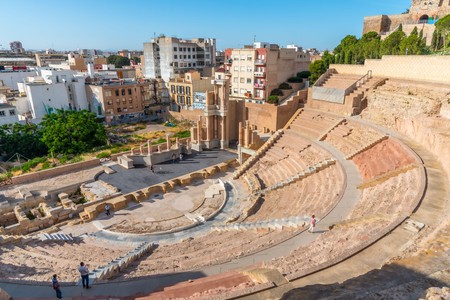 The food in Cartagena is the other thing to celebrate. As you can imagine, seafood is exceedingly popular, with one particular fish catching the eye. The tuna found here is of the highest quality, in fact it’s so good that it’s exported in large numbers to Japan, one of the biggest consumers of the fish in the world. Although wild and farmed tuna can be found in Asia, the fish caught here tend to be bigger than those found elsewhere. As such, there is a strong commercial bond between Japan and Cartagena, with 2021 even seeing the introduction of an elaborate tuna festival in the city called Cartagenasia.

Tapas is arguably more popular here than in Murcia, so expect delicious small bites – often topped with fresh seafood – to be served in most places you eat.

Dishes to try in the Region of Murcia

Caldero del Mar Menor –a rice stew traditionally made by fishermen from the catch that was too small to sell at market. Cooked in a cauldron-style pan, hence the name caldero, the stew includes ñoras (small dried peppers popular in Murcia), garlic, tomatoes, saffron and, of course, an array of seafood from the Mar Menor.

Ensalada Murciana – a traditional salad made with tomato, Cieza olives, onion, tuna and hardboiled egg. It is as healthy as it is refreshing and delicious. 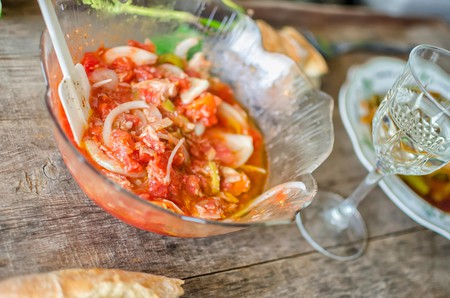 Ensalada Murciana is a refreshing, traditional salad from the region | © Juanma Diaz / Alamy

Pastel de carne – a medieval recipe with a slight North African twist to it. The strict recipe is held in high regard with standards and processes laid down in 1695. The pastry is a puff pastry, which envelopes mince meat, boiled egg and chorizo.

Paparajotes – a traditional Murcian dessert consisting of battered and fried lemon leaves. It has the indulgent texture of a doughnut but be sure not to eat the whole package. Remove the leaves and enjoy the crisp, lemony dough casing. 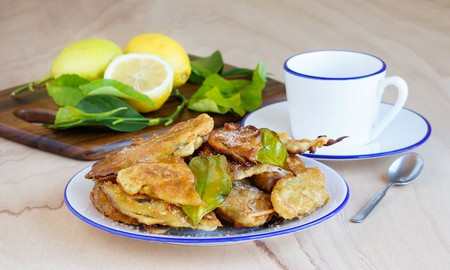 For more information and travel details, visit the official Region of Murcia website and plan you next trip to Spain.