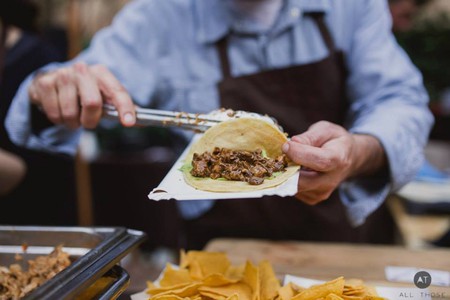 Barcelona‘s street food craze isn’t going away, with the likes of EatStreet, All Those, and Palo Alto carrying the torch and showing the way for the city’s growing obsession. Here’s our run down of some of the best-loved street food trucks in the city.

Something of a household name in the world of Barcelona street food, EL MEX is the brainchild of duo Juliana and chef Mat of Barcelona-based artisan food catering company La Cocina Palpita. Inspired by the vibrant flavors of South-American street food, EL MEX offers a choice of tacos, quesadillas, and of course nachos. However, on some occasions you may also find La Cocina Palpita offering a more European menu, and in those instances the chef’s French heritage has a way of making itself subtly felt, be it in the form of French oysters or duck confit. Whatever you’re eating, it will have an artisan feel full of those special touches that make all the difference.

Where to look for them: All Those, Lost & Found market, and other events across the city such as open days, one-off events, etc. 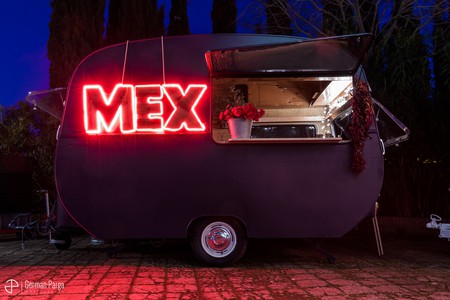 Bar, BBQ
Facebook
Email
Twitter
Pinterest
Copy link
Share
Map View
The clue is in the name with this one – combining two of the biggest gastronomic trends to hit the city in recent times – Rooftop Smokehouse provides creative street food with a distinctive smoky taste. There’s a distinctive Modern British and even Scandi feel to the food, which makes it stand out from other outfits. Their range of produce includes pastrami, duck breast, octopus, and more, all carefully smoked to perfection and usually served alongside a selection of homemade pickles and other cured treats. And if you can’t get enough of the smokehouse’s flavors, you can now take a seat at the Pastrami Bar in El Born and wash it down with a cocktail at the speakeasy in the back.
Open In Google Maps
Local B, 159 Carrer del Consell de Cent, Barcelona, Catalunya, 8015, Spain
+34639310671
Visit Website
Give us feedback

Specializing in carefully crafted artisan sandwiches and buns of all types, Caravan Made is another name to look out for on Barcelona’s street food scene. The offerings change to adapt to the seasons, but certain classics are regular features and worth a try any time of the year (yes, we’re talking about you, Ginger Pork). The brain child of duo Silvia and Javi, the latter worked in the world-famous El celler de Can Roca before deciding to set up his own project. Together they are conquering the Barcelona street food scene with the help of their emblematic ‘caravan.’

Where to find them: EatStreet, Palo Alto, All Those, Vermut Solidario, etc. 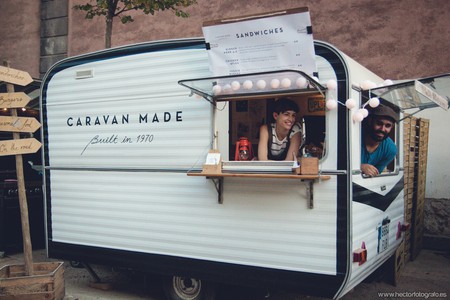 Perhaps nowadays better known for their popular venue in Gràcia, as well as the latest addition in Raval, Chivuo’s roots are firmly grounded in the street food scene, and you can still find them at a handful of street food events across the city. In fact their tagline, ‘slow street food and craft beer,‘ goes a long way towards summarizing what they’re all about. Think of the classic ‘burger and a beer’ but a cut above the rest: artisan beers, homemade burgers, and prime ingredients. They also serve a mean tuna melt, something you won’t readily find anywhere else in town.

Where to find them: at Chivuo’s Gràcia and Chivuo’s Raval, as well as All Those, EatStreet, BCN Beer Festival, etc. 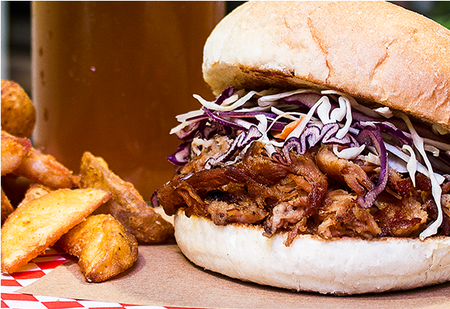 Those already familiar with this authentic Vietnamese street food delight will know that once again the clue is in the name with Bánh Mì. This iconic sandwich is served in a French-style baguette (a popular Vietnamese staple whose origins lie in the country’s colonial past) jam-packed with flavor and bursting with color. A base of either pork or tofu is supplemented with pickles, spring onion, and cilantro, leaving it up to you to choose how far you take it with the iconic spicy sriracha sauce.

Where to find them: EatStreet, Vermut Solidario, and other local events across the city.