A Day On Charming Calle d'Enric Granados Street In Barcelona

In Calle d’Enric Granados, Spain, at some point, early in the morning, you can almost feel the atmosphere of the Belle Époque. 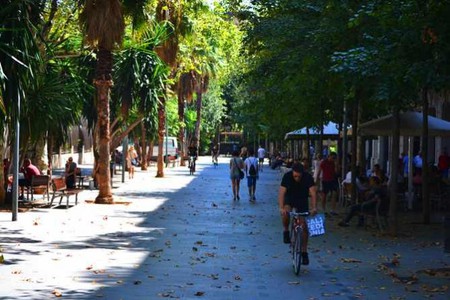 Enrique Granados (1867 – 1916) was a New Romanticist composer and pianist, founder of the School of Barcelona. This enfant prodige, famous for his capacity for great improvisation and masterful use of the pedal to achieve maximum expressiveness, was highly influenced by the bucolic landscape of the Canary Islands, where he spent a few years of his early childhood. Granados often recalled that period with affection, referring to the orange and lemon orchard he saw from his window home as the paradise of his childhood. Barcelona couldn’t find a better street to honor him than the semi-pedestrian road located just between calle Balmes and calle Aribau, in the middle of the left Eixample.

At first glance, this street may seem sleepy – but Calle d’Enric Granados is far from boring. It wakes up at around ten o’clock, and attracts visitors and entertains them in the best way: with cafés, tiny boutiques, second hand record shops, art galleries, restaurants, old shoemakers, designer shops and antique furniture. 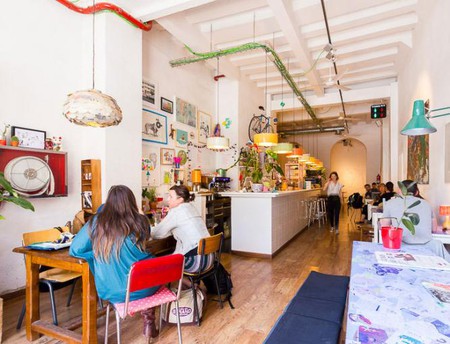 To start the day, nothing better than fresh homemade organic juice accompanied by a slice of chocolate cake at Cosmo Gallery coffee shop and art gallery. Exhibitions change every two months, showing local and international artists and designers. The menu, however, doesn’t change, which is precisely the strength of Cosmo: a few simple dishes (tasty sandwiches, hummus, nachos and guacamole, salads) always cooked with care and fresh ingredients. This is the best place to have a healthy snack while reading or working at one of the ancient wooden tables of the gallery in a colorful and cozy atmosphere.

Going up street, Tactic has kept its doors open since 1988 and has made Catalan skaters and surfers happy so far. As they say, Tactic wants to ‘treat customers like rock stars’ with professional service and the highest quality goods. If you want to learn to surf in Barcelona or enjoy skating (or just buying new cool sneakers), this is the place for you. 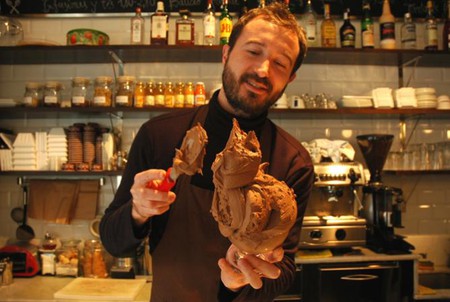 Calle d’Enric Granados also offers top-rated artisanal ice cream. According to TripAdvisor, DelaCrem is the best ice cream shop in Spain. Founded in 2010 by Italian Massimo Pignata, DelaCrem uses fresh seasonal products instead of prepared mixtures, trying to return to the way ‘la mamma’ cooks. DelaCrem centers on 20 flavors: some are evergreen, as with pistachio and chocolate, and others are rotated on a seasonal basis. The best of summer 2015 is the refreshing grapefruit and mint sorbet.

After satisfying the taste buds, it’s the eyes’ turn. At the number 21 gallery 3Punts shows exhibitions of emerging and established artists, focusing on new experimental languages. Names such as Mr. Brainwash and Shepard Fairey (A.K.A. Obey) are part of the 3Punts family as well as more classical Rafael Canogar and the Barcelona-based Samuel Salcedo. The gallery, founded in 1994, landed in Calle d’Enric Granados three years ago, joining the hub of contemporary art in the city and offering a different view of the district’s panorama.

Small shops of local products are another attraction of this charming street. Mr. David Moreno, winemaker since 1981, has inherited the expertise and wisdom of his father and grandfather, Pociano and Damián Moreno, who opened the first cellar in 1912. At the corner of Calle València, the DM Barcelona offers a selection of wines and cavas from the Rioja region in a Modernist-style building. The store has been open since 1999 on the street where David Moreno grew up and spent his youth before leaving for the countryside. 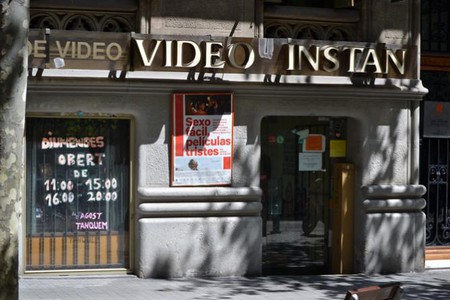 At Number 30, another historical store captures the attention of film lovers and everybody who wants to go hunting for the impossible-to-find movie. Video Instan was founded in 1980 and, thanks to a policy of constant acquisition, has now more than 40,000 titles in VHS, DVD and Blue Ray. It is not only the first but also the biggest video club in Spain so far. Despite the crisis of the movie rental industry in the era of ubiquitous internet downloading and streaming, this home-made archive resists the change. In the passionate hands of Aurora, Jenaro Depares’ daughter, the family business is kept afloat in a sea of challenges, while hoping that the public administration declares the shop a historical heritage of the city.

Almost in front of Video Instan, at Number 49, ADN Galería has been open since 2003, with the distinction of being one of the first galleries on the street. The gallery has 200 square meters of showroom where it hosts up to six exhibitions per year and sets up a dense calendar of activities such as conferences and debates. It is the only gallery in Barcelona (and in Spain) dedicated exclusively to socio-political artworks. The company works with established international artists such as Mounir Fatmi, Kendell Geers and Bouchra Khalili as well as young emerging artists, such as as Cuban Adrian Melis and Catalan Núria Güell.

There are plenty of choices among the numerous restaurants, most of them new franchises, offering pasta and pizza, crêpes or sushi, although a handful of traditional eateries remain. La Palmera is an informal 20-year-old restaurant with a tempting tasting menu that offers a sample of Catalan dishes like fideuá, local cheese, croquettes, brandade of cod and Jabugo ham. The service is quite good as well as the value.

Alba also offers a midday menu that deserves a try. Alba’s cod croquettes in tomato and honey sauce and grilled butifarra from Olot with beans and prawns can be enjoyed in a cool and elegant atmosphere with top service.

The Cabanela features a familiar and rustic ambiance with typical cuisine from Galicia, and is the best seafood grill on the street. Though the place is rather dark inside, you have the option of enjoying the terrace. The ham and croquettes are stand-out dishes and should not be missed. 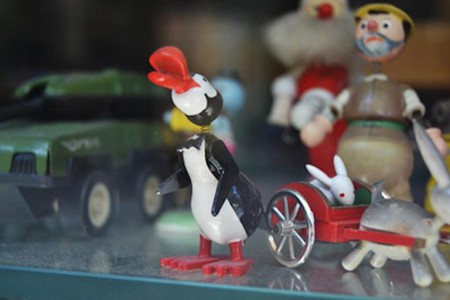 Follow lunch with an afternoon of shopping and browsing a selection of shops, boutiques and galleries. L’Appartement at Number 44 features an exclusive selection of emerging designers, original gifts, vintage décor items, wall decals, as well as reproductions of classic design furniture and lighting.

Ailanto at Number 46 is a fashion design company created by Basque twin brothers Iñaki and Aitor Muñoz, located in Barcelona since 1995 and winners of Best Spanish Designer by Glamour Magazine and the Prix Marie Claire for Best National Designer. Alianto concocts unique collections and wedding dresses.

At the corner of Calle Provença (Number 232) the book shop La Impossible specializes in Catalan books. Olga, Tono and Mireia opened it with the aim of being a Catalan bookshop of reference in the city, where readers can browse the archives and pick up something new. La Impossible is also a meeting place where the three friends host workshops, book presentations, readings and exhibitions.

At Number 70, Fins de Siècles stopped time at the golden age of Modernism. This elegant Art Deco furniture showroom landed in Barcelona in 2004, from its homeland Belgium where Michele Van Hove and Nicolas Vanderbeck founded the first gallery in 1990. Specializing in the 1930s but also treating manufactures from the 1940s and 1950s, they assure customers that ‘all their restoration, varnishing, and upholstery are done in a traditional way which allows keeping the quality and style of the period.’

Fast forward to the 1990s at Music World, which is a fun homage to retro vinyl records (LP and 45 revolutions) and second hand CDs and DVDs. According to the hand written paper hanging on the window, this is the ‘Paradise of vinyls, movies and CDs! (starting from 50 cents)’.

El Coleccionista also offers memories of the past with its huge collection of toys, bottles, glasses, tin-plated boxes, old consoles and video games from the 1980s, prints, posters, books, comics and everything you can think about. 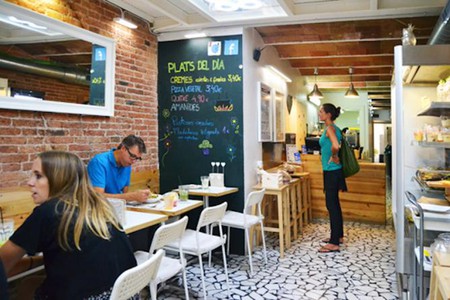 Before saying goodbye to this vibrant day spent traveling back in time, a must-have drink to recover before heading home is one of the energizer juices of Green Shots. Cold pressed juices are always prepared with love, mixing vegetables and fresh fruits with knowledge and scientific precision. This tiny health-bar creates juices for all purposes: detox, stimulation of blood circulation, refreshment, de-congestion, and pure enjoyment.