A Couple’s Guide to the Most Romantic Spots in Granada 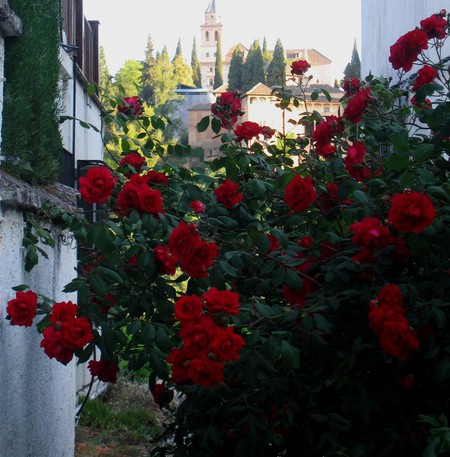 Just walking around Granada is a romantic experience in itself. Winding, cobbled streets lined with whitewashed old houses and orange trees; hidden little squares overlooking the Alhambra fort and an abundance of street music and entertainment make it one of Andalucia’s most dreamy destinations. Beautiful gardens and excellent restaurants with secluded terraces are also on offer for holidaying couples.

These gardens, situated right next to the Alhambra at the top of the city, are one of the most romantic public spaces in Granada. Because the vast majority of visitors up here head straight for the Alhambra, this lovely haven of greenery, small ponds and leafy paths is only ever sparsely populated with strollers. As a result, it feels private, almost exclusive. In the summer, its shaded walkways provide a sanctuary from the searing heat and its views of the landscape beyond Granada give a sense of space that is sometimes lacking in the cramped city centre. A little turret straight out of a fairytale sits in the middle of this verdant oasis; climb up its small spiral staircase and survey the gardens and Granada from the most romantic viewpoint in the city. 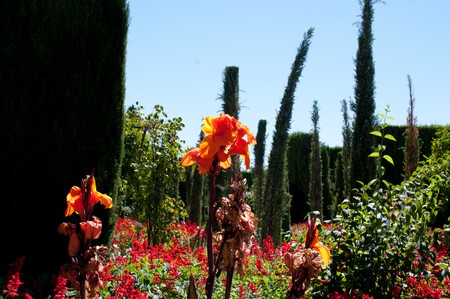 Granada is home to many romantic gardens | © SnippyHollow/flickr

Restaurant, Mediterranean, European, Spanish, $$$
Facebook
Email
Twitter
Pinterest
Copy link
Share
Map View
Special dinners in Granada are all about terraces, stunning views and delicious food. And El Trillo, lurking behind a tiny sign in one of Albaicin’s scruffy backstreets, has one of the best patios in the neighbourhood (which is saying something): secluded, overhung by tumbling jasmine and ruby-red geraniums and lit at night by mellow lanterns and candles; what it lacks in views it makes up for in ambience. El Trillo’s food is strikingly different from that on offer in the other more inflexible traditional restaurants in Albaicin. The cooking is bold and inventive, providing international twists on Spanish classics.
Open In Google Maps
3 Callejón del Aljibe de Trillo, Granada, Andalucía, 18010, Spain
+34958225182
Visit Website
Give us feedback

If there were a competition for the most romantic terrace in Albaicin – which there should be – then it would be a tough call between El Trillo and the ‘Stars of San Nicolas’. Located on the corner of Albaicin’s most popular and photographed square –Plaza San Nicolas, for incomparable views of the Alhambra and Sierra Nevada – this restaurant has several levels and dining rooms, the best of which is the small balcony on the top level. The perspective of the Alhambra at night from this terrace, which can only accommodate five or six immaculately-laid tables, makes for an unforgettable dinner. The experience is only enhanced by the intimacy of the space and, sometimes, by the resident flamenco guitarist, who plays unobtrusively as you eat. Estrellas is more pricey than other restaurants in the area because of its location but you won’t begrudge the extra outlay. 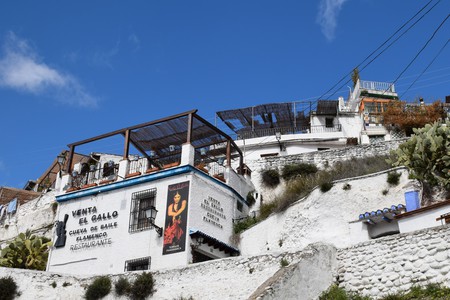 The Sacromonte gypsy quarter of Granada is a must for any couple visiting the city; Andersen Pecorene, flickr

The entire neighbourhood of Sacromonte is unmissable for any couple visiting Granada, comprising dappled white and blue caves that are still gypsy dwellings, the city’s best ‘zambra’ flamenco spots and truly humbling views of the Alhambra. But more romantic even than the streets of this other-worldly place are the tiered gardens of the Museo Cuevas del Sacromonte, located towards the end of the Camino de Sacromonte. Stone steps lead up through the various levels underneath trellised archways that are bordered by delicate little rockeries. Each level has its own terrace offering perspectives of the Alhambra and of Granada flowing out, as though spilt from the Darro valley. At the top is an open-air auditorium where concerts are staged during the spring and summer. If there’s a better spot for live music in southern Spain, let us know.