A Brief Introduction to the City of Arts and Sciences 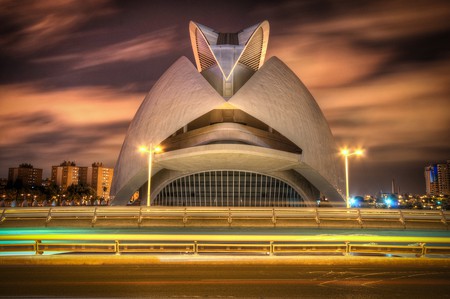 You can’t visit Valencia without seeing the City of Arts and Sciences. This ultra-modern scientific and cultural complex – known in Spanish as la Ciudad de las Artes y las Ciencias – is the largest in Europe, and its striking buildings are fast becoming symbols of the city.

Set in an expansive area of just under two kilometres in the former bed of the River Turia, the group of six futuristic structures – most of them designed by Valencian architect Santiago Calatrava – has a seemingly endless capacity for entertaining and stimulating the mind. There’s a lot to see and do inside, so you’ll need to plan your visit carefully if time is short. 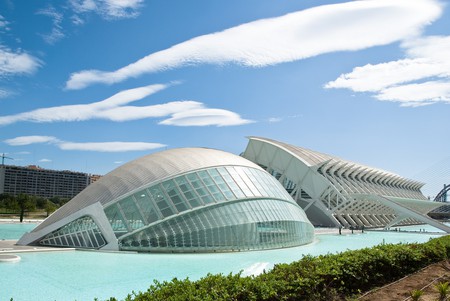 The vast Oceanografic building gleams white against the greenery of the riverbed, its curves reflected in the mirror-like surfaces of surrounding water features. Inside you’ll find Europe’s largest aquarium. Almost 500 different species of marine life can be seen, including dolphins, belugas, sea lions, penguins and sharks, set in seven different marine environments – the Mediterranean, the polar oceans, the Arctic, the islands, the tropical seas, the temperate seas and the Red Sea. You’ll need at least a few hours to do it justice. 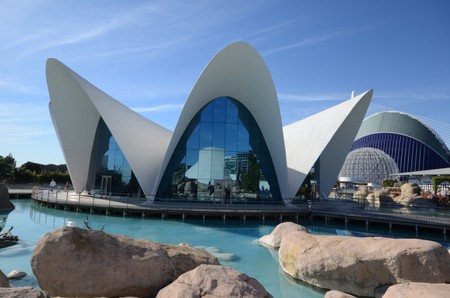 The long, rectangular building is the Prince Felipe Museum of Sciences, with interactive, hands-on permanent exhibits that promise to be both fun and educational for all ages. There are also spaces which host changing scientific and cultural exhibitions throughout the year, such as the very popular Exposicion del Ninots in February and March, showing the 700 intricately-painted wooden figures, or ninots, which are to be burnt at the upcoming Fallas festival.

L’Hemisfèric, known as the ‘eye of the city’, is an audio-visual space featuring an IMAX cinema and planetarium. In the evening, take in yet more culture with theater, dance or opera performances at the grand Palau de les Arts, the city’s first purpose-built opera venue.

The complex is completed by its most recent addition; the blue building known as the Agora, which formerly hosted the Tennis Open but is now expected to be used as a multipurpose event space, and the Umbracle, an open-air space which is the perfect vantage point for taking photos.

Prices for entry range from just a few euros for some of the temporary art exhibits to upwards of €20 per person for the aquarium. Of course, strolling in the gardens and admiring the architecture is a free and very enjoyable way to experience the complex, too. 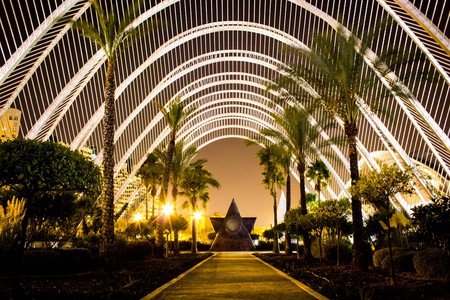 Whether you have a few hours or a few days, the City of Arts and Sciences will keep you entertained. Don’t just take our word for it, explore it for yourself.

📅 Monday–Sunday, 8AM–12.30AM. Opening and closing times may vary depending on events held at the center.