A Brief History of the Templo de Debod

One of Madrid‘s most treasured monuments, the Egyptian Templo de Debod, wasn’t always there. How did an Egyptian temple end up sitting in a park in a European capital city anyway? This is how the story goes… 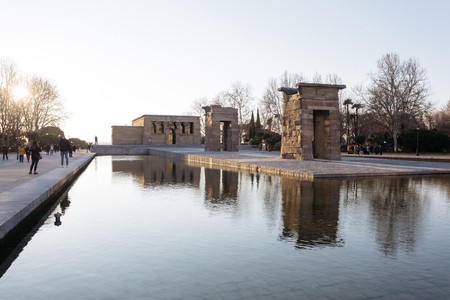 The Templo de Debod dates back to the early 2nd century BC. It was actually built several miles south of Aswan in Egypt as a small, one-room shrine in order to worship the Egyptian god Amun. Later, the temple was enlarged by various pharaohs and kings, and eventually it was completed by the Roman emperors Augustus and Tiberius.

Fast forward a few thousand years to 1960, and UNESCO intervened financially and scientifically to help save some ancient temples and ruins in Abu Simbel, which were in danger thanks to the construction of the Aswan Dam. Instead of a handshake or verbal thanks, Egypt felt it needed to offer more, and it donated this temple to Spain in 1968. The country, full of gratitude, also donated a temple to the US, which sits in the Metropolitan Museum of Art in New York, as well as one to Italy, which you can find at the Museo Egizio in Turin, and one to the Netherlands, which is located in the Rijksmuseum in Leiden. 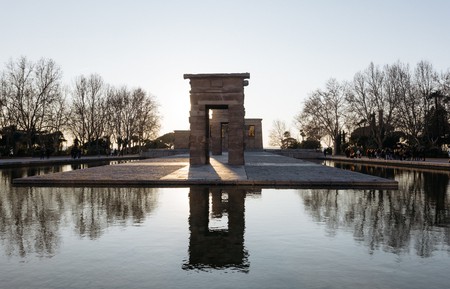 Of course, there were some serious logistics involved in shipping an ancient temple over an ocean. Debod was first deconstructed in Egypt and shipped to Spain in pieces. Then Madrid carefully rebuilt the temple at its current location, stone by stone, on the edge of the Parque de Oeste near the Plaza de España. The process was long and tedious, because the reconstruction needed to be done correctly to ensure no parts of the temple were damaged. It was inaugurated by Carlos Arias Navarro, the mayor of Madrid, in July 1972, and then opened to the public.

Today, there’s no entrance fee, but you may have to wait in line to go in, because no more than 15 people are allowed inside at once. You can, however, enjoy walking around the outside of the temple at any time, and Debod’s hilltop location is perfect for watching the sunset. Walking around the park, you can also enjoy plenty of grassy area and views of Madrid, especially the Almudena Cathedral and the Royal Palace. 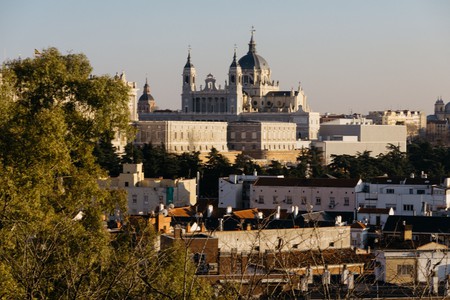 Saturday to Sunday and holidays: 9:30am–8pm

Saturday to Sunday and holidays: 9:30am–8pm

The last visit will be 15 minutes before the temple closes and each visit is capped at 30 minutes.