A Brief History of the Santiago De Compostela Cathedral 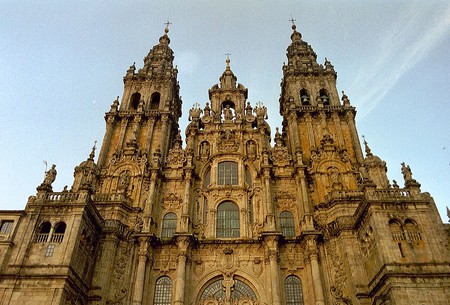 The Santiago de Compostela Cathedral is one of the most important religious structures in the whole of Spain, particularly because it marks the end of the 790 kilometres (490 miles) that make up the Camino de Santiago pilgrimage route. Located in the region of Galicia, in the northwest of Spain, it is a key attraction much-visited by tourists and locals alike. Read on for more about the history of this beautiful building.

Construction of the Santiago de Compostela Cathedral began in 1075, during the reign of Alfonso VI. It was built under the direction of Bishop Diego Peláez, on the site of an old church dedicated to Saint Santiago, or St James as he is known in English.

Work on the cathedral stopped after the initial stages and didn’t continue until 1100, when architect Master Esteban created three naves in the shape of a Latin cross. Construction carried on throughout the 12th century, and many extensions were added over the years in various architectural styles, including Romanesque, Gothic, Baroque, Plateresque and Neoclassical. 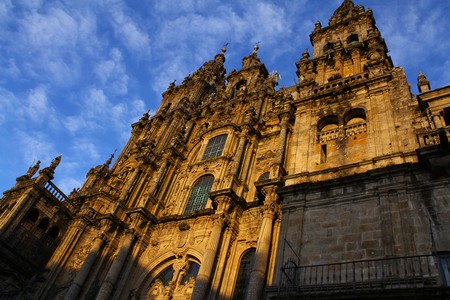 In 1188 Master Mateo took over the construction of the cathedral and added one of its most spectacular features – the Gloria Portico, which is its main entrance. It is decorated with 200 figures representing the Apocalypse, and the figure of Saint James, welcoming the pilgrims at the end of their journey. The Basilica was finally consecrated in 1211 before Alfonso IX.

The Santiago de Compostela Cathedral of course marks the end of the Camino de Santiago, the pilgrimage route which covers some 790 km (490 miles) all the way from Saint-Jean-Pied-de-Port in France across the top of Spain. Because of this, the cathedral has become a place of great significance for many, whatever their reason for walking the route, and is a very poignant spot. 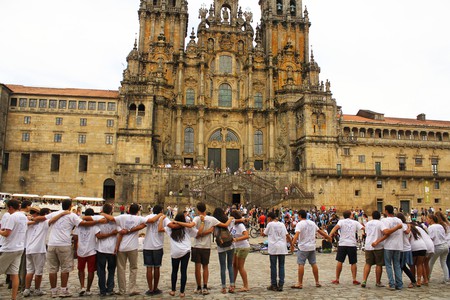 One of the most interesting elements about the cathedral is the famous Botafumeiro, a large censer which disperses incense amid the congregation. Weighing 53 kg (117 lbs) and measuring 1.5 m (4.9 feet), it is one of the largest in the world and is suspended 20 m (65 feet) high above the crowd via a system of ropes and pulleys. On special occasions, and after some masses, the Botafuemeiro is released by team of eight tiraboleiros who swing it across the cathedral at great speeds of up to 68 km/hr (42 miles/hr). It is thought that this tradition was started in order to cover up the smell of the thousands of pilgrims arriving at the cathedral after their exertions.