A Brief History of the Puerta de Alcalá Monument 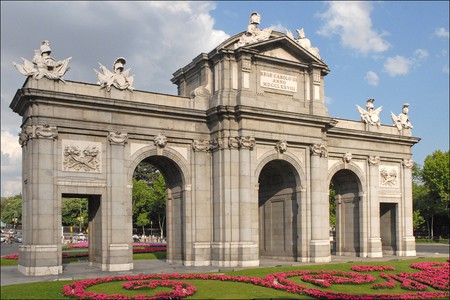 The Puerta de Alcalá (Door of Alcalá) is a monument that, as its name suggests, was once one of the five doors used to enter the walled city of Madrid when travelers visited from France, Aragón, and Catalonia. Situated next to the famous Parque del Buen Retiro, the Puerta de Alcalá is an emblematic monument in Madrid today, though the city is no longer walled and stretches far beyond the gate’s location.

What stands today wasn’t the first Door of Alcalá that was built in Madrid. A smaller and less glorious version of the door was located closer to the city center in the 1500s. When King Carlos III came into power, he decided that the original door wasn’t going to suffice and insisted a new door be constructed. After viewing proposals from famous architects Ventura Rodríguez and José de Hermosilla, he finally chose the Italian architect Francisco Sabatini’s design. In 1764, the original Puerta de Alcalá was demolished and construction began on the new door. The Puerta de Alcalá was completed in 1769 and officially inaugurated in 1778. 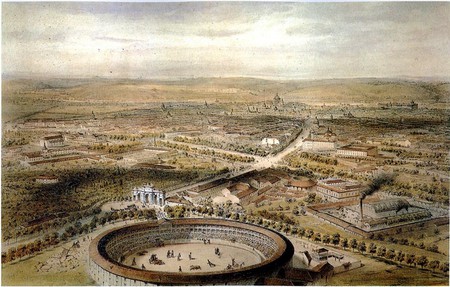 The gate, which measures 19.5 meters tall, has five arches in total with ornamental statues at the top created by sculpture artists Francisco Gutiérrez and Roberto Michel. The statues have been said to represent virtues such as prudence, justice, restraint, and courage.

The door, which is known for its neoclassical design style, is similar to many of the Roman triumphal arches you see around the world. The monument has been restored five times since its original construction. In fact, it’s known for being one of the first triumphal arches constructed in Europe after the Roman empire fell, constructed before the Arc de Triomphe in Paris and the Brandenburg Gate in Berlin. The name of the monument comes from name of the route leading from Madrid to the nearby village of Alcalá de Henares, which today is a bustling suburb housing the famous University of Alcalá. 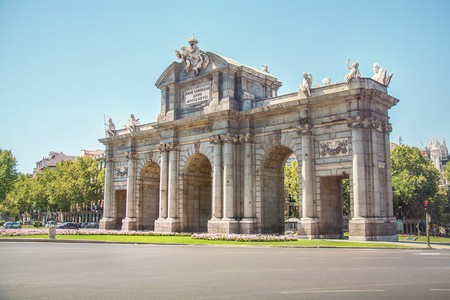 The Gate of Alcalá | © Juanedc.com/Flickr

Many interesting facts surround this famous monument. It was actually once used as a special route for the seasonal migration of livestock, meaning that sheep crossing through the door was a regular occurrence. To honor this tradition, one fall Sunday per year, Madrid celebrates the Trashumancia Festival, where 2,000 sheep are paraded through the center of Madrid and through this monument. It’s quite a sight to see!

During the Spanish Civil War, the door was repeatedly hit by bullets and bomb shrapnel, and the damage can still be seen on the door today. Famous singers and bands such as Katy Perry, Thirty Seconds to Mars, and Linkin Park have all performed live from the Puerta de Alcalá in recent years. 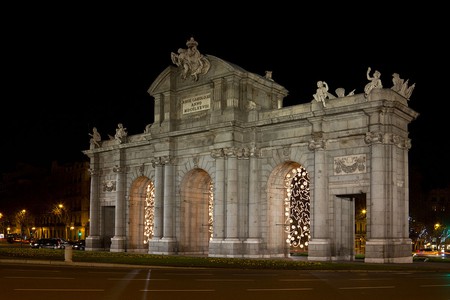 Visiting the monument in spring, when the flower gardens in front are in bloom is as especially beautiful. Another great time to visit is around the holidays, when the monument is lit up when Christmas lights and decorations.