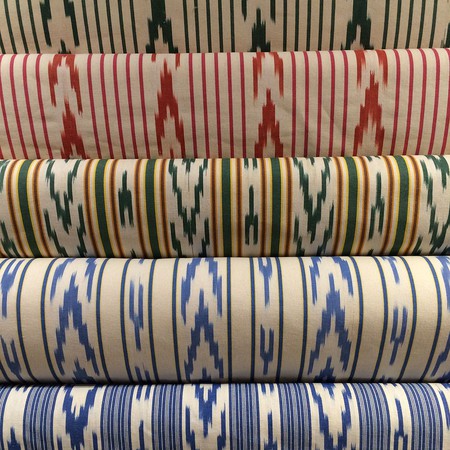 While you might have spotted it adorning the walls of restaurants and hotels, or sold in various forms in gift shops and design stores, you’ll be forgiven for not knowing Mallorca has its own fabric. But why this particular style and how did it get to the island?

The word ikat refers to both the production method and the fabric. It is a resist dye technique which is a process of binding the fabric before applying dye, this prevents colour from running into certain areas of the fabric. The resulting pattern makes the fabric instantly recognisable as ikat.

Bought a classic #IkatMallorca to make a vest of, back home.

Found in cultures as far flung as Mexico, Afghanistan, India and Indonesia, ikat’s popularity in Europe was largely due to the opening up of the Silk Route – a trade route of European and Asian merchants established in the 5th Century. By the 13th century, these traders were bringing looms and Asian textile manufacturing processes to Europe. Symbolic of worldly culture and opulence, these exotic fabrics soon became popular amongst the wealthy social classes of Italy and France.

After its adoption of the technique in France and Italy, ikat came to Mallorca. The earliest known Mallorcan made ikat dates back to the 18th century with clear evidence of French and Italian style in its design.

During that time it was popular with wealthy Mallorcan households. Still expensive to make due to manual production methods, these ‘cloths of tongues’ were symbols of prosperity and status. It was only after the arrival of the loom, when cost of manufacture dropped considerably, that less wealthy Mallorcans were able to afford to buy the fabric too.

Manufacturing continued in Europe up until the Second World War. Sadly, once peace returned, ikat never regained its pre-war popularity, which left Mallorca as the only place in Europe where it was and still is made.

Over time Mallorca has developed its own ikat identity. Very much a descendant of the original ikats, it is known locally as tela de llengüe or roba de llengos meaning ‘cloth of tongues’ in reference to the designs or tongues of flames.

This is a strong fabric with an identical pattern on both sides and has been adapted for clothes, upholstery and interiors.

There are several manufacturers in Mallorca who still use the authentic ikat techniques, they are fine examples of family-run businesses, some of which have been operating for over 160 years. The main ones are Teixits Vicens in Pollensa, Teixits Riera in Lloseta, and Artisanal Textil Bujosa in Santa Maria.