Málaga’s stunning port is the oldest continually used port in Europe, and has a fascinating history. Nowadays it’s one of the most important ports on the Iberian mainland for cruise liners, and is popular with passengers, who can be in the historic city centre within just ten minutes of leaving their floating cities.

Málaga’s port was first established when the Phoenicians occupied the city in 1,000 BC. Back then, it was a trading port, specialising in exports sourced from the surrounding countryside. From the beginning of the 2nd century AD, the city (known then as Malaka) was under Roman rule, and its port flourished as a commercial gateway to the rest of the Roman Empire, exporting copper and lead from the mines of Ronda as well as minerals, pottery, almonds, olive oil and wine. Another key export was a fish-based pickle called garum, which was a popular accompaniment to fish dishes throughout the Roman Empire and which was distributed throughout its vast territories via Málaga. 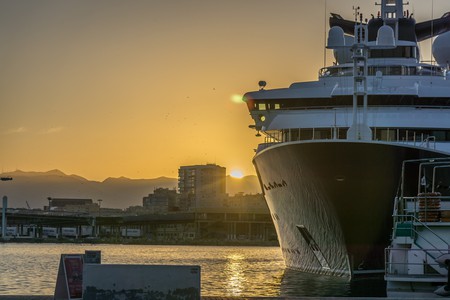 When Malaka was taken by the Moors in 711 AD, the port continued to be an important source of trading for a city now renamed Malaqah. In 1026, Malaqah became the capital of its own independent Muslim Kingdom, the Taifa of Malaqah, and during the decades that followed, it traded profitably with the Arabic territories of the Maghreb (North Africa) and the rest of the Mediterranean by means of its gradually expanding port. At this time, the city had a thriving pottery industry. Particularly popular and profitable were ornamental terracotta vases known as Málagan lustreware.

The city’s international status was further enhanced when it was captured in 1239 by the Nasrid Dynasty, rulers of the kingdom of Granada. This is when Málaga’s port really swung into action as a major centre of commerce, owing to two principal developments: firstly, the trade agreement forged in 1279 between the city’s Moorish ruler, Muhammad II, and the Republic of Genoa, which granted Genoese traders privileged commercial rights to use the port, at a high price; and secondly, the construction of cavernous, sophisticated shipyards, known as atarazanas, during the latter half of the 14th century. Some of the great Moorish archways of the principal atarazana have survived today and serve as the facade to one of Málaga’s best covered markets, appropriately called the ataranaza market. 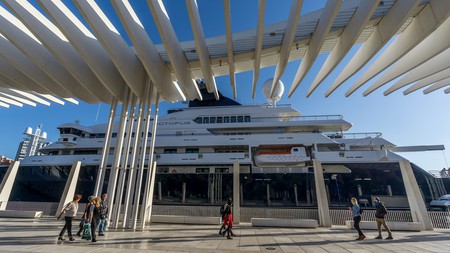 Malaga's port can now accommodate the largest yachts and cruise liners in the world; truszko, flickr

After Malaqah was taken from the Moors by Catholic monarchs Ferdinand and Isabella in 1487, following a gruelling three-month siege of the impregnable Gibralfaro castle, its port remained vital to the city’s prestige, particularly as a military base for the conquest of northern African territories such as Mellila and Oran. Throughout Spain’s Golden Age of the 16th and 17th centuries it was used for the export of cereals, and underwent a major expansion in 1720 under the orders of King Philip V. In 1814, a lighthouse was added. 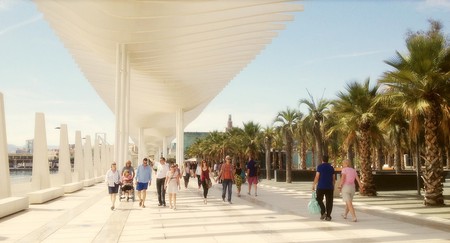 Compared to the centuries that preceded it, the 19th was an uneventful one for Málaga’s great port. Though the first passenger terminal was built in 1910, it suffered from neglect throughout the Franco regime that followed Spain’s brutal Civil War of 1936–39. Yet if you were to visit this wonderful area of Málaga city now, you wouldn’t guess it had ever fallen from grace: over the last 20 years or so, an ambitious renovation project has been steadily expanding the port’s commercial capacities and adding attractions. The world’s biggest cruise liners now frequently dock here; the Muello Uno (Quay 1, opened in 2011) is one of the best places in the city to shop, eat and drink; and the gorgeous ‘Palm Garden of Surprises’ that runs along the main promenade is one of most pleasurable places to stroll.