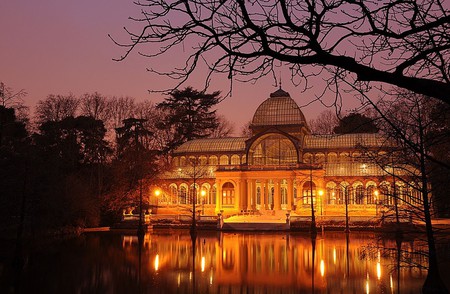 The stunning glass Palacio de Cristal, or the Crystal Palace, is an emblematic structure in Madrid’s Parque del Buen Retiro. The building, erected in 1887, was designed by architect Ricardo Velázquez Bosco and based on a similar structure built in London several years prior. Intricate ceramic furnishings weave around the palace’s ironwork – creating a magnificent bird-cage aesthetic. 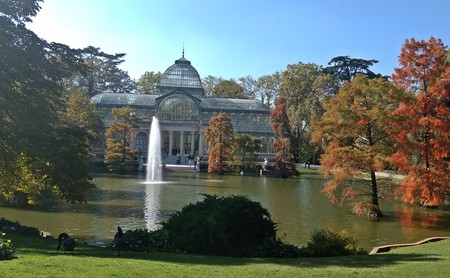 The Palacio de Cristal on a fall afternoon | © Lori Zaino

The building was originally created to showcase tropical plant life from the Philippines which at that time was a Spanish colony. In May of 1936, it was the site of a parliamentary vote for president of the Spanish Republic. Manuel Azaña was elected in the palace, but being the only candidate he didn’t have any competition. In 1975 the structure was renovated, and nowadays it’s a part of the Museo Nacional Centro de Arte Reina Sofía and houses temporary art exhibits.

The Palacio de Cristal definitely gives off a regal air, resembling a large, Gothic cathedral thanks to its cross shape and cupola. The architect Ricardo Velázquez Bosco also helped restore churches such as the famous Cathedrals of Leon and even the Mezquita de Cordoba, once one of the most important mosques in Spain. You can perhaps feel the influence of these powerful churches in the palace’s design.

Strolling through the palace is a lovely afternoon activity, especially on a clear day when warm rays of sunshine stream through the glass cupola (about 22 meters high). Perfectly situated in front of a small lake and fountain spraying up streams of water, the palace and its surroundings give off peaceful, natural vibes.