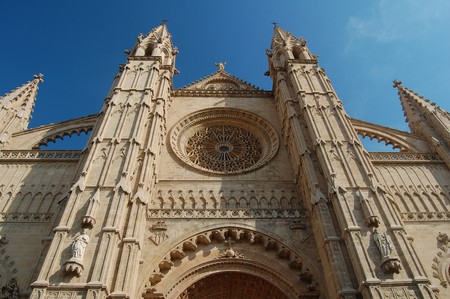 Whether entering the Mallorcan capital by land or sea, it’s almost impossible to not at least catch a glimpse of the spectacular architectural masterpiece that is the Palma Cathedral. Referred to locally as ‘La Seu’, this majestic and iconic structure is the product of a king’s sacred oath, an island conquest, and centuries of construction, restoration and even contributions by a certain revered Catalan architect…

The story of its conception lies with a pious vow made by the then King of Aragon, Jaume I. During a heavy storm and perilous journey to take the island from the Moors, the young monarch promised that if he landed safely and completed his mission he would build a magnificent church in honour of the Virgin Mary. And testimony to the fulfilment of this pledge stands today as the golden sandstone cathedral perched high on Palma‘s old city walls.

While a foundation stone was symbolically placed in 1229 on the chosen site – an imposing seafront setting then occupied by the city’s central mosque – it wasn’t until the beginning of the 14th century (and under the reign of Jaume II, the son of Jaume I) that construction began in earnest. With its building spread over several centuries, various influences from Gothic to Renaissance and Baroque are visible throughout, including reconstructions in the neo-Gothic style following an earthquake in 1851.

In the early 20th century, famed Modernist (and Catalonian son) Antoni Gaudí was also invited to undertake interior renovations in his distinctive Art Nouveau technique. Although these stopped abruptly – and inexplicably – after ten years, they were eventually completed by two successors and remain some of the cathedral’s most distinctive and unique features. Visitors should look out for his spectacular wrought-iron crown-like canopy positioned over the main altar. 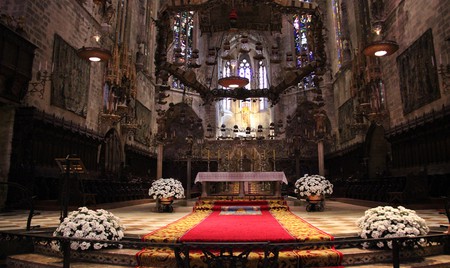 To the trained eye, the overall result might look somewhat patchwork, though at 44 metres (144 feet) tall it’s hard not to be impressed at least by the sheer scale – and covering close to 7,000 square metres (75,000 square feet) it is approximately the same area as Wembley Stadium’s football pitch. Grand flying buttresses, ornate soaring spires, and dozens of stained glass windows – including the huge kaleidoscopic Rose Window – also undeniably elevates La Seu to one of the most striking buildings of its kind.

A quirk of its origins also means that anyone kneeling at the altar does so pointing towards Mecca like a Muslim and not, as is normally the case for Christians, towards Jerusalem.