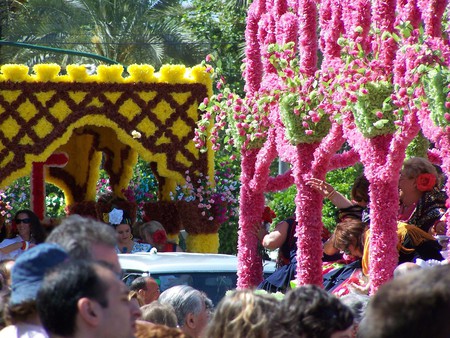 The Andalusian province of Córdoba hosts a number of festivals that are often overlooked in favour of Andalusia’s more famous celebrations. They focus on everything from the flower-filled courtyards of Córdoba city’s oldest buildings to the delicious cured hams for which Spain is famous. Read on for eight underrated yet intriguing festivals in Córdoba, Spain.

Battle of the Flowers

The “Batalla de las Flores” is a one day-event celebrated on the last Sunday of April to mark the beginning of Córdoba’s spring fairs. A procession of around 20 floats, carrying women beautifully attired in typical flamenco dresses – or trajes de gitanas, (“gypsy dresses) – and decorated with paper flowers and images of Córdoba’s patron saint pass along the Paseo de la Victoria. The women throw hundreds of thousands of flowers into the air at the beginning of procession, which are later returned to them by spectators.

The small and attractive feria of the crosses is celebrated over four days at the beginning of May. It commemorates the crucifix on which Jesus was crucified and is believed to have its roots in the 4th century, when Constantine, son of Saint Helen, was helped in battle by a large cross. The Cruces festival sees the squares of Córdoba’s old town prettily decorated with flower-adorned crosses with the locals socialising around makeshift open-air bars that pop up around the city. 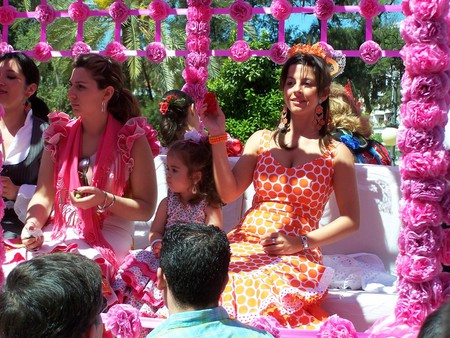 Often overshadowed by Seville’s massive Feria de Abril, Córdoba’s annual (and smaller) spring feria is every bit as colourful and joyful. It runs for a week at the end of May or beginning of June, on a vast sanded fairground – recinto – a couple of miles out of the city, that’s packed with partying marquees called casetas. The entrance to the recinto is a grand arched entrance modelled on those seen in the city’s Mosque-Cathedral and looks spectacular at night. Unlike in Seville, every caseta in Córdoba is open to the public and none are invitation-only.

All though not as well-known, Córdoba’s Easter Week celebrations are just as big a deal as they are in every other major Andalusian city. For seven days the city is taken over with incense-trailing floats bearing Christs and Virgins, followed by drum-and-trumpet-driven bands. The floats are very heavy and it is considered a great honour for members of the city’s different religious bortherhoods to carry them through the streets of Córdoba. Large crowds gather to watch them do so and there is an atmosphere of hushed reverence as they pass. 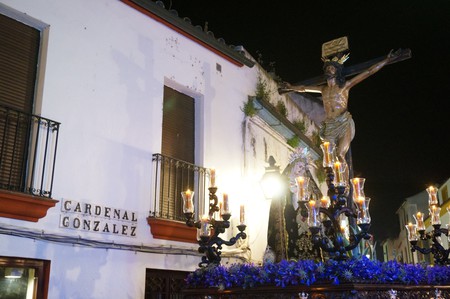 Launched in Córdoba’s beautiful riverside gardens in 2001, this intriguing festival celebrates the Jewish customs and music that have been so influential in shaping the city’s culture over the centuries. Shephardic bands from all over the world audition throughout the year to perform in one of the several concerts that take place over a week in June; in addition to their performances, there are dance workshops, demonstrations of Jewish cooking, wine tastings, lectures and exhibitions. The festival is celebrated in Córdoba’s charming Jewish quarter, Juderia.

If you’re visiting Córdoba’s provincial capital, a trip to the enchanting pueblo blanco of Priego de Córdoba is a must. The town is even more attractive and lively during its annual Royal Fair – a week-long open-air festival held during late August and early September. Dating back to 1842, when (like so many of southern Spain’s fiestas) it began as a livestock market, this is now one of the largest fiestas in provincial Córdoba. A number of casetas are centred around the town centre and local artisans display their wares from temporary stalls throughout the week. 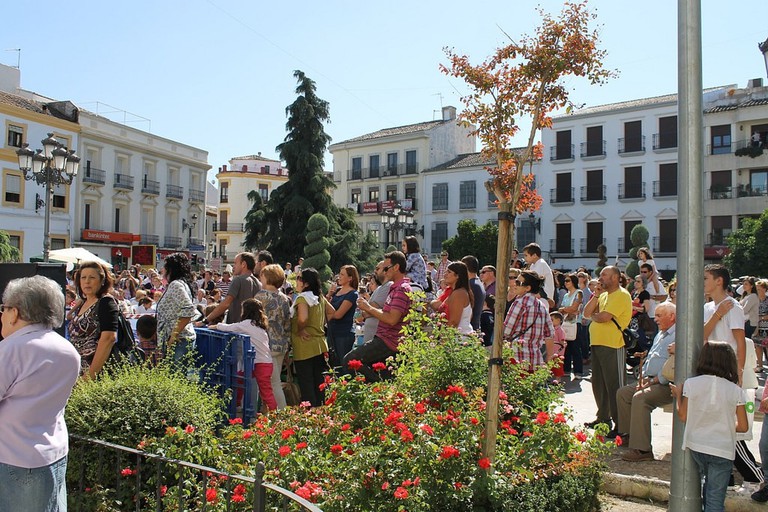 Locals take to the street during the feria in Priego de Córdoba; Luis Eduardo P Tavares/flickr

One of Córdoba’s more obscure musical events is the Slow Music feria, held towards the end of June in the charming village of Pozoblanco. Stars of “light song” appear over the course of this three-day fiesta. which was inaugurated to raise the cultural profile of a town otherwise known for being the place where a famous Spanish matador was fatally gored during a bullfight in 1984. The star performer this year was Miguel Bosé, a Panamanian singer who was once a teen idol in Spain and Italy.

This year, the whitewashed village of Villanueva de Córdoba celebrated its 17th Feria del Jamón Ibérico de Bellota de Los Pedroches. The event, which takes place every October, showcases the finest examples of a produce for which Spain is famous all over the world – namely, the spicy, salty cured hams that make for a delicious tapas when drizzled with olive oil and served on crusty bread. Exhibitors occupy stands in a vast hall whilst marquees outside offer plenty of places to sample the hams along with a tipple of local sherry.