7 Things to Know Before Visiting Ronda

Not for nothing is Ronda the third most-visited destination in southern Spain – its two halves lie either side of the El Tajo gorge and are connected by the spectacular “New Bridge”. Here are a few things worth knowing before you visit this jaw-dropping town.

It’s split in half by the El Tajo gorge

Ronda boasts one of the most extraordinary locations in Spain, sitting as it does each side of the 100 metre (328 foot) deep El Tajo gorge. There is some wonderful walking to be enjoyed in this spectacular cleft in the landscape: from the old town, a dramatic path takes you right down to the bottom of El Tajo, to the foot of the mighty “New Bridge” that spans the canyon.

Its most famous attraction is the “New Bridge”…

Finally completed in 1793 after forty years of construction, the scary yet beautiful Puente Nuevo is Ronda’s most famous attraction. It connects up El Mercadillo (The Market), the newer part of town, with La Ciudad (The Town), the old Moorish quarter and is, quite simply, breathtaking to behold. So dangerous was its construction that 50 workers lost their lives in the process. 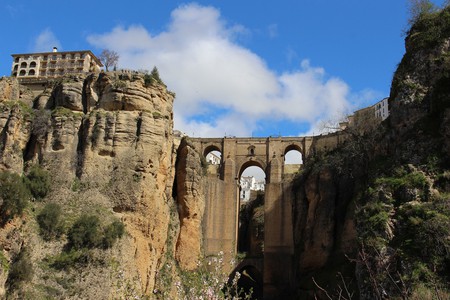 …. But there are also two other bridges

Despite its fame, Ronda’s Puente Nuevo isn’t the only bridge that crosses the El Tajo gorge. It was built to improve upon the town’s two existing bridges – the Puente Viejo (Old Bridge), which dates from 1616, and the Puento Romano, which actually dates from Ronda’s Moorish period, between the 9th and 15th ceturies. Although dwarfed by the Puento Nuevo, both are attractive structures.

Ronda is the birthplace of the modern Spanish bullfight and the hometown of its greatest dynasty. It was here, during the 18th century, that Francisco Romero faced the bull on foot for the first time, rather on horseback. Today, two of the most famous practitioners of the style pioneered by Romero are Cayetano and Francisco Rivera Ordoñez, whose grandfather featured in Hemingway‘s A Dangerous Summer. 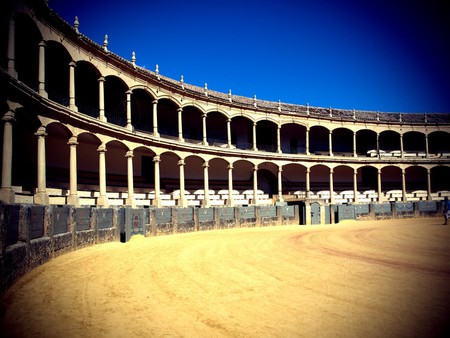 As is fitting for somewhere as steeped in the bulls as Ronda, the town is home to a beautiful bullring. Dating from 1785, this elegant, neo-classical structure is Spain’s oldest plaza de toros: it was designed by Martín de Aldehuela, the celebrated architect also behind Ronda’s stunning New Bridge. Every August, it is the setting for the famous Goyesca bullfight in which the Ordoñez brothers perform.

Watch out for the “Coño” balconies

Strolling along the Paseo E Hemingway, you’ll pass a number of balconies that hang precipitously over the edge of the Tajo gorge. These are known in Spanish slang as “Balcons Coños”, because when you look down you’ll want to exclaim “Coño!” (which literally translated is a very rude word in English, but it’s used liberally in Spanish). Step onto one yourself and you’ll see why. 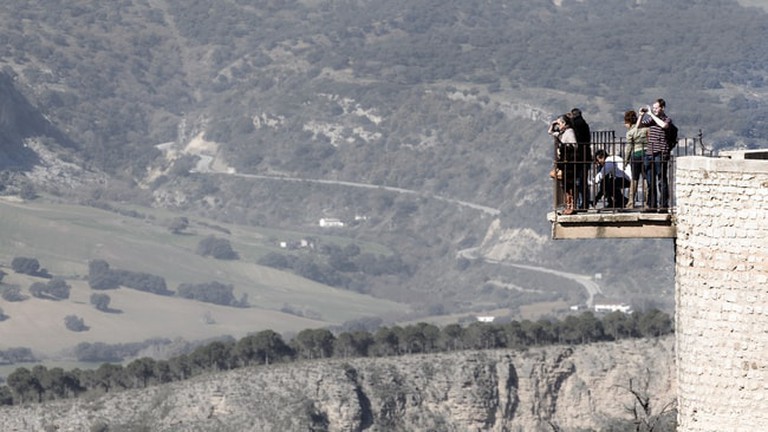 Ever since Roman times, the rugged scenery around Ronda has been used for wine-making. This part of Andalusia is called the Serrania de Ronda, and is particularly known for its delicious reds, although the region also produces whites and rosés. In May, boutique travel agency Toma & Coe launch their Wonderful Wine Weekends tours, which offer a superb insight into wine-making in Ronda.