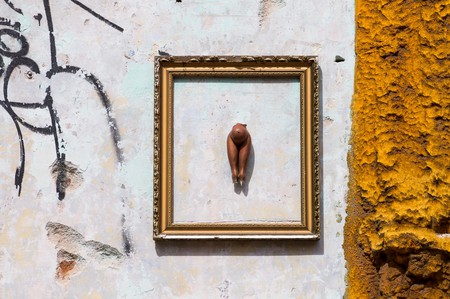 Not that long ago, El Raval was still very much a downtrodden neighbourhood with not much to attract those who didn’t live there. Fast-forward a few years, and El Raval has been given a much needed makeover, offering visitors an eclectic juxtaposition of the old and the new. Here are some of El Raval’s most intriguing buildings and architectural wonders.

If nearly everyone who visits Barcelona has heard of famous architect Antoni Gaudí, not everyone knows that one of his first every commissions is located in El Raval. The Palau Güell, or Güell Palace, was commissioned by Gaudí’s most loyal patron and friend, Eusebi Güell, as a town home for him and his family.

One of the most curious features of this modernist masterpiece are the small viewing windows hidden in the ceiling which enabled the Güell family to get a glimpse of their guests before meeting them and ensure they were dressed appropriately. Equally noteworthy is the main party room’s perforated ceiling which enabled light to shine in from lanterns outside and give the illusion of a starry night. 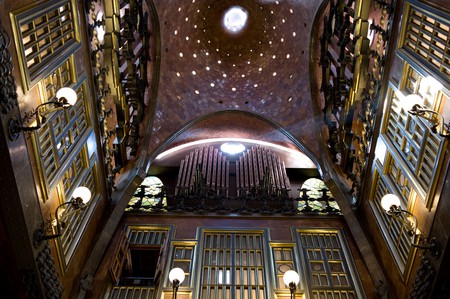 This is one of those old Raval buildings that most people walk past without giving a second glance. Yet, in so doing, they’re walking straight past one of Barcelona’s most charming courtyards and a haven of peace in the midst of the busy streets which surround it. Built in the 15th century, the Hospital de la Santa Creu is a fine example of Catalan Gothic architecture. It boasts a large inner patio which today harbours an outdoor café. A small cloister is surrounded by a vaulted ceiling gallery from where the scent of the nearby orange trees can be enjoyed.

Perhaps one of the most curious facts about the Hospital de la Santa Creu is that this is where Antoni Gaudí died in 1926 after he was hit by a tram. Mistaken for a pauper because of his humble clothing, he was left to die by the side of the road for quite some time until someone eventually recognised him. Gaudí was one of the hospital’s last patients as it was replaced by the Hospital de Sant Pau just a few months later.

In 1989, American artist Keith Haring – best known for his pop-art graffiti in his hometown of New York – visited Barcelona. A year earlier, the artist had discovered that he had AIDS and had since then been exploring social messages through his artwork. Upon visiting Barcelona’s El Raval, at a time when it was still very much rife with prostitution and drug abuse, Haring was inspired to paint a mural for the residents of Barcelona.

Without official permission and in just five hours, Haring painted We Can All Together Stop AIDS, a 30m-long mural originally depicting some people trying to flee the grip of a snake-figure representing AIDS, while others try to destroy it. The mural was originally located on Plaça Salvador Segui, however over the years it was damaged by other graffiti and war by time. Eventually, the mural was recreated on a wall alongside the MACBA, Barcelona’s contemporary art museum, where it can still be seen today. 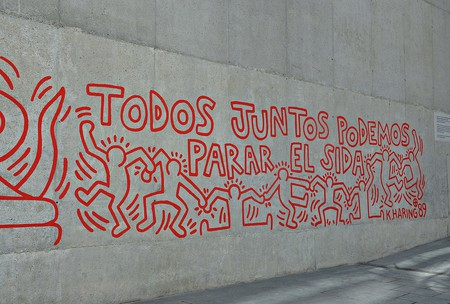 Walk down Carrer Carme, one of the streets of El Raval that runs perpendicular to La Rambla, and eventually you’ll comes across the building known as El Indio. The name comes quite simply from that of the fabric store that had stood here since the early 1870s right up until just a few years ago when it finally closed its doors.

The building immediately catches the eye thanks to its modernist façade, which was given to it in the 1920s by the architect Vilaró i Vall. Mosaic signs above the door enumerate what clients can expect to find inside: wools, lingerie, scarfs and novelties. Many local women learnt to sew with materials bought at El Indio, and whole generations have passed through its doors.

A Tribute to Joan Miró

Born and raised in Barcelona, Joan Miró’s bold, colourful and nearly childlike drawings have become synonymous with Barcelona. Indeed, wanting to give something back to the city, Miró designed a number of large-scale public artworks that are placed around the city, including the Woman and Bird on Plaça Joan Miró and the Pla de l’Os mosaic on La Rambla.

The city also pays homage to Joan Miró, and while art fans will find the Fundació Joan Miró the best place to admire the artist’s work, they should also check out the colourful tribute to Joan Miró by street artist Sergio Hidalgo Paredes , aka Sixe Paredes. Located on the corner of a street in El Raval where a block of flats once stood, has very much become part of the local scenery and is just a further example of the eclectic character of El Raval. 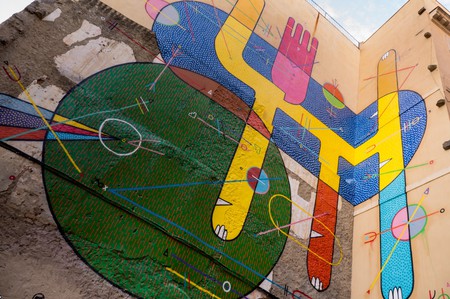 Located just meters from La Rambla, Barcelona’s most famous street, the Hotel España was first opened to the public in 1859 when it was known as the Fonda de España. However, in the late 19th century the hotel was given a makeover by one of Barcelona’s most famous architects and fellow pioneer of Catalan modernism, Lluís Domenech i Montaner, best known for the mesmerising Palau de la Música Catalana.

If over the years the hotel underwent changes as it tried to keep up with the times, in the 2010s the owners decided to restore its original modernist appearance, and it has been refurbished to replicate the original designs. These include stunning coloured mosaic work in the lobby and downstairs waiting areas as well as murals and other ornaments. Yet, few who walk past its doors know that one of the city’s most illustrious architects left his mark here.

When it comes to modern designs in El Raval, Richard Meier‘s MACBA building usually steals the limelight: a custom-designed building that plays with light and space to create ideal exhibition settings and guide visitors through the museum. Yet the nearby CCCB – Barcelona’s centre for contemporary culture – is really just as admirable for giving new life to an existing structure.

The Casa de Caritat was an almshouse and hospice constructed in 1802 and operated as such until 1957. During the time of El Raval’s council-lead urban renewal, architects Helio Piñón and Albert Viaplana were charged with rethinking the building to house the new cultural centre. One of the most remarkable features of the building today is the large glass façade which acts as a mirror reflecting the city to those stood beneath it. 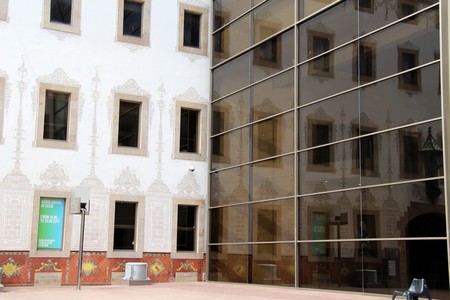