This Sunday (April 22nd) is the 402nd anniversary of the death of the Spanish writer Miguel Cervantes, one of the world’s first modern novelists. To remember this great writer, Culture Trip takes a look at his many-layered masterpiece, Don Quixote: published in two volumes in 1605 and 1615, this classic should be on every traveller’s summer reading list.

Don Quixote is often referred to as a “heavy” work of literature, but it’s packed with farce and slapstick comedy. The passages in which its eponymous hero takes flocks of sheep to be marauding enemies, or windmills for giants intent upon his destruction, or humble rural inns to be great castles – or many other such earnestly-believed delusions – provide frequent, lighthearted intervals throughout the novel. Most amusing of all, perhaps, is the reluctant involvement of Panza, the knight-errant’s long-suffering squire, in Don Quixote’s adventures – or, as his servant calls them, “confounded vagaries”.

It’ll keep you going all summer

Don Quixote is a Big Book, with most editions coming in at just under 800 pages (excluding the notes and introductions that usually accompany the text) – certainly enough to supply you for reading material throughout the summer. Yet despite the work’s length, it never feels like a thankless slog: the chapters are mostly short and Don Quixote’s disastrous “adventures” often read like self-contained short stories, meaning you can pick up from where you left off without having to re-read the preceding chapter(s). 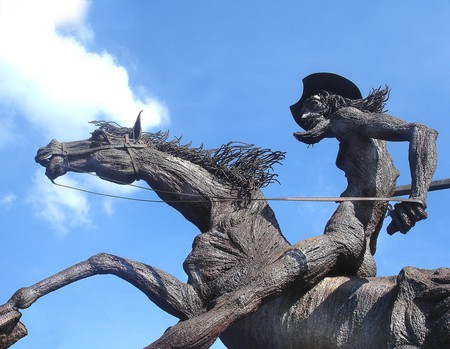 A statue of the famous knight-errant in Cuba | © gabrielmbulla / Pixabay

Amusing as the scrapes into which Don Quixote throws himself often are, this is not just a funny book. Cervantes explores many fascinating themes whilst charting the misadventures of his two heroes, including the nature of friendship and love, virtue and vice, religious belief and, perhaps in a veiled reference to the book itself, the influence that reading can have upon our lives and imaginations. And then, of course, there is the pressing question of the tireless knight-errant’s mental state: is he raving mad, or in fact quite sane? Many of the characters he meets on his travels remark that he appears to be both, inviting us to question the nature of insanity itself.

Cervantes’ masterpiece was one of the first modern novels and is often counted amongst the greatest works of literature ever written. Over the centuries since its publication, the work’s influence has been enormous: artists who have been inspired by Don Quixote range from Franz Kafka to Salvador Dali, Mark Twain to Pablo Picasso. The book has even contributed terms to the English lexicon, such as “quixotic” (the impractical pursuit of fanciful goals) and “tilting at windmills” (battling imaginary adversaries). Culture Trip takes a detailed look at the book’s influence here. 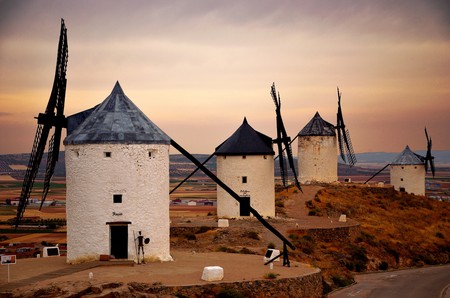 Though Sancho often voices regret at ever having agreed to be Don Quixote’s squire (and for good reason), we, the readers, can enjoy his master’s company at a safe distance. And if he is often the cause of confusion and distress to those around him, Quixote is certainly never boring: whether discoursing with Sancho on his limitless love for Dulcinea – the mysterious lady of high birth for whom he performs his noble feats – or battling vagrants and thieves on the highways of central Spain, he always entertains. In doing so, he arouses our compassion, affection and, not infrequently, our pity.

…as is his squire Panza

The same can be said of his endlessly-loyal servant Sancho, who really comes into his own in the second half of the book. Sancho always has a snappy proverb with which to counsel his master – a source of both amusement and annoyance to Don Quixote – and his attempts to imbue the knight’s richly-detailed fantasies with reality and common sense make for some of the work’s funniest passages. We also become fond of his strong-willed wife and his attractive, witty daughter, who both long for Sancho to be rewarded for his unfaltering services to knight errantry. 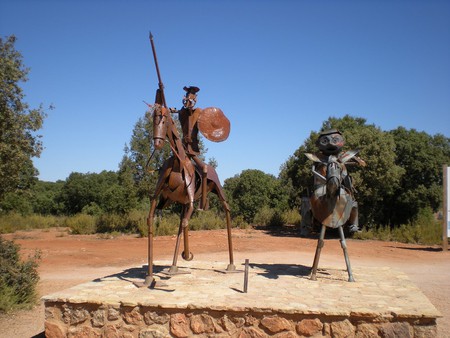 It celebrates the freedom of the open road

Viewed in one way, this great book is a celebration of the freedom of travelling – of the joy of packing your bags and going on a long, unplanned journey. As mad as Don Quixote may often appear, his lifestyle as a “freelance righter of wrongs” – as Christopher Hitchens once described him – will inspire respect in readers who love travelling. All he has is his trusty horse Rozinante, his squire Sancho and the endless plains of central Spain before him. And, of course, his unswerving commitment to rescuing those in trouble, even if it means taking on any number of enraged windmills. Sorry – “giants”.