6 Traditional Foods You Have to Try in Seville 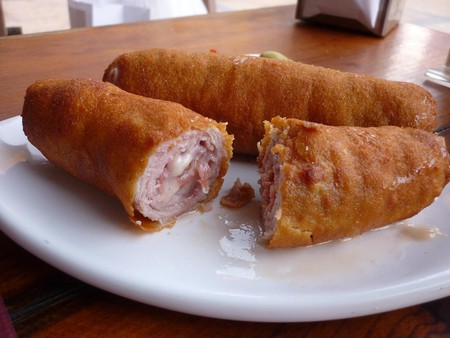 The best traditional dishes in Seville are so simple they can sound almost bland when encountered on a menu. But the inspired marriage of ingredients, slow-cooking techniques and nuanced use of spices and seasoning, for which Andalusian cuisine is known, mean they´ll provide some unforgettably tasty memories of your trip to Seville.

One of the most powerfully flavourful dishes you are likely to try in Seville is stewed rabo/cola de toro, or bull’s tail. The tail is divided into thick segments and slow-cooked for hours, in a sauce of red wine, stock and vegetables (usually onion and carrots, but the exact recipe varies from place to place). The result is meat so tender that it collapses upon contact with your fork and a rich, sultry flavour that has few comparisons in Spanish cuisine. The bars around Seville’s historic bullring are the best places to try this traditional dish, as you can enjoy it in its proper context – whilst gazing upon walls plastered with bullfighting paraphernalia and mounted bull’s heads. The tail is usually served with crispy fries and wedges of bread to mop up the exquisitely good sauce. 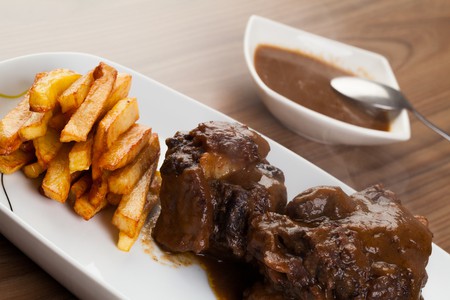 Almost certainly the result of a drunken late night cooking experiment centuries ago, solomillo al whiskey – fried pork loin in a whiskey sauce – is a staple of Seville’s more traditional tapas bars, especially those in Triana. For this classic dish, thin slices of loin are flash-fried in a whiskey reduction, usually with a little garlic and olive oil, and served with the usual carb-fest of bread and chips. The sauce, as you’d image, has a deliciously sweet kick and brings to life what can sometimes be a slightly dull cut of meat. Best enjoyed in a noisy, crowded tapas bar at lunchtime, accompanied by a glass of white wine or sherry.

Resembling elongated croquetas, these decadent, meaty snacks are a must-try when you’re in the Andalusian capital. If we were being pedantic, Flamenquines, or Little Flemishes (more on the preposterous name in a second), shouldn’t really be on this list as they originated in Cordoba – but Seville’s tapas bars all put their own spin on this Andalusian classic. Slices of Iberian cured ham and chunks of goats cheese (the type of cheese varies, but goats cheese is the best) are rolled in pork loin, dipped in beaten egg and breadcrumbs, and then deep fried. This is perhaps not one of Seville’s healthiest dishes, but you’ll have to forget about that and try it anyway. Supposedly, it is named after Charles V´s Flemish assistants, whose light hair and complexions were a similar colour to the Flamenquine’s exterior.

Sevillanos aren’t big on vegetarian dishes, but this is one of the best and it appears on menus in most of the city’s tapas joints. Espinacas con Garbanzos, or spinach with chickpeas, might not sound particularly exciting but the dish is yet another instance of how well the most humble ingredients are combined and cooked in Andalusian cuisine. The wilted spinach is mixed together with boiled chickpeas, generous amounts of seasoning and hints of turmeric and cumin – a telltale sign of southern Spain’s Arabic heritage – to create a surprisingly filling tapas. Usually served with a wedge of fried bread, a decent-sized dish of this Sevillano veggie staple will satisfy even the most dedicated of carnivores.

When Spaniards say they use all parts of the animal they’re cooking, they’re not messing around. If pig’s trotters sounds like a step too far, opt for carrillada de cerdo, or pig’s cheeks, instead. Like bull’s tail, these delicious chunks of meat are slow-cooked in a rich tomato-based sauce, with onion and root vegetables, for maximum tenderness and flavour. This is a popular dish with the locals in Seville and is best enjoyed as a main course with a good red wine. Delicious proof that some of the best cuts of meat are found on the most unlikely parts of an animal. Pigs testicles, incidentally, can be found on the menu elsewhere in southern Spain. 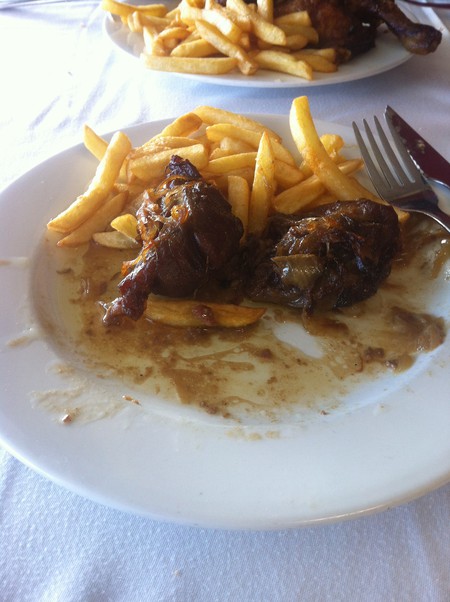 Lurking somewhere on every menu in Seville is a dish that sounds more like something you’d order from a kebab shop at 3am than for a tasty snack, but you would be wise to try it anyway. Carne en salsa, literally “meat in sauce”, is the generic name given to the stewed meats that are cooked to perfection by every local tapas bar in Andalusia. Seville is no exception and offers a huge range of places to try this incredibly satisfying and flavoursome classic. The meat is usually pork or beef, and it’s perfectly-seasoned (sometimes with a little paprika) before being cooked slowly and lovingly in tomato and red-wine based sauces that vary from place-to-place, but which always leave you wanting more. The tender chunks of meat are usually served with crispy fries and bread and best washed down with a cold beer or glass of red wine.