6 Reasons Why You Should Visit Córdoba, Spain at Least Once in Your Lifetime

Encarni Novillo
Sometimes overlooked as a city-break destination in favour of Granada or Seville, Córdoba is one of Andalusia’s most fascinating cities. From its unique Feria de los Patios to the mighty Mosque-Cathedral, the city’s cultural and historic offering means it deserves a place on everyone’s bucket list.

Every May, the courtyards and patios of houses in the old quarter of Córdoba are opened to the public for the city’s Feria de los Patios, in which locals compete for the honour of having the prettiest space (a prize is awarded at the end of the month). This is Córdoba’s most unique cultural offering and something you won’t see in any other Spanish city. Designed, grown and arranged throughout the year, the patios are romantic oases of cool and colour, where the placement of every bright-red pot of geraniums has been carefully thought out. Owners are often on hand and delighted to talk to you about the varieties of flowers and plants adorning their courtyards’ walls, and in some of the larger spaces live flamenco guitar is performed as you wander. UNESCO recognised the unique charm of the patios feria when it declared the event protected cultural patrimony in 2012.

Most cities in southern Spain have monuments from their periods under Moorish and – subsequently – Christian rule, but nowhere are they combined in the same structure as they are in Córdoba. The city’s Mosque-Cathedral is the greatest dual-identity monument in Spain and a powerful symbol of the two cultures that have shaped Andalusia. After the Moors captured Córdoba in 711, what had previously been a Visigoth Christian church was split in two and used by both Christians and Muslims as a place of worship. But in 784, on the orders of the Emir Abd al-Rahman, the church was destroyed and work on a great mosque began. Construction lasted for over two centuries and the building was eventually completed in 987, by which point Córdoba was the most important city in the Islamic Kingdom.

When the city was reclaimed by Christians in 1236, the mosque was converted into a church and in the 16th century Charles V added a great Renaissance nave right on top of the original Moorish structure. The mosque’s most-photographed aspect is its vast main hall, which is supported by over 850 double-arched columns. Sunlight and shadows create unusual effects as you wander among them, contemplating the multifaceted history of this great building. 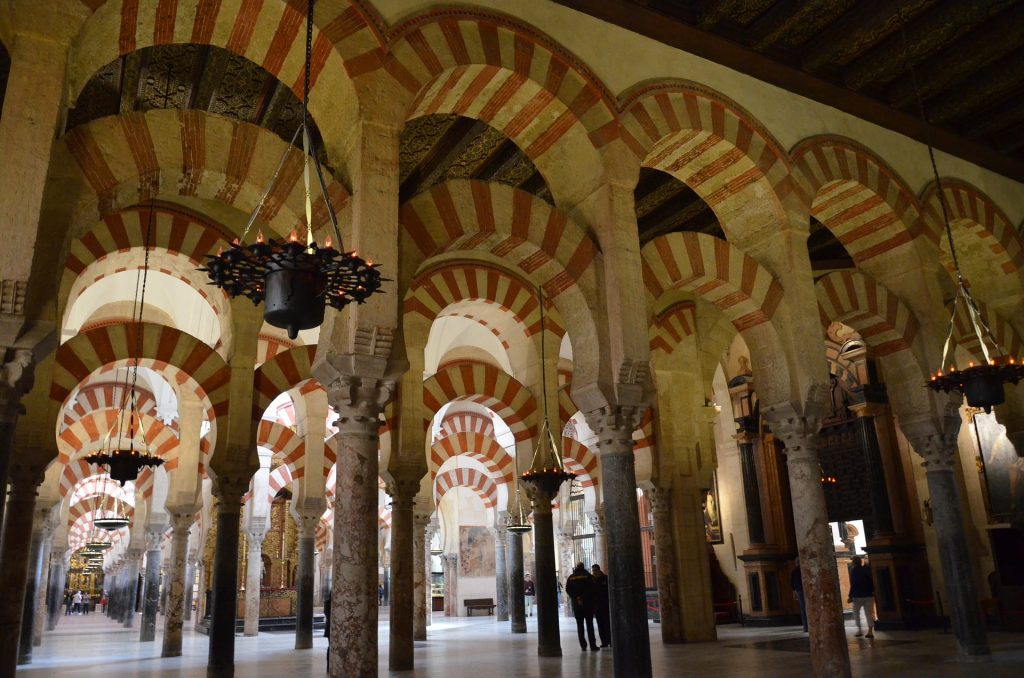 Building
A courtyard in the Palacio de Viana | © elaios2008/flickr | © elaios2008/flickr
The star of Córdoba’s patios feria is the opulent 15th century Palacio de Viana, a vast building used over the centuries as a residence for Spanish royalty. For an admission price of five euros, you can access all of Viana’s thirteen patios and gardens – intricately designed and aromatically populated with colourful plants, flowers and trees, these are some of Córdoba’s most gorgeous public spaces. Their cultivation has taken centuries: the Patio of the Oranges, for example, served as the palace’s entrance in the 15th century (now it is the third courtyard you come to), whilst the Alhambra-like Patio of the Columns was only added in the 1980s as a space for events and celebrations (it’s now 6th in the running order). Allow a good hour to slowly wander around these scented, romantic spaces, peering in through the palace’s old windows as you go; another age of louche affluence and amorous intrigue, once played out amongst Viana’s orange trees and jasmines, comes instantly back to life.
More Info
Open In Google Maps
2 Plaza de Don Gome, Córdoba, Andalucía, 14001, Spain
+34957496741
Visit website

Snaking through Córdoba is the Guadalquivir river, the murky green waters of which flow down through Andalusia and its capital Seville before emptying out into the Atlantic. The Guadalquivir played a crucial role in enriching the Spanish Empire in the 16th and 17th centuries, as its river port (the only one in Spain) provided privileged access to the newly discovered Americas. Crossing the river is Cordoba’s famous Roman bridge – a great viewpoint from which to survey the mighty Mosque-Cathedral as well as the distinctively green and hilly landscape that surrounds the city. This verdant countryside is pleasant change from the sun-scorched, mountainous terrain that usually prevails in Andalausia.

A visit to the Alcazar de los Reyes Cristianos (“Castle of the Christian Kings”) is a must if you’re in Córdoba. As its name suggests, the construction of this royal palace was ordered by the Catholic King Alfonso XI of Castile in 1328 but – as is so often the case in Andalusia – it was built amongst the ruins of a vast Moorish fort. In the late 10th century, when the Islamic Kingdom was at the height of its powers, Córdoba was the kingdom’s – and indeed one of the world’s – great intellectual cities, and the Alcazar housed the largest library in the west. Though Alfonso used only a fraction of the remains of the original Moorish structure in building the Alcazar, he chose a Mudejar style, meaning the Moorish feel of the site has been preserved. 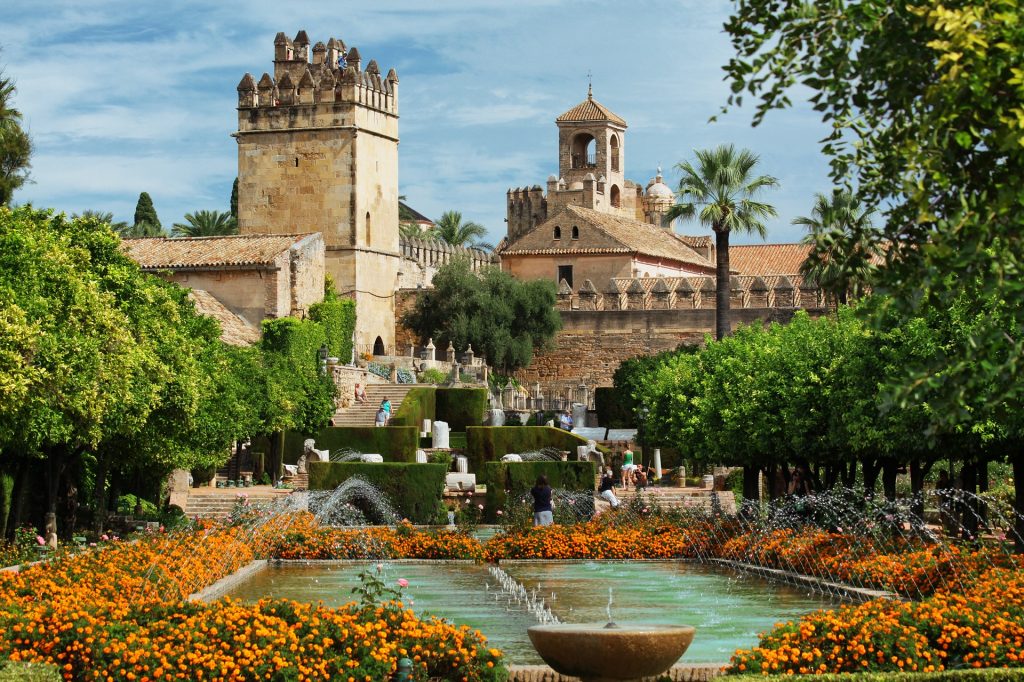 Córdoba’s beautiful historic centre is bound by the Guadalquivir river to the south and the Avenida de las Ollerias to the north. Even when compared to the oldest neighbourhoods of other major Andalusian cities, Córdoba’s is conspicuously charming, with its scrunched-together white houses decorated with pots of aromatic jasmine and geraniums. Particularly attractive in this respect is the Calleja de las Flores, a narrow, winding lane lined with what must be some of the prettiest and most colourful houses in southern Spain. Whilst wandering, keep your eyes open for this barrio’s hidden treasures – namely, the private patios and courtyards that are opened to the public every May for the city’s enchanting Feria de los Patios. Juderia, the city’s former Jewish quarter, extends in a tangle of cobbled streets and squares to the north of the Mosque-Cathedral and is also well worth exploring. 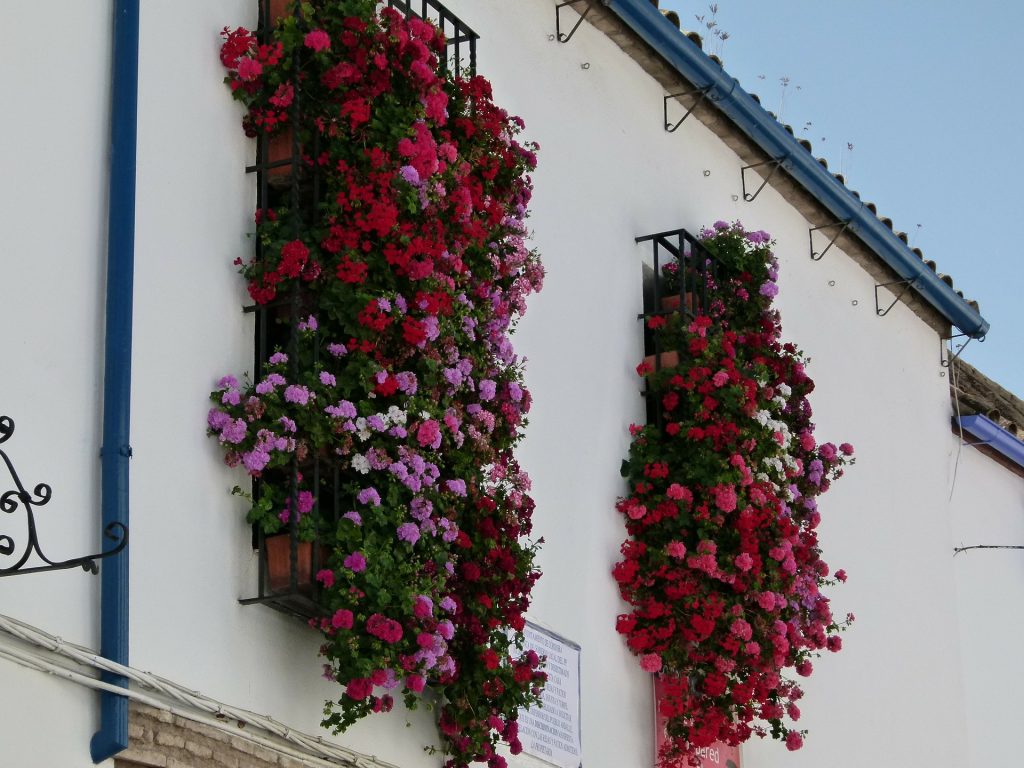 Building facade in the old part of Córdoba; tpsdave, pixabay