6 Fashion Designers From Granada You Need to Know About

Pexels, pixabay
Granada is a city known more for an arty, bohemian ambiance than for high fashion. Nevertheless, the city is home to the studios of some of the most innovative names in Spanish fashion; from a shoe-designer still only in her twenties to Granada’s leading flamenco outlet, these are the names every fashion-lover needs on their radar.

Shop, Store
Claudina Mata is now one of Spain’s leading fashion designers, with her work on sale in high-class clothing boutiques the length and breadth of the country. Working from a studio in the centre of Granada, next door to the city’s giant Corte Ingles department store, Mata produces women’s clothing and accessories that have won her some of the most prestigious fashion prizes in Spain: in 2012, she received a Mention of Honour in the Young Andalusian Fashion Designers awards as well as First Prize in Barcelona’s hugely competitive Brandery fashion show. Three years later, in 2015, she consolidated her success with another two awards for haute couture and business excellence in fashion. Mata specialises in evening wear and bridal wear, and garments can be made to specification in her Granada studio.
More Info
Open In Google Maps
1C, 48 Calle Acera del Darro, Granada, Andalucía, 18005, Spain
+34693231114
Visit website

Though only beginning her career as a fashion designer five years ago (when she was 25), Granada-born Beatriz Peñalver has enjoyed remarkable success to date. In 2013, Peñalver’s fashion film Quimera won a prize at San Diego’s prestigious La Joya fashion film festival and the next year the young designer presented her debut collection – she’s released seven to date – at the New York Fashion Week, one of the most important events on the fashion calendar. Not bad for a Business Studies graduate who at that point had only been in fashion for a year or so. Her latest collection – 2017’s “Red” – is a range of chic, colourful dresses and tops; the garments aren’t cheap – t-shirts start at around $200 – but nor would you expect them to be, given that Peñalver is one of Spain’s most exciting designers.

Store
Pilar Dalbat is one of the classiest names in Spanish fashion, and her designs are sold in over 100 outlets across Spain as well as internationally. Dalbat started her career in fashion as a buyer for a major clothing outlet in Paris in the 1990s, before returning to her beloved Granada in 2000 to start her own fashion brand; 17 years on, after achieving worldwide recognition for her work, every garment bearing the Pilar Dalbat label is still designed and made in her central Granada studio. In addition to her seasonal collections, Dalbat specialises in wedding dresses (also handmade in the Granada workshop) and has designed costumes for stars of TV, cinema and music in Spain.
More Info
Open In Google Maps
1 Calle Buensuceso, Granada, Andalucía, 18002, Spain
+34958520029
Visit website

Shop, Store
If you’re heading up to Albaicín to explore Granada’s oldest neighbourhood, stop off at Reez, a small studio and shop about halfway up the Cuesta del Chapiz hill. This is not a clothing label, but nevertheless deserves its place in this article owing to the quality and originality of its offering. Reez’s speciality is handmade glassware – exquisite jewellery, vases, glasses, bowls and bottles – all designed and made on the premises by owners and artisans Juan and Celia. You can also visit the shop’s studio and workshop and see Juan and Celia crafting the beautiful glass products on sale in the shop.
More Info
Open In Google Maps
2 Placeta Albaida, Granada, Andalucía, 18010, Spain
+34605173373
Visit website

Still only in her late 20s, Karolina Fresneda is one of Spain’s top shoe designers. Born in Granada in 1988, Fresneda first worked in the bridal sector before launching her own brand, the success of which she says is owed largely to listening to exactly what her clients want and thereby creating their “dream shoe”. As a result of the expertise she gained working in the bridal sector, footwear for weddings is a core aspect of the Fresneda offering, but shoes for absolutely any occasion can be made from scratch in the Granada studio (although orders must be made through the website). The designer has also made an attractive collection of flamenco footwear.

Mother and daughter designers María Isabel Hita Luzón and María Isabel Arcos are the talents behind Granada’s leading flamenco fashion designer, Hita y Arcos. Providing a stylish and innovative range of the world-famous dresses – known as trajes de gitanas, or “gypsy dresses” – as well as all manner of flamenco accessories, this is the place where Granadinos without the constraints of a budget go to be dressed for the city’s annual June feria. 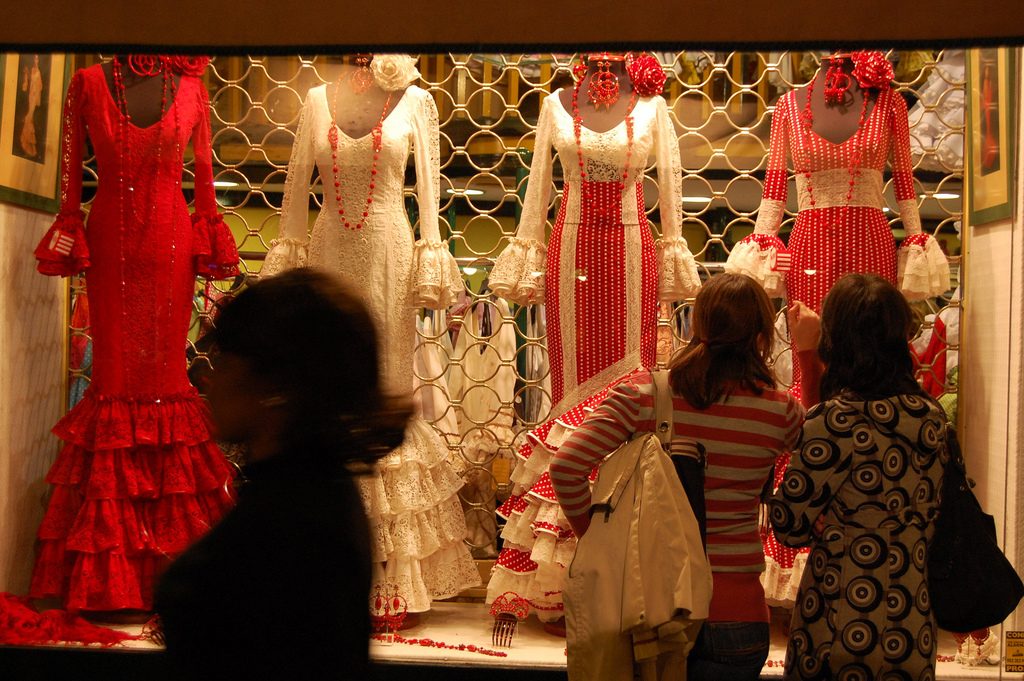