6 Fashion Boutiques in Granada for a Slice of Spanish Style

6 Fashion Boutiques in Granada for a Slice of Spanish Style

Nick Kenrick, flickr
Though a city more known for its arty, bohemian ambiance than for high fashion, Granada is nevertheless home to a number of stylish boutiques. Whether you’re after one of your very own traje de gitanas – flamenco dresses – Moorish-style garments or an elegant summer dress, these are the places to head in Granada.

You wouldn’t necessarily think to look for fashion boutiques in Zaidin, a down-at-heel residential quarter a good 20 minute walk out of central Granada. Yet for shopping junkies it’s worth the journey, because this barrio is home to the delightful CUCA boutique, which sells a range of vaguely-vintage style clothes, accessories and shoes for women. It’s particularly good for the light, elegant summer dresses favoured by women in Granada during summer, which are on sale at Cuca for less money than the big stores in the city centre, but every bit as classy.

Granada’s Arabic heritage is the richest in Andalusia, as is evident from a stroll up the mini-souk that is Calle Calderia Nueva. Leading off Calle Elvira and up into the old Arabic quarter of Albaicin, this narrow, cobbled street is lined with Arabic boutiques selling clothing, jewellery and bags. Along with the Alcaiceria market, this is the best place to head if you want to buy an item of clothing that reflects the Moorish aspect of Granada’s history and culture. On Calle Calderia you can also – if you feel it’s not too tacky – have your name written out in Arabic for a couple of euros. 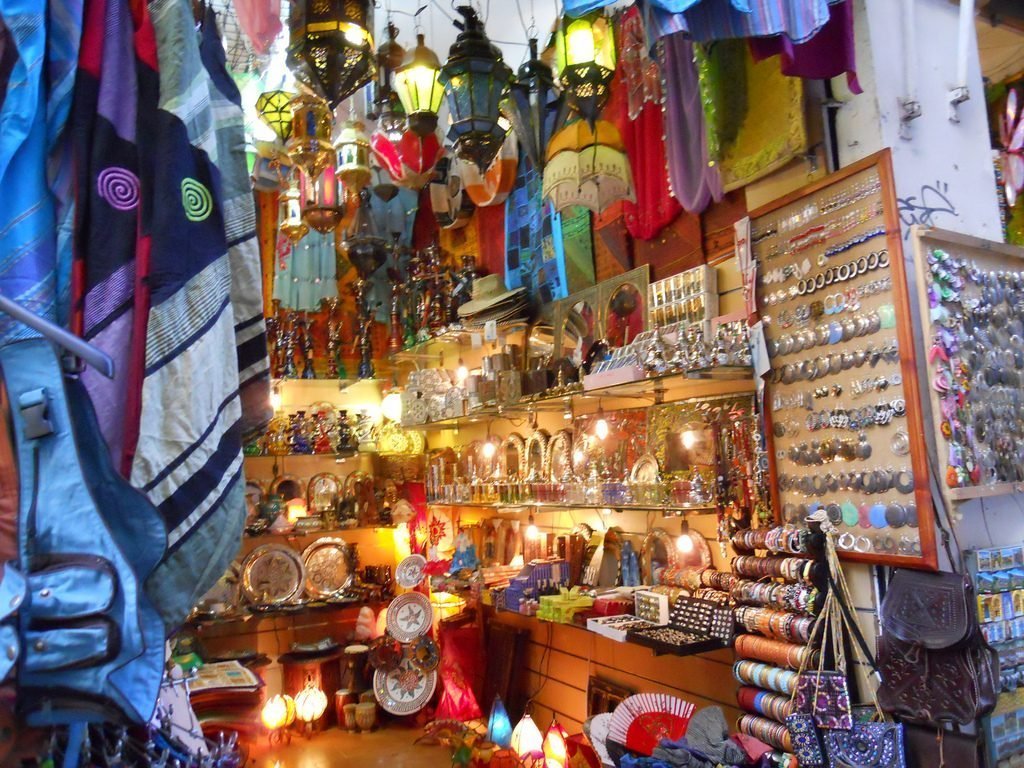 Market
Graada's Alcaiceria market, formerly the city's Grand Bazaar | © Oyvind Holmstad
Now confined to a few narrow alleyways between the cathedral and Plaza Bib-Rambla, the Alcaiceria used to be Granada’s Grand Bazaar. Here, on a site that originally stretched all the way to Plaza Nueva, the finest herbs and spices from north Africa were sold alongside Arabic silks, fabrics and ceramics. The Grand Bazaar burnt down in the 19th century – owing to a fire in a matchstick factory, of all things – and although the modern-day Alcaiceria is a fraction of the size of its sprawling predecessor, it’s still home to some great little boutique stalls selling shawls, scarves, jewellery and handbags bearing handwoven Moorish designs. Alcaiceria Market, 1 Calle Alcaiceria, Granada, Spain, +
Perhaps the best way to sartorially commemorate a trip to Andlausia is to treat yourself to a flamenco-themed item of clothing. The stunning flamenco dresses – known as trajes de gitanas, or “gypsy dresses” – are worn by women every June for Granada’s week-long feria, and are one of the fair’s most striking and beautiful sights. If you’re thinking of blending in with them, head to El Rocio, said by many Granadinos to be the best flamenco fashion boutique in town. Located just off the picturesque Plaza Romanilla in the city centre, Rocio has off-the-peg dresses or can make them to order, as well as the full range of flamenco accessories, including shoes. Nothing will say you’ve been to Granada quite like something purchased here.
More Info
Open In Google Maps
3, 1 Calle Alcaiceria, Granada, Andalucía, 18001, Spain
+34958229045
Visit website
Give us feedback

Post Office, Store
Most of the shops in this part of Granada are high-street chains, but Alexandre is a bit different. Founded in 1967, this funky boutique always has something unique and eye-catching in its window. Inside, a huge range of women’s clothing, bags, shoes and accessories are on sale in a variety of different styles, from shabby-chic vintage to cocktail dresses for the smartest of occasions. The main store is a stone’s throw from the Correos post office on the Puerta Real de España and there’s a second, smaller outlet on the shopping thoroughfare of Calle Puentezuelas. Definitely the place to head for a slice of Granada-chic with a difference.
More Info
Open In Google Maps
16 Calle Puentezuelas, Granada, Andalucía, 18002, Spain
+34958263696
Visit website
Give us feedback

Store
Munira Leather, Granada | Courtesy of Munira Leather
Situated on the central square of Plaza Nueva, the quality of Munira‘s items distinguishes it from the tacky souvenir shops that surround it. This is more of a gift store than a clothing store, but it’s still one of the best places in the city for high-quality leather handbags, handmade jewellery and scarves bearing exquisite Moorish patterns.
More Info
Open In Google Maps
15 Plaza Nueva, Granada, Andalucía, 18009, Spain
+34958216531
Visit website
Give us feedback
Give us feedback