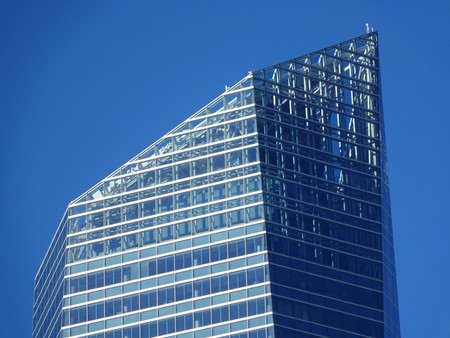 Madrid isn’t really known for its modern architecture, especially when compared to other cities. Barcelona’s Gaudi-inspired buildings bring in the crowds, the Basque country Bilbao boasts the Guggenheim museum, and Andalusia, Seville has the famous ‘Metropol Parasol‘ – or as the locals call it, the ‘mushroom’ – the biggest wooden structure in the world. Madrid’s distinctive modern architectural history is best exemplified by the following five towers, all of which have been structural icons of the latter-half of the 20th century.

These very distinctive 23-storey towers on the eastern edge of Madrid are the first architectural monuments that will be seen if arriving by road from the airport. Rising 71 meters from the Avenida de América, the ‘Torres Blancas’ are an extraordinary fusion of the Brutalist and Organic styles of the 1950s to 1970s. White marble dust was mixed to the concrete during construction, hence the name ‘White Towers’, but now they are an austere-looking grey, like something from a science-fiction movie. 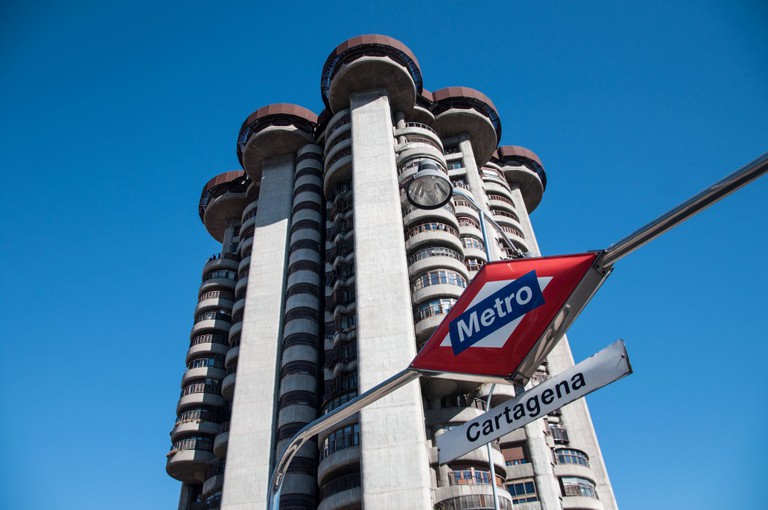 The design was conceived in 1961 by the most influential Spanish architect of the second half of the 20th century, Francisco Javier Saenz de Oiza. Completed in 1968, they are Brutalist in their imposing concrete presence yet Organic in their very tree-like aspect. The towers have a cylindrical appearance and the circular balconies and apartments seemingly grow from the ‘trunk’ like mushrooms.

The towers are a clear diversion from the neo-classical architecture preferred by Spain’s Francoist dictatorship (1939-1975). Even the inside is no less peculiar. Entering the lobby is like entering Bilbo Baggins’ hobbit-hole. Large circular indentations from the structures above invade the space like giant cheese rounds. The staircase, unsurprisingly, spirals up all the way to the roof, a space that comprises a communal living area with gardens and a pool. 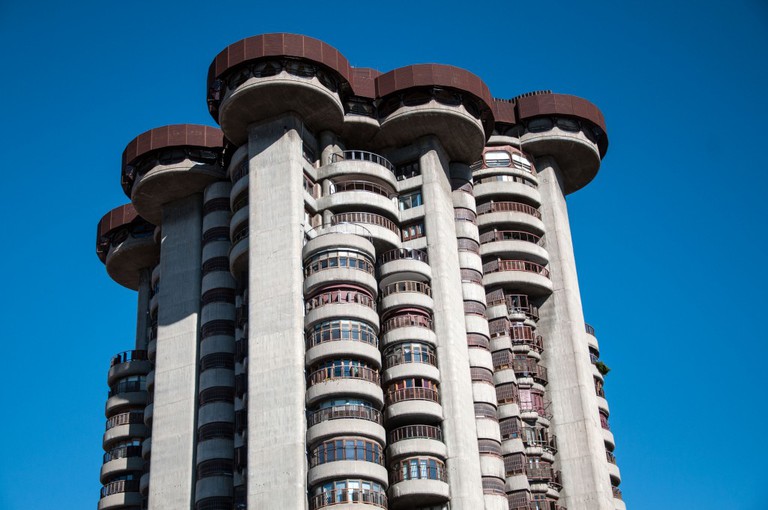 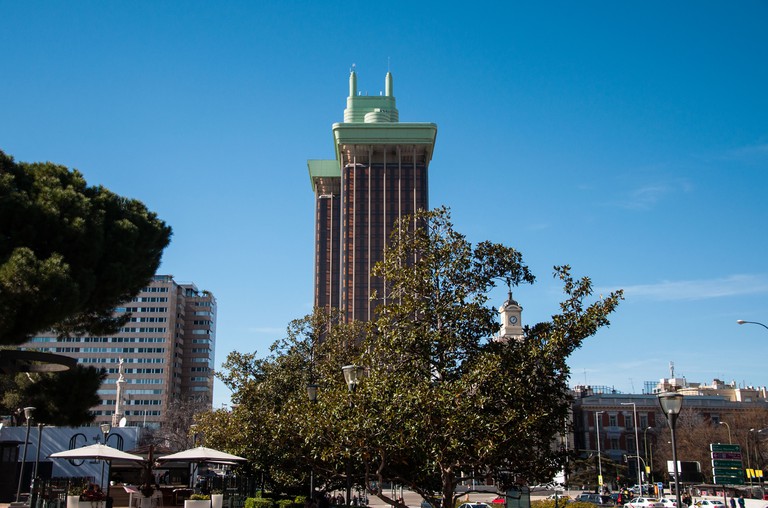 Torres de Colón, Madrid | ©sergeantpluck/flickr
There is, perhaps, no other building in Madrid that screams ‘1970s’ more than the twin ‘Towers of Columbus’. Owned by insurance giant ‘Mutua Madrileña’, these 116m-high edifices on the ‘Plaza de Colón’ are among the most recognizable on the Madrid skyline.Designed by architect Antonio Lamela in 1968 and completed in 1976, the ‘Torres de Colón’ are an example of the postmodernist architectural movement. Lamela deconstructed modernist architectural logic to its most extreme form by building from the top down. Initially, two concrete pillars were erected and a square platform built on top of each. The floors were then installed downwards around these ‘spines’. Only the basements and the lower six floors were constructed upwards.The ‘Torres de Colón’ are known locally as ‘el Enchufe’, or ‘the Plug’. The green art deco-style cover (that was added in the 1990s) looks like a giant electrical plug. With their copper and smoked glass façade, the ‘Torres de Colón’ could be considered too 1970s, too ugly and unfashionable. As such, they inspire as much shame as they do pride among the city’s inhabitants. Nevertheless, love them or hate them, they remain an icon of Madrid’s urban landscape.
Metro: Colon (Line 4)
Open In Google Maps
2 Calle de Génova, Madrid, Comunidad de Madrid, 28010, Spain
+34914544410
Visit Website
Give us feedback 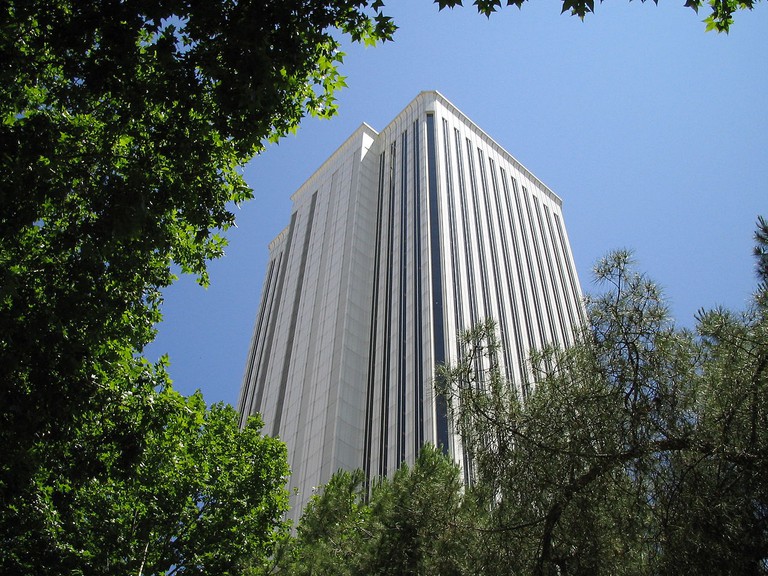 Torre Picasso, Madrid | ©wikicommons
Completed in 1988 and standing at 157m high, the Torre Picasso is easily seen from any viewpoint that shows the Madrid skyline. Designed by Japanese-American architect Minoru Yamasaki (1912-1988), one of the 20th century’s most famous architects – whose most famous work was the twin towers of New York City’s World Trade Center – the Torre Picasso is an example of the New Formalism style of architecture.The almost-square footprint of the tower (38m x 40m) gives it a very columnar appearance, especially with the windowless two-storey base and the classical cornice on top. Indeed, New Formalism seeks to echo the symmetry and balance of the classic forms of Greek or Roman architecture, yet with the utilization of modern materials. The facade of the Torre Picasso is of paired windows each separated by a narrow strip of aluminum. This shines white in the Madrid sun to make the Torre Picasso a notable landmark alongside the Paseo de la Castellana.The Torre Picasso rises out of the commercial complex at Azca, on the Pablo Picasso square not far from Real Madrid’s Santiago Bernabeu stadium. Between 1988 and 2007, it was Spain’s tallest residential or office building. Only the giant television antenna-tower, the Torrespaña, was taller at 251m.
Metro: Nuevos Ministerios (Line 6/8/10) or Santiago Bernabeu (Line 10)
Open In Google Maps
Torre Picasso Madrid, Comunidad de Madrid, 28020, Spain
Give us feedback

Given the rather grandiose title of the Gate of Europe, the KIO Towers are not the highest in the city, but they are perhaps the most unmissable. Situated at the northern end of the Paseo de Castellana and slanting together at an angle of 15 degrees, these 115m high towers are credited with being the first inclined skyscrapers in the world. The existence of a major underground metro station (Plaza de Castilla) meant that traditional skyscrapers couldn’t be built directly alongside the main avenue. The solution was to build them further out, then lean them in! 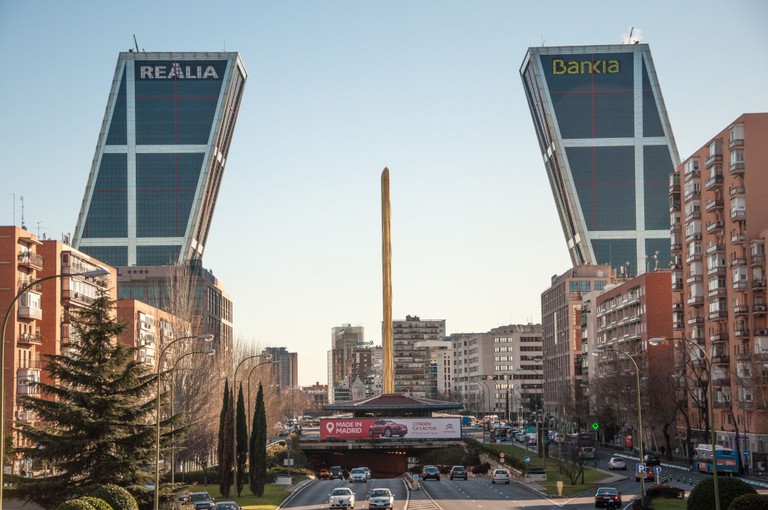 Designed by American architects Philip Johnson and John Burgee, the towers were first commissioned by the Kuwait Investment Office. They were later sold to Spanish banking giant, Bankia, whose headquarters are still there today. 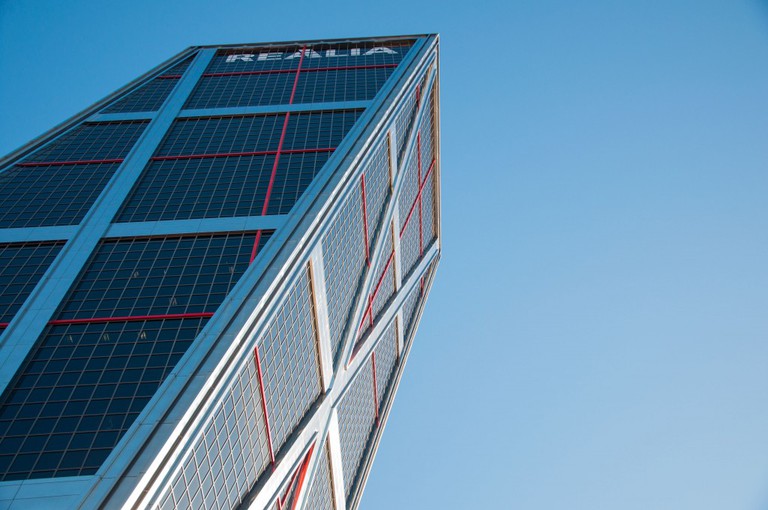 Perhaps motivated by the fact that Madrid used to be a walled city and was therefore comprised of many gates, Johnson and Burgee took the ‘gate’ concept and gave it a very postmodern twist. While the towers’s inclination was borne more out of practicality than design, the dark glass façade and the stainless steel skeleton implanted with thin red lines is very deliberately postmodern. Indeed, it makes the towers look like something out of a mid-1990s video game. 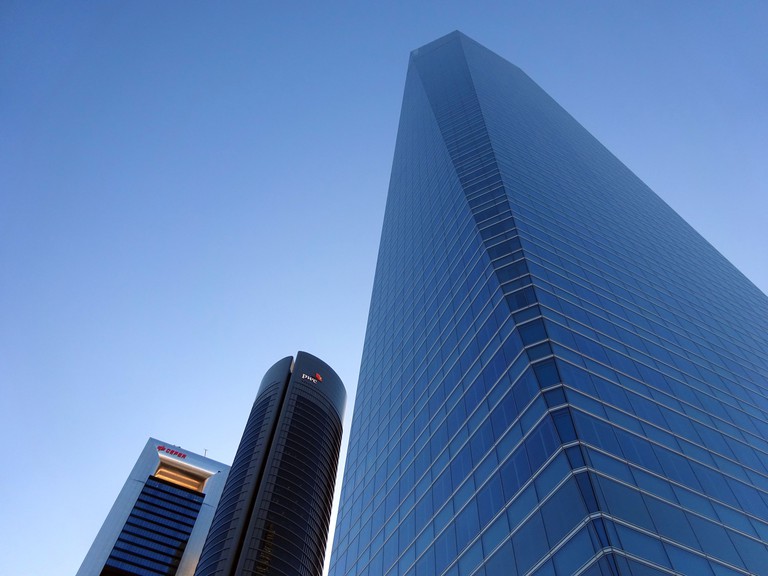 Torre de Cristal, Madrid | ©sergeantpluck/flickr
At the top of Madrid’s Paseo de la Castellan’ resides the Cuatro Torres Business Park. All four towers were completed in the 2000s, and all are modern enough in design to reflect the new millennium. However, the one tower that seems utterly futuristic is the ‘Glass Tower’. At 249m in height, it is the tallest building on mainland Spain, although this could be disputed. The neighboring Sir Norman Foster-designed Torre Caja Madrid is +/- 1m different, depending on the source.The glass tower was designed by Argentine-America architect Cesar Pelli (b.1926), a man who has made skyscrapers his life’s work. The Petronas Towers in Kuala Lumpur are Pelli’s design, as is One Canada Square in London, Britain’s second highest building. The Glass Tower was competed in 2009, and really is glass, from bottom to top. The design looks extremely simple – like the blade of a Samurai sword, its cuts into the sky, reflecting the Madrid sun. It is elegant yet monumental in its simplicity and presence. It can be seen as ancient as an Egyptian obelisk, or as futuristic as an extra-terrestrial spacecraft. Either way, it is the jewel in the Madrid skyline.
Metro: Chamartin or Begoña (Line 10)
Open In Google Maps
Planta 19, 259 C Paseo de la Castellana, Madrid, Comunidad de Madrid, 28046, Spain
+34913075804
Visit Website
Give us feedback
Give us feedback