Catalan Traditions You Have To Experience

As the wave of support for local identity and cultural values continues to envelop Catalonia, centuries old traditions are enjoying heightened levels of interest and participation. From fire runs to human pyramids, here are five Catalan traditions which you should make every effort to see on any visit to this enchanting region. 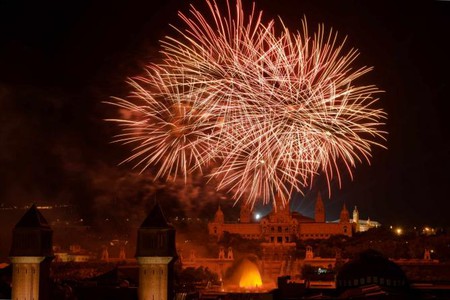 Arguably the most famous, and undoubtedly one of the most eye catching traditions found in Catalonia is the Castell. Granted protected status by UNESCO in 2010 as a display of ‘intangible cultural heritage‘ this elaborate practice sees teams of people build perilous, 10 story-high human skyscrapers as stunned crowds watch on, mesmerized by the soundtrack of the Toc de Castells. Most towns and municipalities in Catalonia have their own Castell team, which will compete in prearranged tournaments across the region. While it is a topic of debate as to whether these exploits represent mere spectacle or sport, it cannot be said that the participants are not willing to risk life and limb to express their unique national identity. Indeed, once the smallest Casteller has scrambled their way to the summit and regained their balance, it is customary to see them raise four fingers into the air – a gesture representing the vertical stripes of the Catalan flag. 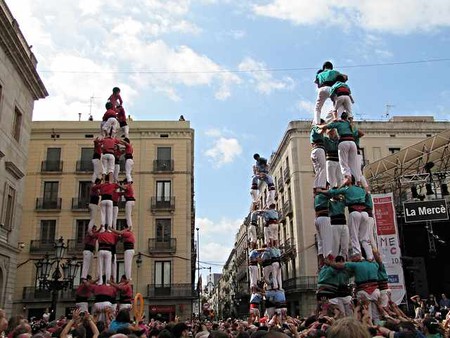 In some parts of the world, dressing as a devil and running up and down the street throwing fireworks would be, to say the least, inadvisable. In Catalonia it is an act that is celebrated as part of the region’s indelible cultural heritage. Correfocs are commonly found at celebrations such as La Mercé in Barcelona, though each municipality will have its own unique take on the phenomenon, rendering no two Correfoc experiences the same. It is important to understand that this is not a sinister act. The malignant looking center piece of the display is not an incarnation of evil; it is a lively, joyful being that dances to the sound of the accompanying drummer band. Attendees (Correfocaires) are advised to wear hats, gloves and long sleeves to protect themselves from burns and, providing that the necessary safety precautions are taken, a Correfoc offers a marvelous introduction to the vibrant, distinctive culture of the Catalan region. 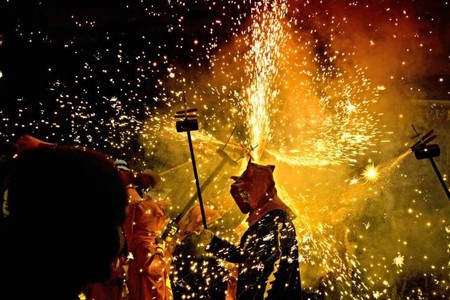 Another unmissable feature of any Catalan festivity is the Gigante – an actor or actress dressed in traditional regalia, sporting the vastly over-sized papier-mâché head of one the town or region’s key historical figures. However these characters need not necessarily be from a glamorous background – it is common to see Gigantes take the form of peasants, workers or ordinary townsfolk too, for they comprise as much a part of a people’s common heritage as the kings or queens that lorded over them in the past. As with Castells and Correfocs, traditional music and dancing play a crucial part in the role of the Gigantes. The arms of the colossal figurines often remain unsupported, while separate from the rest of the caste, meaning that they are free to swing and sway as the actors and actresses parade the crowded streets, performing the traditional Catalan dance routines. 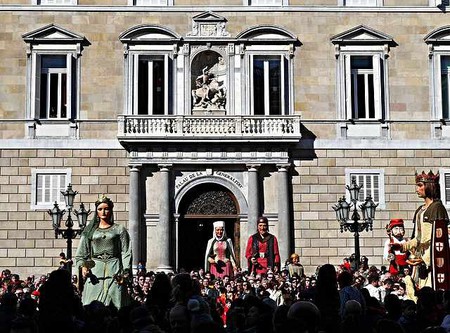 The folk dance of the Sardanas may be a lot less eye catching as a cultural act than that of the Correfoc, Castell and Gigante, but it is an inclusive, accommodating dance that has served to unite the Catalan people since the 19th century, and for this reason it is dearly treasured as an expression of national identity. Participants hold hands in a circle throughout the routine, raising and lowering them to the music of the traditional Catalan band (the cobla). It is the Sardana’s gentle nature that enables people of all ages, backgrounds and abilities to come together in celebration of their shared heritage. For special occasions and festivities bespoke routines are composed and it is a regular sight to see the circles swell to become so large that breakaway groups are formed and the dancers, young and old, experts and first-timers, split off into separate circles to dance together, side by side in town and city plazas across Catalonia. 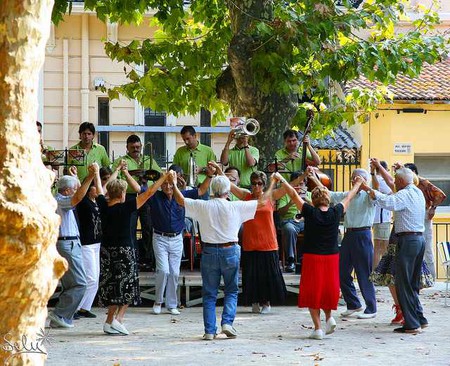 Another ubiquitous dance at Catalan festivals and celebrations is the ‘Ball de Bastons’, a ‘weapon dance’ that bears many similarities to folk dances found throughout Spain, Portugal, the UK and even Nepal. The custom is said to date back as far as the 12th century, and today it is being promoted ever more fervently within Catalonia by those keen to demonstrate the province’s unique cultural heritage. The Ball de Baston involves two rows of 8, 12, 16, 20 or 24 dancers, clad in white with brightly colored, ornamental sashes and ribbons, performing elaborate stick-clashing dances to the rhythms of the accompanying band. With the shouts of the performers, the clattering of their sticks and the jingle of the bells on their trousers, the Bastoners add to the soundtrack, ensuring that not only the dance provides entertainment, but also that the sound effects deliver a mesmerizing spectacle to the onlooker. As with most Catalan traditions there is an element of risk involved in the routine, as the dancers jump enthusiastically, slamming their sticks together without regard for the fingers or limbs of their partner, or indeed of themselves. 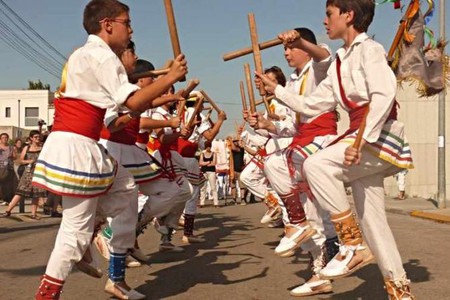