5 Beautiful Spots in Granada Even Locals Don't Know About 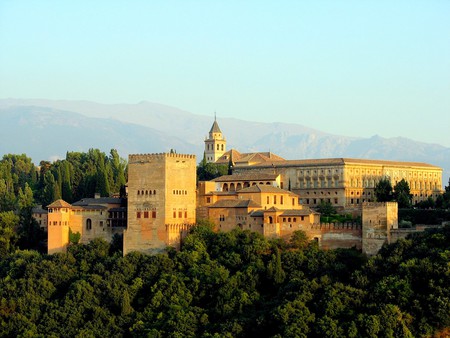 Granada is a city of secrets. Hidden among its narrow winding streets, off its squares and high up in the countryside above the gypsy neighbourhood of Sacromonte, there are spots the tour guides won’t take you to – probably because they don’t even know about them – but which richly reward the roaming traveller. Here are some of Granada’s best-kept secrets.

The Carrera del Darro, which starts on Plaza Nueva and follows the river down in the direction of Albaicin, is one of the most charming, romantic streets in Granada. It is too beautiful, in fact, merely to be walked down: better to find a place to take a drink and a bite to eat and enjoy it for a while. About halfway along, there are two old stone bridges crossing the river: these are surrounded by bars and cafes with lovely terraces, but they are tourist hotspots.

The second bridge leads up to a little square above a tapas bar, or up a little further to Calle Puente Espinosa. From these vantage points, off the tourist trail, simply sit on the walls and watch the world go by beneath, on the enchanting Carrera del Darro. 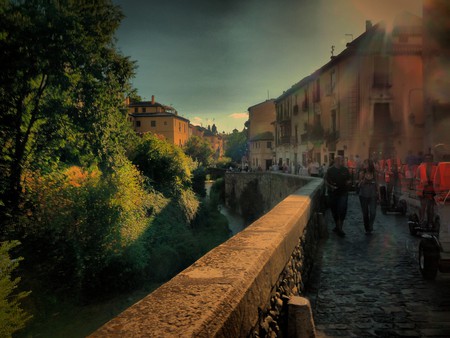 For some of the best views of Granada, the Alhambra and the surrounding landscape, nowhere can beat the hills above Sacromonte. These are accessed via the Caves Museum on the Camino de Sacromonte – the quarter’s ‘main’ road – at the top of which a hole has been cut in the wire fence, providing a route into the countryside. The little winding path that has been carved into the hillside by other adventurous visitors leads to a small plateau. From here, way above the city, all of Granada can be seen spilling out from the Darro valley, as well as the Alhambra sitting above it and the dramatic, mountainous landscape that stretches to the horizon, unspoilt, in every direction. 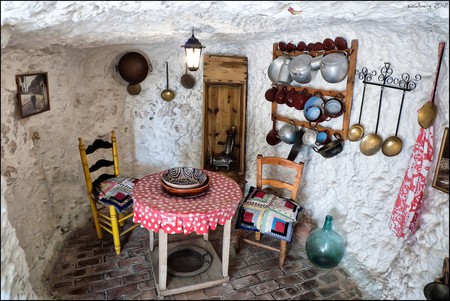 A typical cave in the Sacromonte area of Granada; dr_zoidberg, flickr

From this point above Sacromonte, it might seem as if the nearest bars or restaurants are far away. But following the dusty little path around to the right leads to one of the most delightful surprises in the city. Along a ridge on the hillside, a small community of people live in caves and shacks that are curiously decorated with artefacts crafted out of scrap metal and wood.

The Quirkiest Pizzeria in Granada

The inhabitants of this bucolic haven are warm and welcoming, and one of them, amazingly, runs an excellent pizzeria. This unnamed restaurant provides one of the most quirky dining experiences available in Andalucia, never mind just in Granada. 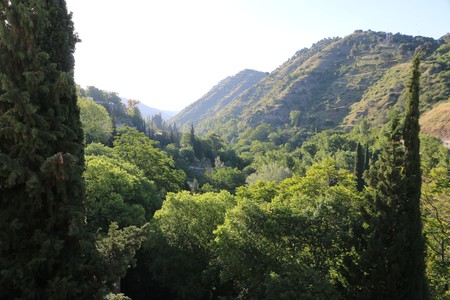 Climbing up through the lush Darro valley provides an off-piste route to the Alhambra; Oyvind Holmstad, flickr

An Alternative Route to the Alhambra

While the dense, steep cliffside beneath the Alhambra might look impossible to tackle, it does, in fact, provide an off-piste route up to the great fort. The path – for which a sturdy pair of trainers is required – is accessed by crossing the bridge to the right at the end of the Paseo de los Tristes and heading up Camino Fuente del Avellano. After a few minutes, a sharp right off this path zigzags up through the dense woodland and fauna. Following it brings you out in front of the Generalife, the Alhambra’s summer palace, facing the old Arabic quarter of Albaicin. The only other people likely to have found their way up here will also be visitors looking for something the tour guides can’t give them.