Playa de Monsul, Almería; horrapics/flickr
No matter what you like doing when travelling, you’ll find what you’re after in Almería. From its spectacular 10th-century Moorish fort to the breathtaking beaches of the Cabo de Gata Natural Park, there’s something here to suit every taste. Read on for the 20 must-visit attractions in Almería.

Almería’s star architectural attraction is its imposing 10th-century Moorish fortress, or Alcazaba. Perched on top of a sun-scorched hill overlooking the port, this was once one of the largest fortresses in Islamic Spain, second only in size to Granada’s Alhambra.

Cathedral, Church
The facade of Almería's 16th century cathedral |  © Steve Slater/Flickr
Almería’s stunning Gothic-Renaissance cathedral is unique in Europe for being built as a defensive fortress as well as a place for Christian worship. Constructed in the mid-16th century, it sits on the tranquil, palm tree-lined Plaza de Catedral, where the WWII classic Patton was filmed in 1970.
More Info
Open In Google Maps
8 Plaza de la Catedral, Almería, Andalucía, 4001, Spain
+34659121231
Visit website

Almería is the warmest city in Europe, so you’ll need to regularly cool off if visiting in spring or summer. Fortunately, the city boasts a superb beach: aptly named the Playa de Almeria, it’s about a fifteen minute walk from the city centre, and boasts 1,500 metres of sand and sea. 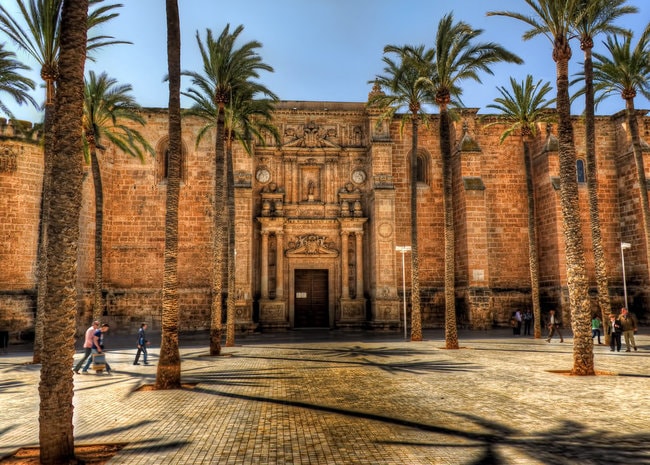 Almería’s status as the warmest city in Europe – its average annual temperature is 19 degrees celcius – is largely owed to its proximity to the Desierto de Tabernas. Located 30km (19 miles) to the north of the city, this rugged and beautiful land is Europe’s only desert.

Almería is famous throughout Spain for its beaches, the most stunning of which are located in the Cabo de Gata Natural Park, 37km (23 miles) east of the city. One of the most popular is the beautiful Playa el Playazo – a pristine stretch of sand on the park’s east coast. 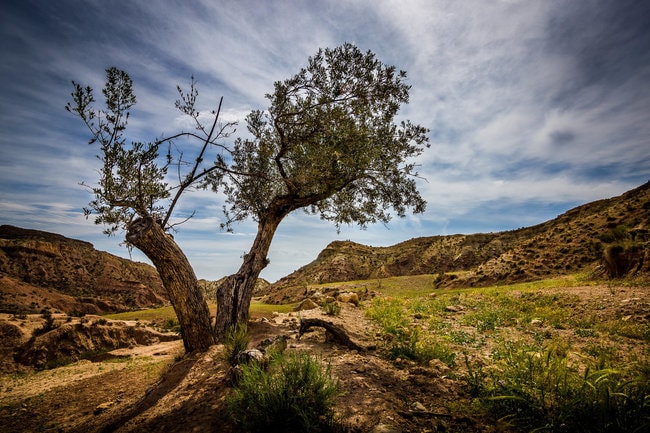 Throughout the 1960s and 1970s, Almería’s Tabernas desert was the setting for some classic Hollywood films, chief amongst them the Siergo Leone westerns starring Clint Eastwood. Today, you can visit three of the Wild West sets built for these classics: Mini Hollywood, Fort Bravo and Western Leone.

Park
A cowboy in Almería's Wild West | Emilio del Prado/flickr
Almería’s 460 square kilometre (177 square miles) Cabo de Gata-Nijar Natural Park is southern Spain’s biggest protected coastal area. It is home to 1,100 species of fauna, including many different types of birds, who use the park as a pitstop on their annual migrations. There is some wonderful trekking and biking to be enjoyed here.
More Info
Open In Google Maps
Níjar, Andalucía, 4118, Spain
Visit website

Hemmed in by volcanic rock formations, cacti and sand dunes, the Playa de los Genoveses is one of Almería’s most spectacular and unspoilt beaches. It takes its name from the Genoese army that camped here in 1147, before going on to assist King Alfonso VII in his successful capture of Almería from the Moors.

Picnics are necessary at the the Cabo de Gata’s Playa de los Muertos (Beach of the Dead), a stunning stretch of sand that has been left as nature intended it – i.e. without facilities or chiringuitos. This is one of Almería’s – and probably Andalusia’s – most popular beaches. You’ll soon see why. 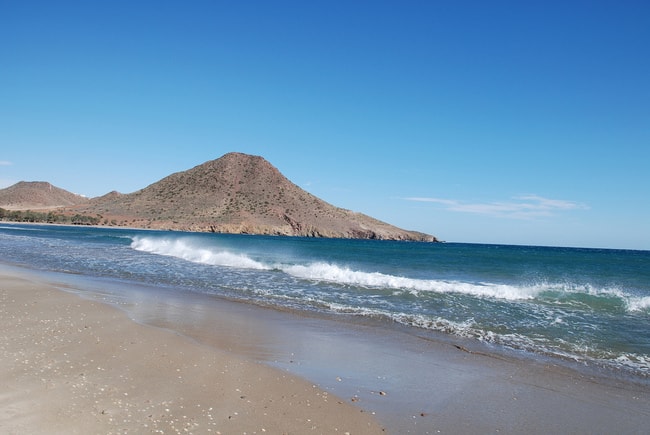 Bar, Tapas, Pub Grub
Migas scented with orange | © Jonathan Pincas/Flickr
This wonderfully old-school bar is located just next to the city’s bustling central market, and serves some of the best tapas in town. Join the old men at the bar, as they sip their red wines and graze on albondigas (meatballs) and boquerones(anchovies), or take one of the few tables if you’re after a proper meal.
More Info
Open In Google Maps
6 Calle Juan Leal, Almería, Andalucía, 4001, Spain
+34950239135
Visit website

Don’t leave Almería without visiting the old gypsy and flamenco neighbourhood of La Chanca. Exuding a scruffy charm, its cheerful, multi-coloured houses extend downhill in between the Alcazaba and the port. Other dwellings here take the form of caves carved into the hillside.

Museum
the Guitar Museum, Almería | Elenaguiadealmeria/WikiCommons
For some interactive and education fun, head to the Museo de la Guitarra, which offers an acoustic and electric guitar for visitors to try their skills on. The museum focuses on the 19th-century guitarist and guitar-maker Antonio de Torres Jurado, and displays a number of interesting models.
More Info
Open In Google Maps
S/N Ronda del Beato Diego Ventaja, Almería, Andalucía, 4002, Spain
+34950274358

Even by the dizzying standards of the Cabo de Gata Natural Park, Playa de Monsul is something special – which is presumably why Steven Spielberg chose to film parts of Indiana Jones and the Last Crusade here. Virginal sands, volcanic rock formations and clear blue water: what more could you want? 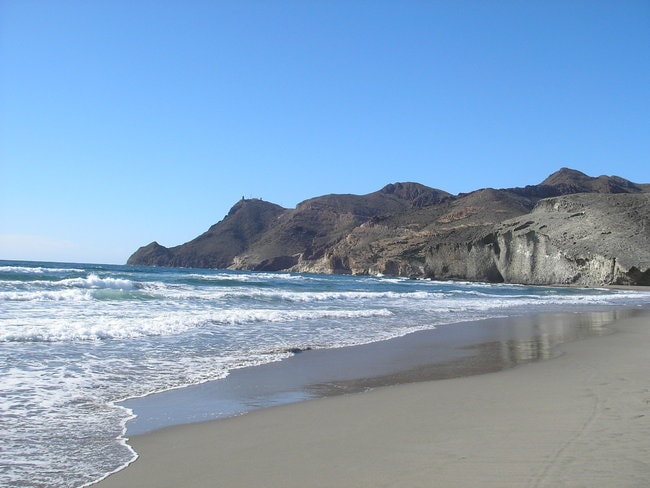 Take in Almería’s busy port by strolling along the Nicolás Salméron park, where you’ll end up if you walk down from the Alcazaba through La Chanca. From this leafy haven, you can watch the cruise ships as they depart for and arrive from Morocco and Algeria.

Park
The Fountain of the Fish in Parque de las Familias | © José Juan Sánchez / WikiCommons
The long stretch of gardens that offer fantastic views of Almería’s port take their name from Nicolás Salmerón, a local politician who in 1873 was president of Spain’s First Republic. At its centre is the visually-arresting Fuente de los Peces, or Fountain of the Fish.
More Info
Open In Google Maps
Carretera de Málaga, Almería, Andalucía, 4002, Spain
+34950210000

The oldest part of Almería can be found west of the elegant Paseo de Almeria and is known as the Almedina neighbourhood. It is well worth taking a couple of hours to get lost in its narrow cobbled streets, all of which eventually seem to end up in the palm-fringed Plaza de la Catedral.

Almería’s Plaza de Toros, or bullring, dates from the late 19th century and is well worth a visit if you’re in the northern part of the city. The Arabic arches of its upper level are a nod to the Moorish influence on this part of Spain, while a mix of styles characterises the rest of the building. 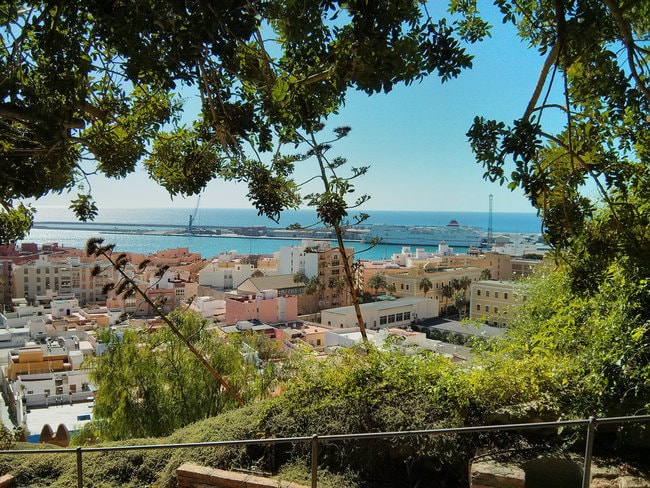