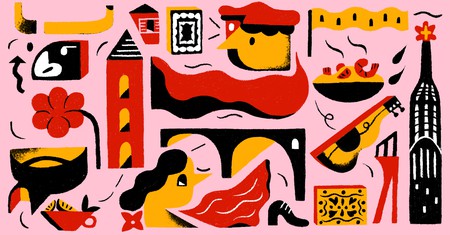 Spanish may be one of the most spoke languages in the world but that doesn’t mean it’s any easier to learn. What’s more, speaking Spanish in Spain isn’t the same as speaking it in Cuba or Peru, say. Here are 21 essential phrases you should master before visiting Spain if you want to master the basic of the language.

Of course you can always get away with a simple ‘hola’ but this slightly more formal version is welcome with older people and those you’re not familiar with.

This simple question is the most common way to follow up on saying hello to someone. Most people ask a matter of reflex and you’re not expected to go into any greater detail than ‘bien, gracias‘ or ‘good, thanks’.

While in South America this expression sounds as odd as the literal translation ‘enchanted’ would in English, in Spain it’s the most common way to say you’re pleased to meet someone.

A classic but not to be underestimated if you want to get on with locals. If you’re very grateful for something you can also say ‘muchas gracias‘ or ‘thanks a lot’.

Another easy way to impress your interlocutors with good manners.

The Spanish ‘no’ doesn’t sound quite like the English version with its big open ‘O’ sound. Imagine the first half of the word ‘nought’, before you reach the ‘t’.

You’ll want to be make sure you can ask this before you suddenly find yourself in a desperate situation.

This literally translates as ‘to the left hand’, similarly to the English ‘left hand side’.

Buses are one of the most common – and affordable – forms of transport in Spain, in cities and towns as well as in the countryside.

You can use these verbs to talk about going down the stairs ‘bajar las escaleras’ or to say you want to get off the bus ‘quiero bajar del bus’.

Use these words mainly to refer to to being inside or outside of a building (rather than there being chocolate inside your muffin).

Forget ‘una cerveza por favor‘, this will make you sound a lot more local. A caña can vary in size but should generally be around a half pint.

When you’re looking for somewhere to eat, let your waiter know how many people will be at the table.

Tap water is generally safe to drink in most places in Spain but locals often prefer to drink bottled water, especially in large cities like Barcelona and Madrid. You might also be asked if you want it fria (free-ya) or natural (na-too-ral), meaning room temperature or chilled.

Prices should be clearly marked at market stalls but they can be shown in price per gram or litre. If you’re unsure how much something will cost, just ask.

Ask a local for their advice or simply let the market stall holder know that you’re looking for quality with this phrase.

There are a lot of specialised shops in Spain, with huge supermarkets and department stalls being less common. Asking a local where the best place to buy something is usually the most reliable solution.

This phrase is a good way to invite someone out at the weekend while sounding spontaneous and casual. As if it had only just occurred to you that it might be nice to meet up.

Football is the national sport in Spain. You can be sure that if FC Barcelona or Real Madrid are playing a game, there will be a bar somewhere showing it live.