Things You Can Only Buy in Spain 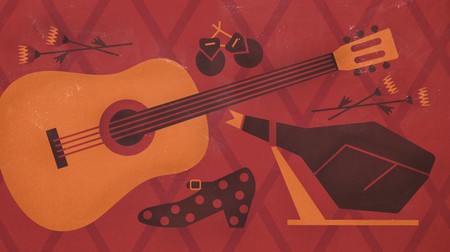 Spain is a place where every sense is stimulated, and a souvenir can bring back the feeling, taste or even smell of your trip. But there’s nothing worse than letting go of precious spending money only to find your “authentic” product has been mass-produced elsewhere. From upmarket flamenco guitars to bottled Ibiza air, read our rundown of things to buy in Spain that you won’t find anywhere else. 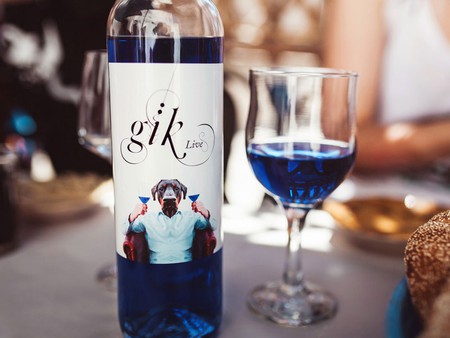 For something truly unique, buy a bottle of Gik Live blue wine | © Gïk

Spanish company Gik Live launched the world’s first blue wine in late 2016. It’s one of the more unusual products from Spain, with its creators describing it as a “blasphemous drink”, and it certainly raised a few eyebrows among members of the traditional winemaking community. It’s made by combining red and white grapes with a natural, plant-based blue dye and non-calorific sweeteners. You can pick it up in wine shops across Spain, or try a glass in selected restaurants. 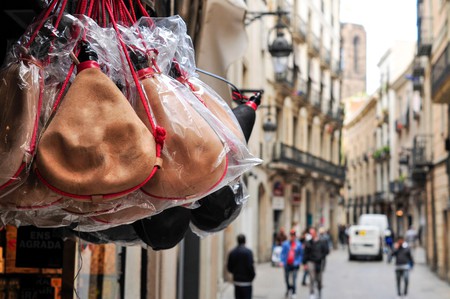 A bota, or wineskin, is a traditional Spanish drinking vessel, usually used for wine but it can hold any liquid. Drinking from it usually involves angling the wineskin so the liquid shoots straight into your mouth without ever having to touch the bota. This way, people can easily share wine without putting their mouths on the same part of the wineskin. The bota is traditionally made from leather and lined with a goat’s bladder or tree sap to stop it leaking, although modern bags are usually lined with plastic and come with a plastic nozzle.

Follow in the footsteps of Bob Dylan, Cat Stevens and Leonard Cohen, as well as flamenco legends like Paco de Lucía, by purchasing a guitar from Felipe Conde – the Conde family are master guitar makers who have been handcrafting their instruments for more than 100 years. The guitars are made from woods of different colours, selected for their look and ability to produce a good sound quality. They’re not cheap – starting at €2,400 (£2,066) and reaching €15,000 (£12,914) – but for a lifetime investment and a piece of rock history, they’re well worth the price tag. 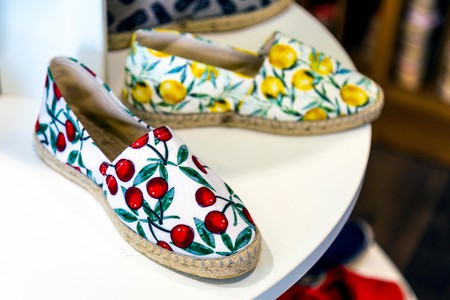 While the espadrille is popular worldwide, it was once seen as the shoe for the poor and working-class | © Nathaniel Noir / Alamy Stock Photo

You might be able to pick up versions of this popular summer shoe abroad, but you can only purchase the genuine article in Spain. Casa Hernanz in Madrid has been making espadrilles, a rope-soled shoe, since 1840 and is one of the longest-running espadrille manufacturers in the country. Originally the shoe of the poor and working-class, the espadrille came to worldwide attention when Lauren Bacall sported a pair in the 1948 film Key Largo. They have been a summer fashion staple ever since.

Sherry from the place that invented it 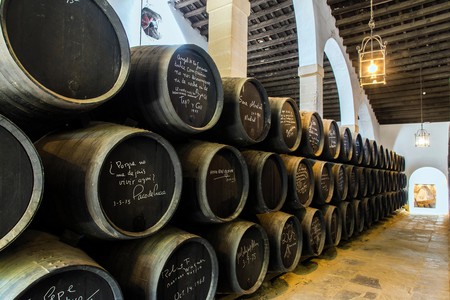 Jerez is the Spanish word for sherry, and this southern town is the undisputed sherry capital of the world. When considering what to buy in Spain, you want something with provenance, and in Jerez, you can learn about the fortified wine, take a tour and, more importantly, go to a tasting. Sherry became popular in the United Kingdom in the 1500s when Francis Drake destroyed the Spanish fleet in Cádiz in 1587 and brought back 2,900 barrels. Several of Jerez’s wineries were founded by British families. 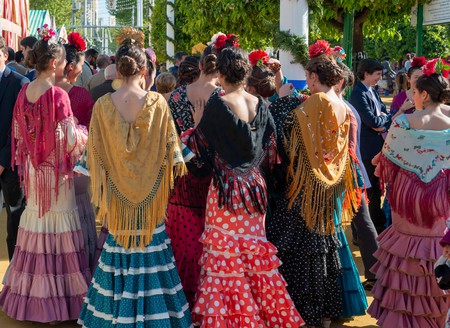 Spain is home to the dramatic and passionate music and dance style of flamenco, which is thought to have emerged in Baja Andalucía in the late 18th century. There are theories that the Indian classical kathak dance influenced the style, as well as the dances of Afro-Andalusians. You can find flamenco dresses, shawls or shoes across the country, and there are many shops stocking costumes and accessories in Madrid and Seville. If you want something that takes up minimal space in your suitcase, pick up some castanets – concave wood shells that flamenco dancers clack together as a percussion instrument.

If you’re really stuck for what to buy in Spain and want to take a piece of Ibiza, a popular party island, home with you after your holiday, why not buy a can of Aire de Ibiza, a bottled sample of the island’s breeze? A couple of friends on the island began selling the product from an ice-cream parlour in summer 2016 – cheekily described as being “pure and virgin” air, having no additives and being gluten-free – and the product has been a hit with tourists ever since. 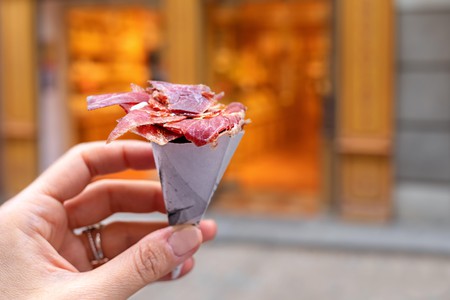 Spaniards adore jamón, a cured ham that is a staple of any tapas menu and one of the tastiest products of Spain. Step into any bar and, chances are, there will be a ham leg that waiters slice thin strips off. There might even be several ham legs hanging from the ceiling. Jamón ibérico is the country’s highest quality ham, made from black Iberian pigs that subsist mainly on a diet of acorns. You can easily pick up packets of quality jamón in Spain, but why not go the whole hog (pun intended) and take home an entire leg of ham? Your family will thank you for it.

Orujo (nicknamed “firewater” by locals), a brandy from northern Spain made from the solid remains of the grapes used in winemaking, has at least 50 percent alcohol content. As the nickname suggests, it’s one of the most hard-hitting products you can buy. It’s particularly popular in Cantabria, Asturias and Galicia, where local families have been making orujo for generations. The town of Potes holds a contest every November, where competitors distil the alcohol in public and hold tastings to find the best maker. 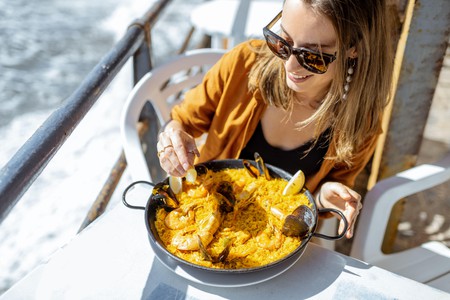 If you buy a paella pan, you can relive part of your Spanish holiday at home | © RossHelen editorial / Alamy Stock Photo

Buy one of the longer-lasting Spain souvenirs – an authentic Spanish paella pan (and some saffron, a key ingredient of paella) – and you can perfect the classic dish at home. There’s a booming trade in paella pans in Valencia, the home of paella, but you can pretty much buy them anywhere throughout the country at markets and cookware shops.

You’re bound to see this nougat-like sweet while you’re out shopping in Spain. Spanish people especially buy it in the run-up to Christmas; it’s a popular gift and souvenir. It’s made with almonds, honey, sugar and egg whites and is served in a rectangular slab. The sweet might be derived either from a dish made in parts of Islamic Spain or from ancient Greek or Roman recipes. Casa Mira, founded in 1842 in Madrid, was the capital’s first turrón shop and is still extremely popular with locals today. 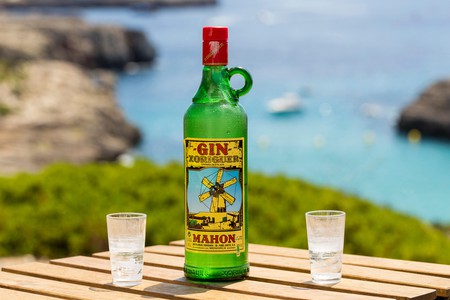 Menorca first started making gin when Great Britain occupied this Balearic island in the 18th century, and British soldiers wanted to enjoy the familiar taste of their favourite tipple. Spain took back control in 1802, but Menorca continued to make gin, with commercial brands such as Xoriguer taking hold in the 20th century. In 1997, the drink received the official denomination Gin of Menorca, so it cannot be made anywhere else in the world.

The Spanish classic cold tomato soup is a staple of many restaurants, but you might be surprised to see it on the menu at this popular fast-food chain. So, when you’re out shopping, make sure you sample some gazpacho alongside your Big Mac. You can even enjoy a beer – the Spanish McDonald’s sell cerveza, unlike those in many other countries. 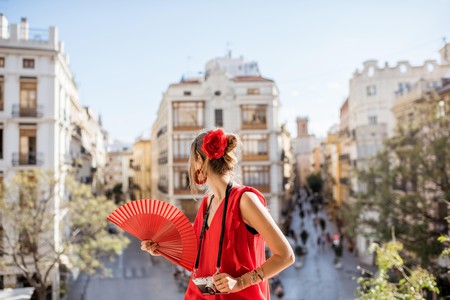 They might seem like a bit of a stereotype, but a handmade Spanish fan, or abanico, is one of the most beautiful gifts to take home and it can even be practical when it’s hot. It’s common to see women of all ages carrying a fan in Spain’s big cities, as it’s one of the cheapest, quickest and easiest ways to cool down. 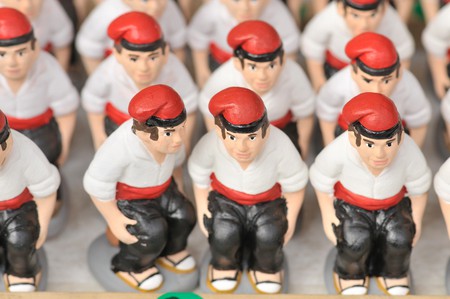 A Catalan Christmas tradition like no other, the caganer, or “Christmas pooper”, is a long-standing staple of every nativity scene in the northeastern region of Catalonia. The figure, who has his trousers down and is defecating, is usually a little boy dressed in traditional clothes. However, today, there is a booming industry in making poopers that look like famous people. You can pick up one in the form of Donald Trump, the Pope, Cristiano Ronaldo or Lady Gaga. The figure symbolises good fortune for the year ahead.