EUROPE
/
SPAIN
/
MINORCA
/
Things to Do 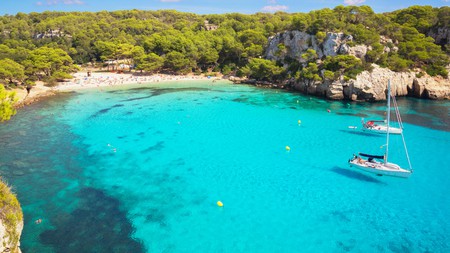 Away from the limelight of the other Balearic Islands, Menorca has been gaining popularity in recent years as a less-developed alternative to Ibiza and Mallorca. As a direct result of General Franco denying it funds during the civil war, Menorca has relatively little mass tourism development, unlike much of the Balearics – around one million tourists visit Menorca each year, compared to Mallorca’s 14 million foreign visitors in 2019. This, together with Unesco declaring the island a biosphere reserve in 1993, has resulted in most of the island remaining a genuine oasis of unspoilt beauty, with rural villages dotted across rolling hills and white-sand beaches. There are countless reasons that make Menorca a destination to be visited at least once in your lifetime, but here are our favourites.

The beaches are some of the best in the world 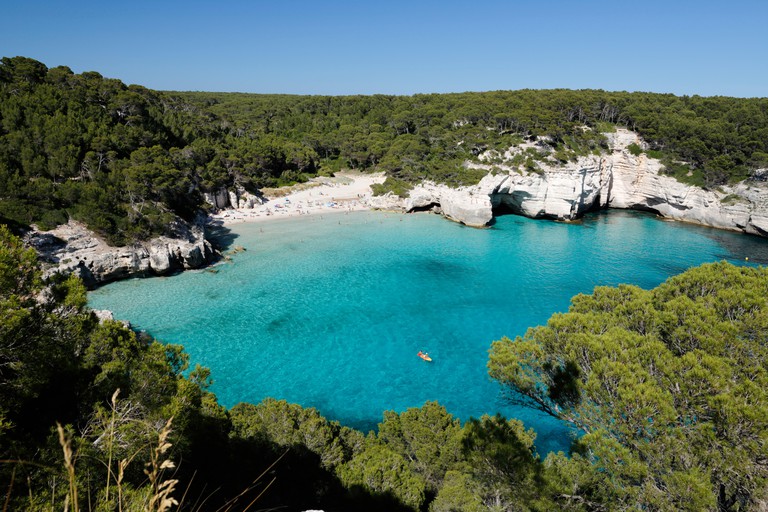 Did you know that Menorca has more beachy coastline than the whole of Mallorca and Ibiza combined? With nearly 200 small coves – or calas – to explore, pristine white sand and turquoise waters, the island will satisfy any beach lover seeking their little slice of paradise. The majority of beaches are pristine or very lightly developed, meaning you’re always guaranteed to find some peace and quiet somewhere, even in high season. Try Cala Mitjaneta – just along from popular Cala Mitjana – for a tiny, white curve of pine-framed heaven, or tackle the 30-minute hike to Cala del Pilar for wild, ochre sands. And as the most easterly island of the Balearics, Menorca boasts the best sunrises with its uninterrupted views across the Med.

You can hike (or ride) around the whole island 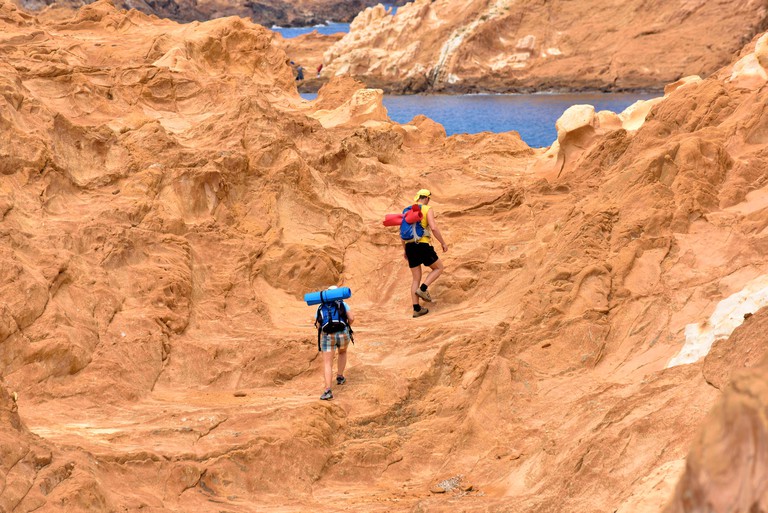 There is a wonderful bridleway that circles the entire circumference of Menorca called the Cami de Cavalls. The whole island can therefore be explored by foot, horseback or bicycle, though you may want to tackle the 185mi (298km) in small chunks or you could be travelling for at least a week. For horse lovers, both Ciutadella and Mahon have their own hippodromes, where you can enjoy the excitement of a horserace. Alternatively, take the reigns yourself along one of Menorca’s many bridleways and tracks which cover the island. Horses are also celebrated island-wide at many events throughout the year, and the dancing stallions at the festivals of Saint Jaume and Saint Lluis are not to be missed.

It has fascinating archaeology 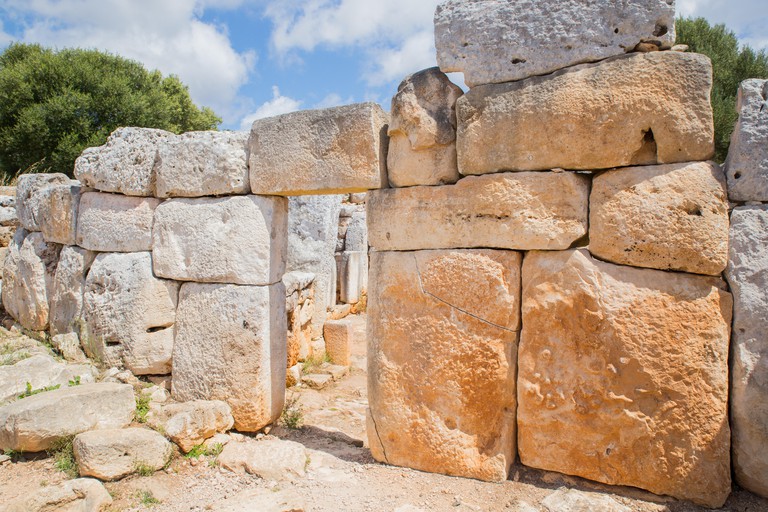 © Chris Stevenson / Alamy Stock Photo
Travelling through the island you will often spot piles of stones and primitive structures that date back thousands of years. The famous Torre d’en Galmes in Alaior is perhaps one of the greatest examples of Talayotic architecture, featuring circular or square shaped stone buildings. Here, you can still examine the extraordinary traces of underground houses and storage areas. Alternatively, head to Torre Trencada, to see an almost-perfect stone circle, and taulas (tables) which consist of a huge slab of rock mounted on two equally large vertical planks. 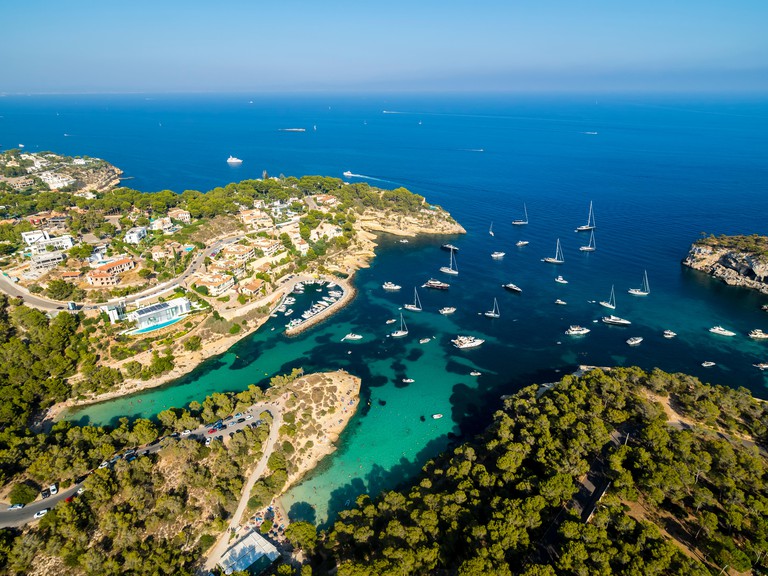 Thanks to its Unesco Biosphere Reserve designation, Menorca is committed to the protection of its natural landscape. Species such as secretive pine marten, turtles and peregrine falcons in the ravines of the Barrancs thrive in five beautiful parks and numerous reserves across the island. Due its relatively diminutive size, hiring a car and exploring the island is easy. The towns are a photographer’s dream – all quaint cobbled streets and whitewashed facades – while the lush landscape in between is brimming with wild flowers, pine forests and fruit orchards. Catch the stunning views of the whole island from El Toro, a 350m (1,200ft) hill in the middle of the island with unrivalled panoramic vistas.

The beautiful city of Ciutadella 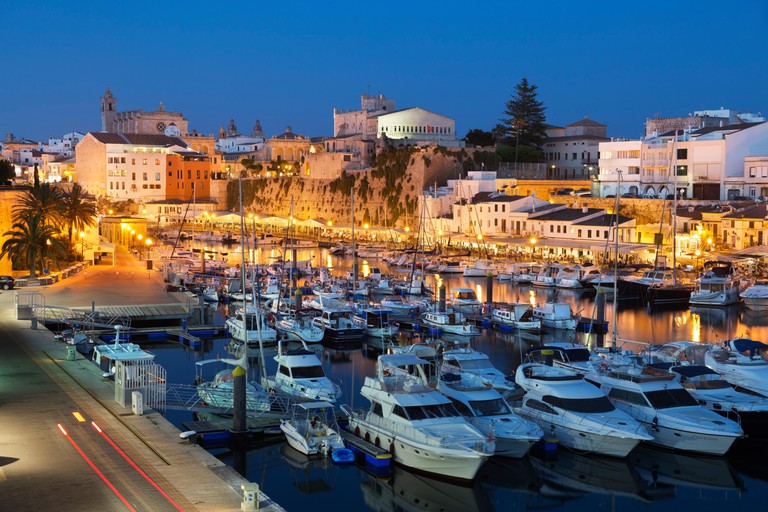 © Stuart Black / robertharding / Alamy Stock Photo
Located on the far-eastern end of the island and Menorca’s original capital, Ciutadella features a particularly gorgeous Old Town with a wonderful mix of historical buildings, fantastic shops and buzzy cafes. Visit the gothic Santa Maria Cathedral, built on the foundations of a 13th-century mosque, to see stunning architecture. Head just out of town to Pedreres de s’Hostal, magnificent abandoned limestone quarries, to catch the annual Pedra Viva festival – which pulls together all kinds of arts ranging from music concerts, poetry recitals, dance and theatre. Originally intended to be a short, one-off project for sharing the arts and culture with the public, its huge success has kept the festivities alive year after year.

You'll get an endless choice of watersports 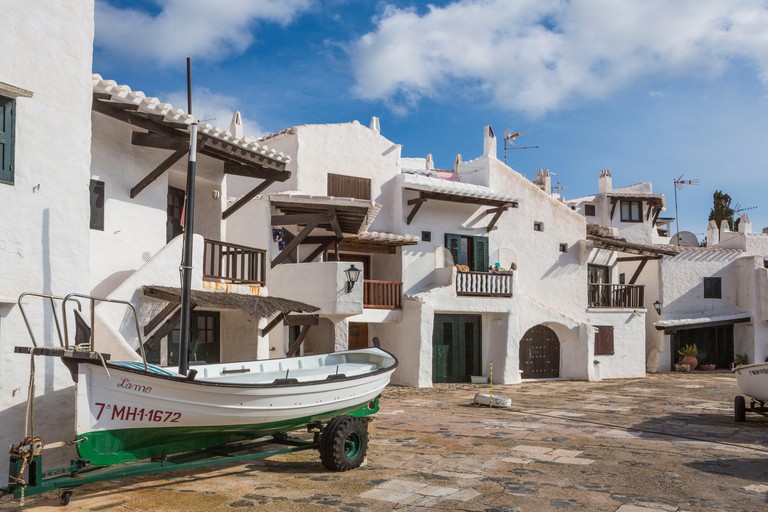 © Jose Fuste Raga / mauritius images GmbH / Alamy Stock Photo
Menorca is rapidly developing as a centre for watersports. With strong prevailing winds, Fornells is one of the best resorts to enjoy windsurfing, sailing and kite surfing. Head to Binibeca to search for underwater shipwrecks while scuba diving. With its spectacular range of coves to choose from there will always be a quiet spot perfect for snorkelling or paddle-boarding for those seeking a calmer activity.

The nightlife is low-key and lovely 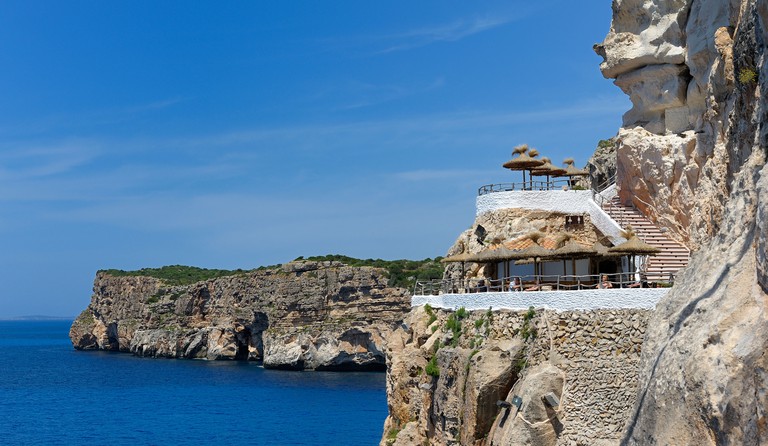 While nightlife across the island is generally subdued, there’s still plenty for those who don’t want to turn in early. You can refine your salsa moves at Tse Tse Club in Mahon, unwind to live music at the Akelarre Jazz Club and for weekend fun, dance at the H2O in the pretty harbour. Probably Menorca’s most famous bar-nightclub is Cova d’en Xoroi, set into cliffside caves and renowned for its incredible sunset terraces – things certainly liven up after nightfall with live music and DJs.

You can sip on wine and gin aplenty 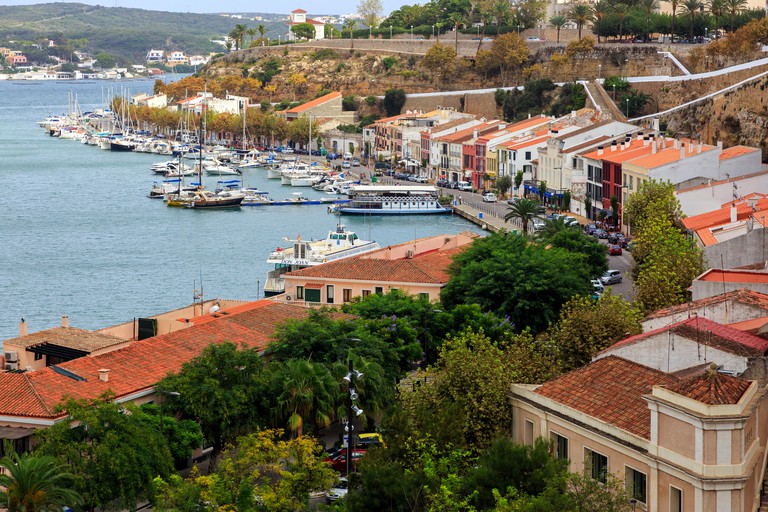 © Findlay / Alamy Stock Photo
With its lush climate and fertile ground, Menorca is dotted with vineyards that produce some great local wines. Visitors often book a whole holiday around tours of the many wine estates and festivals dedicated to the grape throughout the year. Be prepared to catch a bottle during the Festes de Gràcia (Festival of Gracia) in Mahon, when they’re thrown into the crowd from the town hall. Alternatively, for those with a taste for the stronger stuff, the Xoriguer Gin Distillery is a fantastic way to spend an afternoon. The local drink of choice? Just ask for a pomada –a simple and refreshing mix of gin and cloudy lemonade –or vermouth at Anatea in Mahon’s old town.

To shop for famous Menorcan sandals 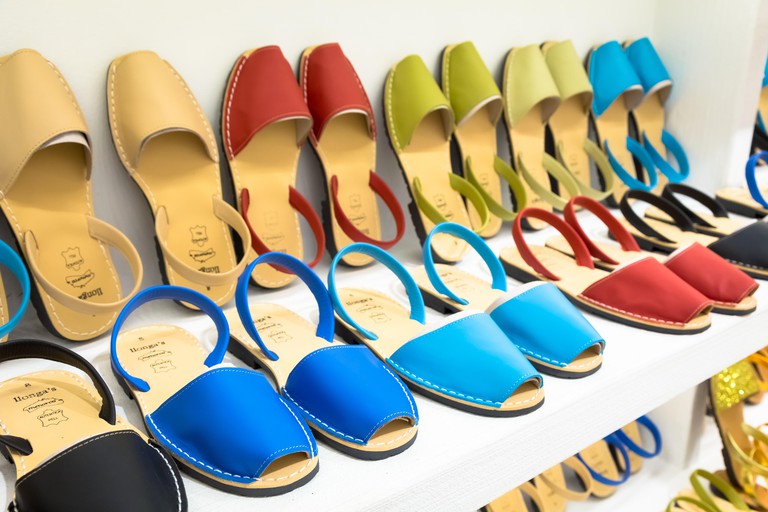 Often seen on the feet of Spanish royalty and replicated on the catwalks of Prada, the Avarca sandal is one of Menorca’s most renowned products. The humble origins began as a peasant’s necessity – recycled rubber tyres and dyed cowhide were used to create a footwear capable of treading the island’s rugged landscape. Nowadays, no visit to Menorca is complete without a few pairs in the suitcase to take home. Visit Ca’n Doblas Artesania stores for the best versions of these sandals, in anything from suede to embroidered leather or faux crocodile skin, as well as the more traditional types. 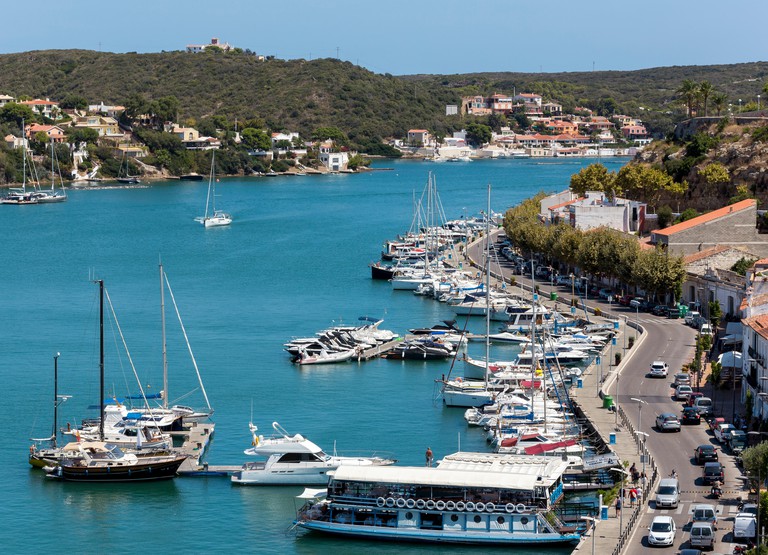 Surrounded by the waters of the Mediterranean, the island’s seafood is naturally excellent. Look out for the local lobster stew caldereta de llagosta, which is Menorca’s most celebrated traditional dish. Sample delicious spongy cheeses at cheese factories – mostly in the centre of the island – or try the popular local tapas of sobrassada, cured pork sausage seasoned with paprika and served on toast. Crunch on whole deep-fried prawns – including the head, tail and legs – at Cap Roig just above Cala Mesquida, and slurp on cool hake gazpacho at Passio Mediterrania, in Mahon’s yacht-filled port.