15 Delicious Dishes Worth a Trip to Valencia For 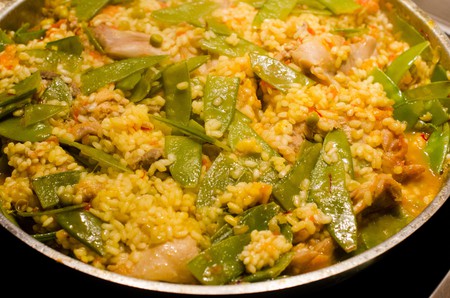 Not only does the Spanish region of Valencia have its own language, it also has its own cuisine. You’ll find it’s largely based on the local staple short-grain rice, prepared every way imaginable. There’s also plenty of fresh seafood, fruit and vegetables, as Valencian chefs can take their pick of the best produce straight from the surrounding countryside and the Mediterranean sea. Before you head out to the city’s amazing food markets or restaurants, check out our guide to some of the local dishes you need to try on your trip.

The most famous Spanish dish of all hails from Valencia. The traditional version of paella valenciana is far from the fluffy yellow rice dish found elsewhere. Here, it’s a shallow golden-brown layer of rice studded with chicken, rabbit, snails and vegetables, and just the right amount of socarrat (the slightly toasted rice at the bottom of the pan). There are plenty of great paella restaurants around town where you can try authentic paella for yourself. 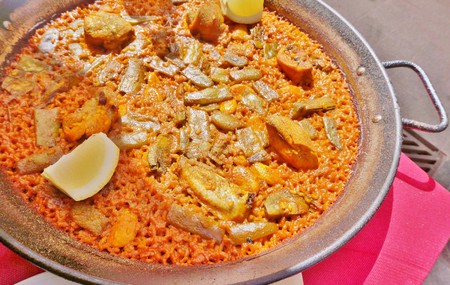 This popular rice dish has a dramatic appearance thanks to its deep black colouring, which comes from cuttlefish or squid ink. It can contain various kinds of seafood, including of course cuttlefish or squid, and is also flavoured with garlic, paprika and fish stock. It’s also cooked in the paella pan, but locals will tell you the cooking method is different from traditional paella.

Not rice cooked in a paella pan this time, but fine, hollow noodles. Nearly as loved as paella, this dish is made with a variety of local seafood which can include rockfish, monkfish, cuttlefish, squid, shrimp, or crayfish, and plenty of lemon. The name comes from the Valencian and Catalan word fideuada, meaning ‘a lot of noodles’.

Meaning rice in the oven, this warming dish containing sausage, chickpeas, potatoes and occasional other ingredients is Valencian comfort food. It’s most often eaten at home, but if you spot it on a restaurant menu (also known as arroz al horno in Spanish) make sure to give it a try. 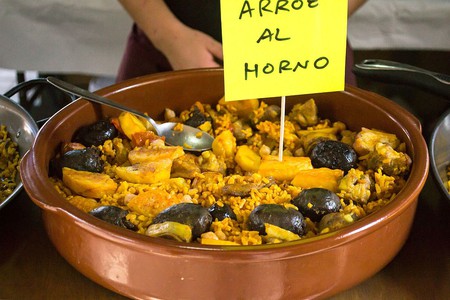 This humble seafood rice dish, typical of Valencian coastal towns, packs a lot of flavour. It has its orgins with the fisherman of Alicante, who would sell the best of their catch and keep the leftovers, which they used to make fish stock to cook the rice in. It’s usually served with alioli, a strong garlic mayonnaise.

Another dish which has its origins in the fishing villages of Valencia, once made to feed the crew of fishing boats, this is a pungent garlicky stew containing potato, fish and eel. Despite its humble origins you can now find versions in the city’s fanciest restaurants, and it’s often described the Valencian answer to Bouillabaisse.

No Valencian evening meal at home is complete without this simple stew, served as a side dish. Sometimes known as hervido, it usually contains some combination of potato, carrot, onion and green beans accompanied by oil and vinegar.

A signature dish of the Albufera area, to the south of Valencia, eel and potato are simmered in a fragrant sauce of garlic, paprika, chilli peppers and ground almond. It might sound unusual, but we recommend giving it a try.

Though it’s originally from the Balearic islands, you’ll see sobrasada all over Valencia, found in everything from wedges of tortilla to bocadillos (filled baguette sandwiches). It’s a kind of paprika-spiked cured sausage with a soft, paté-like texture, ideal for spreading on toast. 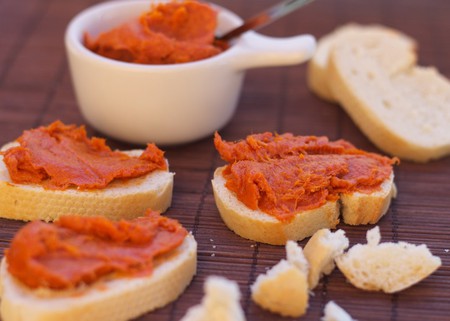 This hard-to-pronounce local delicacy consists of small strips of salted cod (a Valencian favourite) with sweet red peppers and garlic, all doused in olive oil to create a strong-tasting dish usually eaten with crusty bread. You’ll find it at every tapas bar in the city.

For a very Valencian snack or dessert, grab a wedge of roasted pumpkin. Thick, squidgy slices are sold individually wrapped, and make a perfect picnic item. A more sophisticated version can be found on restaurant menus, served warm with whipped cream and a drizzle of caramel sauce.

If you like donuts, then you must try bunuelos. These fat, fried pastries are made with a sweet pumpkin batter and coated liberally in sugar. Along with churros and chocolate, they’re very popular and typical springtime treats usually eaten around the time of Las Fallas, the city’s main festival in March. 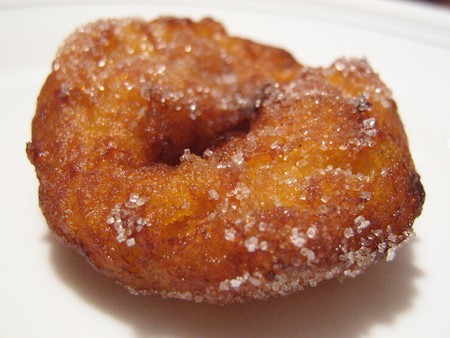 Turron is one of the most popular sweet treats in this part of Spain, and you can find it with nuts, honey, chocolate and all kinds of other varieties, in soft or brittle versions, at markets and specialty shops all over Valencia.

The must-try pastry in Valencia, these long doughy fingers have a shape and a semi-sweet flavor that’s perfect for dipping in orxata (horchata), the much-loved Valencian cold drink made from tiger nut. Try this combination at one of the city’s many horchaterias.

Found in sweet or savoury varieties, this flatbread is found at bakeries and cafes everywhere in the Valencia region topped with everything from bacon to ratatouille. The sweet version, sometimes called coca de llanda, has a spongecake-like texture and is usually made with pumpkin, lemon or apple. You’ll definitely need to try more than one.