La Sagrada Familia is an absolutely breathtaking church located in Barcelona, Spain. The architect behind this gem, which is still not completed, is none other than Antoni Gaudí. Gaudí has world-renowned masterpieces spread throughout Barcelona, although none have quite an interesting background like La Sagrada Familia. Here are some incredible facts you need to know about this sacred space before visiting.

1. It’s Been Under Construction for Over a Century

Construction for the Sagrada Familia project began in 1882. When Gaudí died in 1926, only a quarter of the basilica was completed. Although Gaudí made sure to spend his last few years dedicated to the project, it was clear that it wouldn’t be finished during his lifetime. This year, it’s believed to have entered its final stage of construction, with 2026 as its estimated completion date.

2. The Structure Has Taken Longer To Build Than You Think

While 150 years is certainly a long time to build something, think about this: when La Sagrada Familia is completed, it will have taken longer to build than the Egyptian Pyramids, and only 50 years less than the Great Wall of China. That’s pretty amazing.

3. There Used to be a School Here

During the early days of La Sagrada Familia’s construction, Gaudí built a school on the site called the Sagrada Familia Schools building. The school was built for the children of construction workers to attend while their fathers spent their days and nights building one of the most magnificent structures in all of Europe. Designed in 1909, the school is now the site of an exhibition on the Sagrada Familia. Gaudí seems to have been a very thoughtful man.

4. Without Computers, We Could Have Been Waiting a Lot Longer

Back when construction began in the late 1800s, there were no computers or digital animation to rely on for the project. In the past, builders had to rely on paper sketches to correctly put together this massive structure. However, thanks to the invention of computers in the mid-20th century, the progress sped up rapidly.

Though a long ways from being completed, La Sagrada Familia was designated as a UNESCO World Heritage Site in 1984. It received the designation mostly because of its unique architecture and Gaudí’s ability to create something so innovative and artistic. This is not a surprise, however; La Sagrada Familia is one of seven buildings by Gaudí that fall under this category. 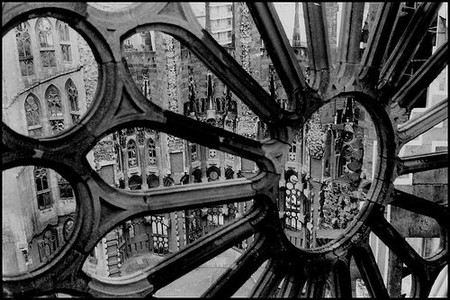 6. It’s No Longer a Cathedral

When construction first began on La Sagrada Familia, it was understood to be a simple Roman Catholic church. Later on, it was designated as a cathedral, and then in 2010, Pope Benedict XVI declared it a basilica. For those who might not be familiar with the distinction, a cathedral is the seat of a bishop, so it turned out to be a great honor for the building.

7. Each of the 18 Towers is Significant

When La Sagrada Familia is completed, it will have 18 towers. 12 of the towers will represent the apostles, four of them will represent the evangelists, one will be designated for the Virgin Mary, and of course the last one, the highest one in the middle, will represent Jesus Christ. However, right now there are only eight towers.

8. Gaudí is Buried There

La Sagrada Familia is home to the tomb of Antoni Gaudí, who was unfortunately killed a few days after being hit by a tram. Located in the underground level of the building, visitors can come see the tomb for themselves. The tomb is surrounded by four chapels, each dedicated to a different figure. Gaudí’s tomb is held in the chapel dedicated to the El Carmen Virgin.

9. People Have Tried to Take It Down

In 1936, in the midst of the Spanish Civil War, a group of anarchists broke into the Sagrada Familia and set fire to the crypt. Though many important materials involving the construction were lost, a few were saved. During this period in history, the entire construction of the building was extremely slow, due to obvious reasons.

There are three facades at La Sagrada Familia, and the Nativity Facade was completed by Gaudí himself. The Passion Facade and the Glory Facade were built much later, and when the sculptures of Christ on the crucifix were added to the Passion Facade by Josep Maria Subirachs, many people argued that they were too abstract and took away from Gaudí’s style and vision as an artist and architect. 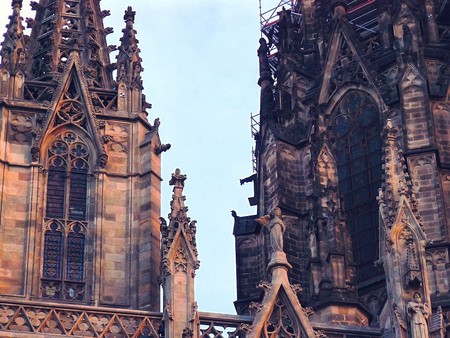 Although most cathedrals or religious establishments have straight structures, Gaudí felt that things should be built to resemble nature. Gaudí would hang a weighted string from the ceiling to see how natural arches would form, and designed La Sagrada Familia’s interior based on what he saw.

12. Its Height is Remarkable

When La Sagrada Familia is completed, it will be tallest religious building in all of Europe. The central tower in the middle will reach 170 meters tall. Despite having a powerful height, Gaudí believed that nothing man-made should ever be higher than God’s work. It is no coincidence that the ultimate height will be one meter less than Montjuïc, the mountain in Barcelona, which is also the city’s highest point.

13. There Are Elevators Inside

Okay, so the fact that there are elevators inside isn’t that amazing, but when you look at how thin the towers are, you might wonder how that works. Even though they aren’t magic glass elevators that Willy Wonka created, they do allow visitors to see the lowest and highest parts of the structure. Of course, once you get out of the elevators, you’ll have to navigate through skinny walkways and stairs to get to the towers, where you can see gorgeous views of the city.

There’s tons of symbolism in each part of Gaudí’s structure. Aside from the religious symbols, there are two you should look out for. First, the interior pillars actually resemble trees, and when you look up at them their shapes constantly change, as real trees appear to do. There is also a tortoise and turtle holding up these pillars, representing both the earth and the sea.

15. Your Trip Keeps It Going

If you’re thinking about coming to visit La Sagrada Familia anytime soon, don’t think twice. The three million visitors every year help support the project, which costs around 25 million euros annually. Thanks to your contributions when you visit (as well as those from donors), you can say that you’ve taken part in the construction of a masterpiece!

The next time you’re in Europe, make sure you come visit. Use these facts and everyone will think you’re a tour guide!