One of the city’s most remarkable landmarks, the ancient cathedral is located in the Gothic Quarter, the historic centre of Barcelona. A functioning Roman Catholic cathedral which still acts as a place of worship and celebration, the cathedral is also a major attraction and a symbol of Barcelona’s status as an important Spanish city.

Most people simply refer to the edifice as the Barcelona cathedral but it’s real name reveals that it is dedicated to the co-patron saint of Barcelona, Saint Eulalia of Barcelona. She shares this privileged status with fellow co-patron saint, La Mercè, who in turn is celebrated each year on September 24th.

However, locals refer to it as La Seu

If you hear locals referring to the cathedral as La Seu don’t be surprised. The word seu is Catalan for ‘seat’ and is used to refer to the Church because it is the seat of the diocese of Barcelona. The cathedral is home to the Archbishop of Barcelona, Juan José Omella i Omella, who was appointed to the position in 2015. 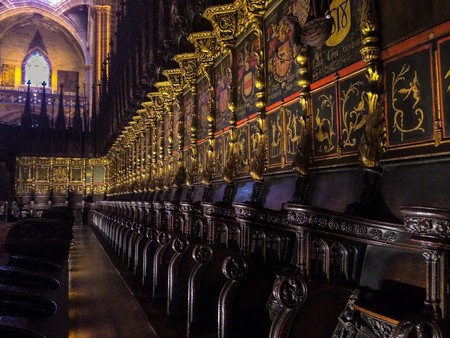 There are over 1,700 basilicas worldwide, only four of which are known as ‘major basilicas’, the rest sharing the name ‘minor basilica’. This special status means that the cathedral has been recognised for its remarkable nature and has been granted a number of privileges accordingly.

And was consecrated in 1339

The cathedral was built over the span of nearly two centuries between the 13th and 15th centuries, with construction beginning in the year 1298. Although the cloister was completed some 150 years later, the building was consecrated in 1339 and has been a major place of religious worship ever since. 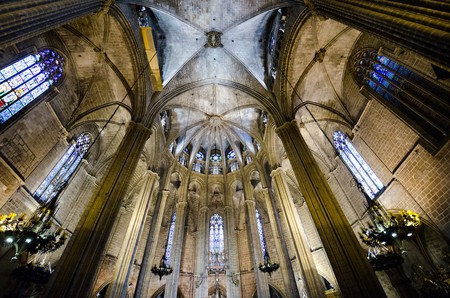 Located in the centre of the historic Gothic Quarter of Barcelona, the cathedral is particularly appreciated by visitors for its Gothic design. The most notable features include pointed archways, the ribbed vaults which are visible from inside the Cathedral and the many gargoyles which can be seen on the roof.

And yet the facade is a neo-Gothic 19th century addition

That’s right. What most people see when they arrive in front of the impressive building is none-other than an 19th century add on designed to replicate the distinctive Gothic features. The result is a rather intensified design, with a much more elaborate finish compared to the original 14th century Gothic features which can still be seen along the sides of the cathedral. 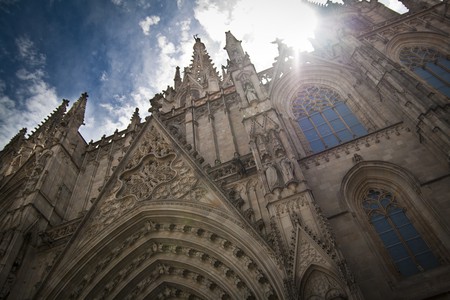 Completed in 1448, the cloister is located just round the corner from the cathedral and boasts a covered walkway which encloses a charming courtyard. Tall palm trees provide shade and create the impression of a secret garden set back from the busy streets of the Gothic Quarter.

And it’s home to 13 white geese

One of the peculiarities of the cloister is the presence of precisely 13 geese which represent the fact that Saint Eulalia is believed to have been just 13 when she died. The geese can often be seen bathing in the Font de les Oques (or ‘Well of the Geese’) which is adorned with a statue of Saint George (patron saint of Catalonia) slaying the dragon. 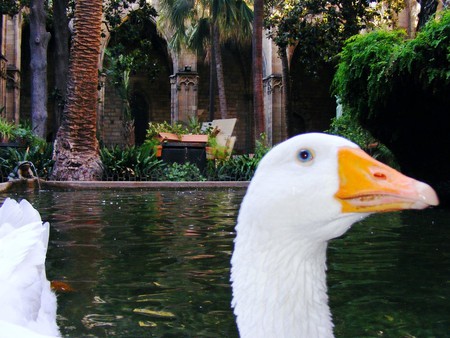 The local residents of the cloister | © David Spender / Flickr

There’s a chapel with a mythical crucifix

The Chapel of Lepanto was constructed in 1407 as a chapter house or place of meetings. The chapel harbours a most unusual crucifix known as the Holy Christ of Lepanto. The latter is remarkable for its slanted shape which, legend has it, occurred when the crucifix was onboard a royal ship which came under cannonball fire. The crucifix is said to have leaned to the side to avoid the cannonball and has remained slanted ever since.

One of the more curious local traditions, the ‘Dancing Egg‘ sees some 12 fountains around Barcelona topped with a small egg which appears to ‘dance’ in the water jet. This tradition dates back to the 17th century and is believed to represent the cycle of the life of Christ in the Catholic faith. 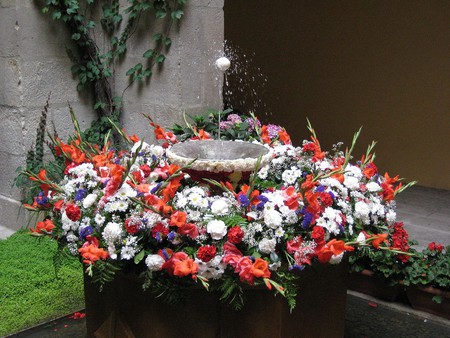 The traditional candles have been replaced by electronic ones

It’s tradition to light a small candle and say a prayer at the shrines of particular saints. However, these traditional candles have been replaced by electronic ones in the cathedral, partly in response to the growing number of tourists to the cathedral and the need to ensure safety.