11 Reasons Why Your Next Ski Holiday Should Be in Spain 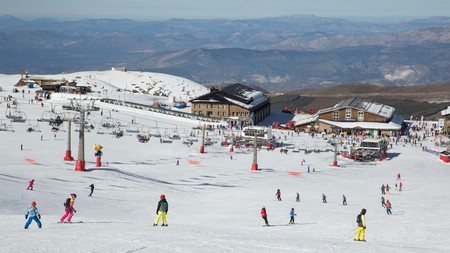 Snow, moguls and ski lifts aren’t things that are commonly associated with Spain. You could be forgiven for thinking the climate there is too warm for skiing, but there are mountainous regions that offer a carving experience just as good as anywhere else in Europe, and a good deal cheaper. Here are 11 reasons why you should hit the Spanish slopes.

The Alps are the most famous mountains in Europe, but Spain is actually the second most mountainous country, after Switzerland. The Pyrenees, Picos de Europa and Sierra Nevada all offer white slopes, as well as some of the most stunning views you’ll find anywhere in Spain. The Pyrenees in particular have a range of resorts to choose from.

The Sierra Nevada is one of the southernmost mountain ranges in Spain. It has a single resort, which by association is the southernmost in all of Europe. It sits an eye-watering 2,100 metres (6,890ft) above sea level, which keeps it open from late November until early May. It boasts some 124 runs, ranging all the way from green to black, and if you’re a boarder, you can take a crack at the Tubo de Borreguiles, a wide boarding-friendly tube with lots of opportunities for jumps and tight turns.

Spain doesn’t have quite the same long history with skiing that France and Switzerland do, but one of its earliest resorts to open is still active and well worth a visit. Baqueira Beret was opened in the Pyrenean Aran Valley in 1964, is frequented by the Spanish Royal Family and offers a wide range of slopes for all experience levels. Across 150km (93mi), you’ll find pistes in all shapes and sizes, and you can stay in the resort itself or pitch up in one of the smaller nearby villages for a slightly more relaxed experience.

The advantage of skiing in Spain is that the travel routes are shorter and easier than in the Alps. Head to Sierra Nevada and you can get from the resort to the coast in an hour by car, which means that during the spring months you can very easily twin a morning on the slopes with an afternoon in the sun, looking out towards the Med from Salobreña or one of the other nearby coastal towns.

Around 60km (37mi) outside of Madrid, you’ll find the Sierra de Guadarrama, the eastern portion of the Sistema Central, which forms the spine of the Iberian Peninsula. There are several resorts along the range, all easily reachable from Madrid and popular with locals, especially Puerto de Navacerrada, which is the closest to the city and easily reachable by train from the capital. A bit further is Valdesquí, which has a great reputation for fresh, powdery pistes.

Like Madrid, Barcelona is also within easy reach of skiing. La Molina and Masella are both quality resorts. La Molina is one of the oldest in Spain, and the country’s first ski lift was unveiled there all the way back in 1943. It has also played host to a number of sporting events, including the Snowboarding World Championships in 2011. Masella neighbours it, sitting on the edge of Tosa d’Alp, one of the highest mountains in the range. Together, the two resorts make up the Alpine 2500.

Anyone who has been to a resort in France or Switzerland knows that even once you account for the cost of travel, accommodation and equipment, you’re still going to end up spending more than you’d hoped. Having a captive audience means that bars and restaurants tend to charge a lot, but in Spain it isn’t the case – a beer will run you the same on the slopes as it would at lower altitudes, and in many resorts the accommodation is also pretty reasonable.

If you’re looking for a quieter, more secluded experience, Spain also delivers, with plenty of smaller resorts dotted around the country. Resorts like Port Aine are busy on weekends but quiet during the week, as most of the visitors are local day trippers, meaning you can enjoy the slopes with minimal traffic. Likewise, the Valgrande-Pajares resort in the Asturias has a mere 25km (16mi) of slopes, making it a great option if you’re just starting out, or simply want to ski in a peaceful setting.

It’s not as busy

While skiing is popular in Spain with locals and tourists enjoying the pistes, it has not yet reached the level of popular resorts such as Val d’Isère or Courchevel. You can enjoy pristine white slopes as well as some great off-piste and cross-country routes, without the crowds.

As stated above, many locals will only visit the slopes for a day, so if you stay during the week, you’ll get a much calmer experience; even when the resorts are busy, it never even comes close to what you might find in places like Val Thorens or Chamonix. This makes it easier on beginners who might be intimidated by crowded pistes, as well as intermediate skiers who want to sharpen their skills without waiting all day to get back on the lift.

If you’re skiing in France, Italy or Switzerland, you’ll be on a diet of beer and melted cheese, whether the latter is on a pizza or sitting below a heat lamp waiting to be drizzled over bread. In Spain, you’ll have a different experience – tapas, wine, paella and just about any kind of roast or stew you can dream up. The laid-back nature of Spaniards also means that the slopes don’t get busy until around 10am and will clear as everyone goes for lunch at 3pm. What better way to round out a day of carving than a big lunch and a siesta?

The sun stays out longer in Spain than in other ski-friendly countries, especially if you head further south. This not only means that you can ski for longer, but also that you won’t get the same crippling cold that constricts other parts of Europe during high season. You can stay out longer, and stay comfortable – just remember to pack your goggles and sunblock.