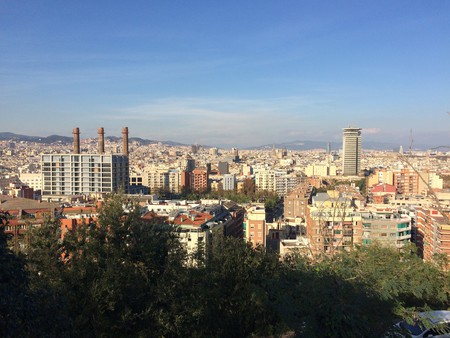 Located at one of the highest points of Montjuïc hill, the Mirador de l’Alcalde, or ‘Mayor’s Viewpoint’, is a terraced belvedere overlooking the city of Barcelona. Reopened in January 2009 after restoration works, the mirador boasts some truly spectacular views over the city. Here are 11 reasons we think it’s the best viewpoint from which to see the city.

You can see nearly all Barcelona’s most famous landmarks

The Sagrada Família? Check. The cathedral? Check. The Torre Agbar? Check. Playing I spy from the Mirador de l’Alcalde gives you an opportunity to tick off nearly all of Barcelona’s most famous attractions. Seeing them from afar gives you a sense of size and perspective, as well as allowing you to see how the different neighbourhoods have developed around each other in space and time.

Montjuïc is steeped in history

Ever since the times of Barcino and the Ancient Romans, Montjuïc hill has played an important role in the history of Barcelona. A symbol of defeat after the Spanish War of Succession, the castle was used as a prison and torture cell for many years. Celebrate this new era of Montjuïc as a place of leisure and peace by taking a moment to reflect on the city’s long and complex history.

Getting there is easy

Despite being located at the top of Montjuïc hill at one of its most elevated points, the Mirador de l’Alcalde can easily be accessed on foot or by public transport. There are buses that take you straight there and connect with the Plaça d’Espanya and the city centre. Walking will take you about 45 minutes to an hour from the Plaça d’Espanya, and you will pass through some beautiful parks and gardens along the way. 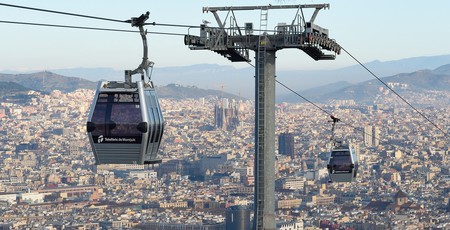 You can even take a cable-car or funicular train…

If you wanted to try one of Barcelona’s more original modes of transport, this is your chance. You can take the Montjuïc Funicular from the bottom of Montjuïc on Avenida Parallel and get a bus from midway up the hill to the mirador. Alternatively, you can get the Aeri del Port cable-car from Barceloneta, over the harbour and up Montjuïc.

… and continue your journey upwards on a cable-car

There are cool gardens to relax in afterwards

The Mirador de l’Alcalde was designed by Catalan architect Joan Josep Tharrats in the 1960s, and as well as the viewing terraces, his design included ornamental gardens for visitors to enjoy as they view the city. The gardens contain native species of plants and elegant water fountains, which make them a great place to relax. 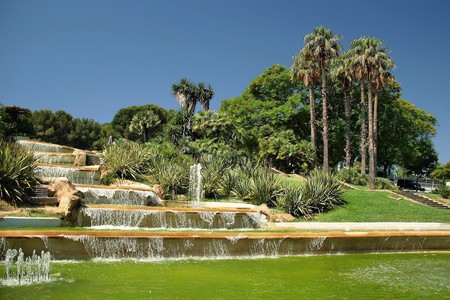 There’s even a bar on hand

OK, we’re not talking cocktails and craft beer, but there is a kiosk at the Mirador serving a selection of drinks (yes, alcoholic ones too) and snacks. Most of the time, the guys behind the bar also pump out some pretty awesome music, so all in all it’s not a bad place to grab a drink with a view.

See a side of Barcelona you’re not familiar with

While the Mirador de l’Alcalde offers impressive views of the city’s main landmarks, it also overlooks the city’s industrial port. This is a part of town that is often overlooked by travellers and rarely seen unless you make the trip to Montjuïc. While it’s not the most beautiful sight, it is impressive to see the industrial backbone that supports the city.

You can see the Magic Fountain on the way down

Regardless of your age, watching the Magic Fountain light up and ‘dance’ to the sound of the best Disney anthems and old-school classics is something you’ve got to experience. Time your visit so that you can watch the dust settle over Barcelona from the Mirador de l’Alcalde and then stroll down to the fountain for the evening show. 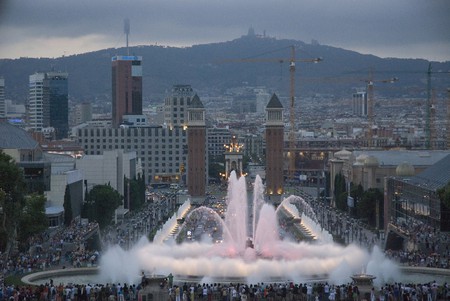 The Carmel Bunkers are no longer a secret anyway

Long considered the best-kept secret in Barcelona, the Carmel Bunkers – abandoned wartime bunkers on the edge of Barcelona – are pretty popular these days. While the advantage is that the bunkers offer a 360º panoramic view, chances are you’ll struggle to find somewhere to sit at weekends, given how many people know about them these days. The Mirador de l’Alcalde is still fairly underrated and unheard of.

There’s even a slide down to the ocean!

OK, so that’s not true. But it would be amazing, and there should be a campaign for this to happen. Until it does though, there is a normal-sized slide just round the corner. (It may or may not be intended for children, but who’s judging?)