11 Locations from Pedro Almodóvar Films that you Can Actually Visit 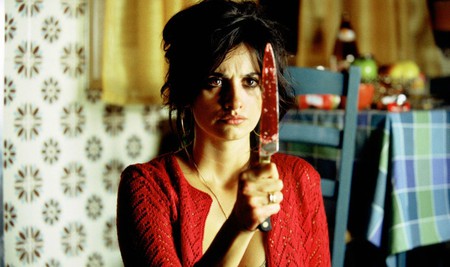 This year marks the 30th anniversary of the film that brought Spanish director Pedro Almodóvar to the international audience, Women on the Verge of a Nervous Breakdown. To celebrate the occasion we take a look at 11 locations around Spain from the director’s films that you can still visit today.

Cine Dore – Talk to Her

This iconic Madrid cinema, home to the Filmoteca Española is such a favourite of Almodóvar he filmed a scene there for his 2002 Oscar-winning film, Talk to Her (Hable con Ella). 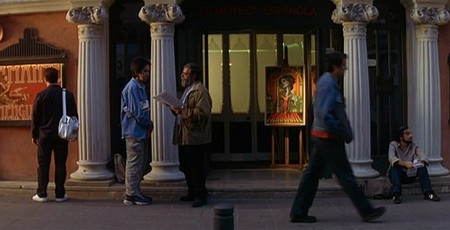 Taberna Ángel Sierra – The Flower of My Secret 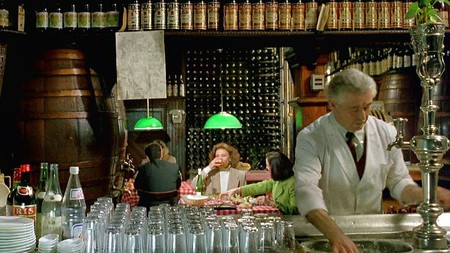 Almodóvar’s 1997 film, Live Flesh (Carne trémula) was filmed in and around Madrid, including below the KIO Towers. These impressive leaning skyscrapers – the first inclined skyscrapers in the world – were under construction during filming and were completed in 1996. In the film, Victor lives in a one-storey building right in the middle of the huge redevelopment that is dwarfed by the KIO Towers. 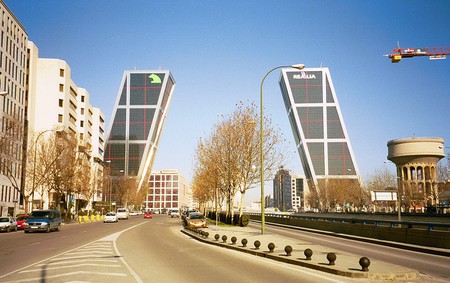 Gran Vía – Women on the Verge of a Nervous Breakdown

The film that brought Pedro Almodóvar to the attention of international audiences, Women on the Verge of a Nervous Breakdown (Mujeres al borde de un ataque de nervios) was released 30 years ago this year. The dark comedy is centred around the apartment of main character Pepa, which has views across to Madrid’s Gran Vía – the Telefonica Building can be spotted in the background. 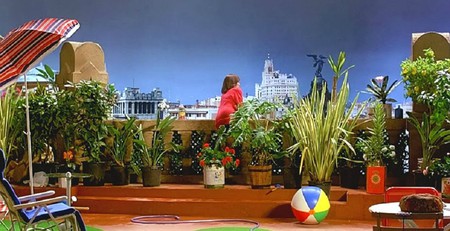 Antonio Banderas plays Ricky in Tie Me Up! Tie Me Down (Átame), Almodóvar’s 1990 film set in Madrid. In one scene, he visits one of the city’s oldest squares, the Plaza de la Villa.

Antonio Banderas on Plaza de la Villa in Tie Me Up! Tie Me Down! | Courtesy Deseo

Plaza Mayor – The Flower of my Secret

One of the final scenes of The Flower of My Secret (1995) takes place on the deserted Plaza Mayor, Madrid’s central square. The plaza celebrated its 400th anniversary in 2017.

Penelope Cruz and Antonio Banderas make cameos as a married couple of baggage handlers at Madrid’s Barajas airport in Almodóvar’s 2013 comedy, I’m So Excited! Cruz is a frequent collaborator of Almodóvar’s and is one of his most famous chicas Almodóvar – Almodóvar girls. 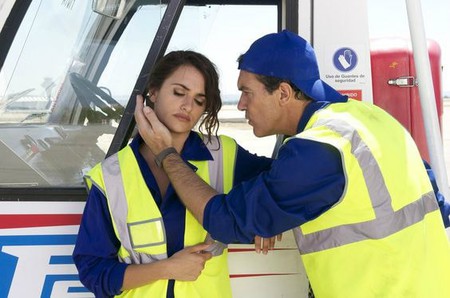 Bellas Artes Theatre – All About My Mother

Almodóvar’s 1999 hit, All About My Mother, whose title is a play on the film All About Eve, was set mainly in Barcelona but features some key scenes in Madrid at the beginning. One scene takes place between Manuela, the main character, and her son Esteban who are going to see a play at the Teatro de Bellas Artes (Bellas Artes Theatre). 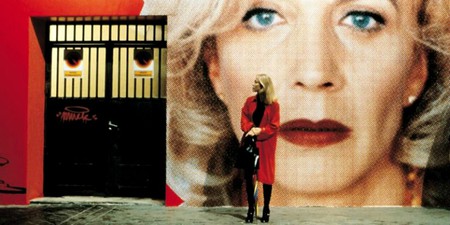 The small town of Granátula de Calatrava was the location of the opening scene of Almodóvar’s 2006 film Volver. The film stars Penelope Cruz as a woman whose mother seems to come back from the dead… or does she? Almodóvar brought the superstitions of his native La Mancha to the screen in this Oscar-nominated film. 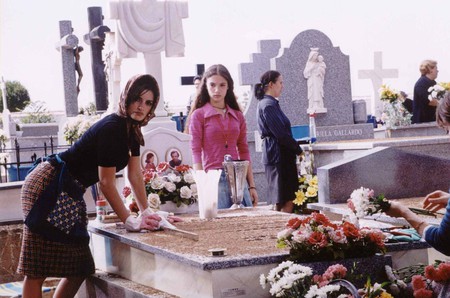 Sagrada Familia – All About My Mother

In All About My Mother, lead character Manuela makes an important journey from Madrid to Barcelona in search of the father of her son. On arrival in Barcelona, she takes a taxi past some of the city’s most famous sights including – of course – Gaudí’s Sagrada Familia.

Palau de la Música Catalana – All About My Mother

In All About My Mother, Manuela stays with her friend Agrado when she arrives in Barcelona. Agrado’s apartment is directly opposite the Palau de la Música Catalana, a famous modernist concert hall, as you can see in a scene in which Manuela hangs out the washing on the balcony.