11 Films Shot in the Canary Islands 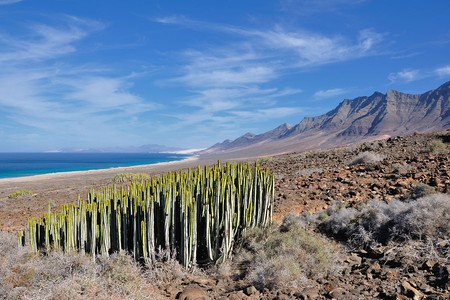 Blessed with practically perennial sun combined with no shortage of sandy coastlines, the Canary Islands are a well-known holiday hotspot – but this volcanic archipelago offers more than just beach resorts. Filmmakers of all genres have long taken advantage of the chameleon-like landscape of the islands, using the dramatic geography to create and recreate other worlds for the cinema screen. Here are just some of the movies that have been filmed in the Canaries.

This hugely popular novel-turned-film stars the inimitable Gregory Peck and Las Canteras beach was one of the key settings, used for the poignant closing scenes of the film. When Ron Howard re-made the classic tale (In The Heart of the Sea), they chose to film in exactly same location on the island as the original.

This now classic movie starring Raquel Welch is set in prehistoric times and the volcanic landscapes of the Canaries lent themselves perfectly to the film’s (extremely dubious) storyline where dinosaurs and humans co-existed. Teide National Park in Tenerife and Timanfaya and Lago Verde in Lanzarote made up the majority of the sets providing the perfect primeval backdrop.

Sporting a stellar cast including Sam Worthington, Rosamund Pike, Ralph Fiennes and Liam Neeson, these epic films depicting the relationship between man and the mythological gods of ancient times were filmed in Tenerife and multiple locations across the Canaries. Director of Wrath of the Titans, Jonathan Leibesman said, “The Canary Islands gave us great contrasts, including the beautiful blue sea, dusty landscapes and townscapes, wide open areas to stage a massive battle in the middle of a volcano. We just couldn’t have asked for more out of one locale.”

A classic Sacha Baron Cohen lampoon, this wacky comedy was partly shot on Fuerteventura. This Canary Island offered the perfect desert landscape to represent the fictional Republic of Wadiya, without having to go as far as East Africa (where the country is supposedly located).

This action-packed film starring Vin Diesel and the late Paul Walker needed a place that would welcome the filming of multiple crashes, explosions and tank chases. Tenerife was the perfect setting, allowing all the sets ups required by the movie with the dramatic landscapes to support them.

This biblical epic from Ridley Scott was a co-production with Spain with scenes being shot on the mainland in Andalusia and in the Canaries in Fuerteventura. The film’s production team spent three months building sets to recreate the majestic civilisation and landscapes of ancient Egypt.

This beautiful Ron Howard film recounts the sinking of a New England whaling ship in 1820 which later inspired the writing of Moby Dick. La Gomera, the second smallest of the Canary Islands, was carefully chosen for its lush greens, wild landscapes, unique flora, and untouched bays.

A complex story of love, war, secrecy and lies, this haunting film was shot in multiple locations. Las Palmas was the location for Marianne’s (Marion Cotillard) apartment in Casablanca, Parque Natural de Corralejo in Fuerteventura doubled as the dunes of the Sahara Desert, and Antigua Fabrica de Hielo in Plaza Manuel Becerra became the German Embassy in Casablanca.

This intense American action thriller starring Matt Damon travels through various exotic destinations as the lead character is chased across the globe by the CIA. In a setting meant to be Greece, they actually used Santa Cruz in Tenerife as a double.

When Eva (Shirley MacLaine) accidentally receives an insurance payout for $5,000,000 instead of $50,000 she and her best friend (Jessica Lange) decide to go on the adventure of a lifetime. Gran Canaria offered the striking sea views, luxurious hotels, and plentiful sun.

To be released in 2018, this sci-fi feature focuses on a military family taking part in a groundbreaking experiment of genetic evolution and space exploration. The film was shot entirely on location in Gran Canaria.