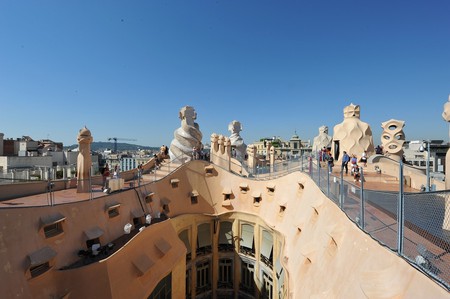 The Casa Milà seen from above CC0 Pixabay

One of Barcelona’s most popular landmarks, the Casa Milà is located on the city’s prestigious Passeig de Gràcia and just a short walk from the Plaça Catalunya. A remarkable edifice designed by one of Spain’s most famous architects, Antoni Gaudí, the Casa Milà’s striking façade is one of its most unique features.

The Casa Milà is commonly referred to as ‘La Pedrera’

Don’t be surprised if most locals refer to the building as La Pedrera, meaning the quarry. It seems that the Casa Milà’s jagged stone facade – reminiscent of rough blocks of rock – has earned it the nickname which is even used in official communication such as in the Provença metro station.

But gets its name from its original owner

The Casa Milà is so named after the person who originally commissioned its construction, Pere Milà, although his wealthy wife largely funded the project. Roser Segimon was the widower of a so-called Indiano, an entrepreneur who had made his wealth in South America before returning to Spain. When she remarried she purchased a building on Passeig de Gracià which would be entirely demolished to make way for the Casa Milà. 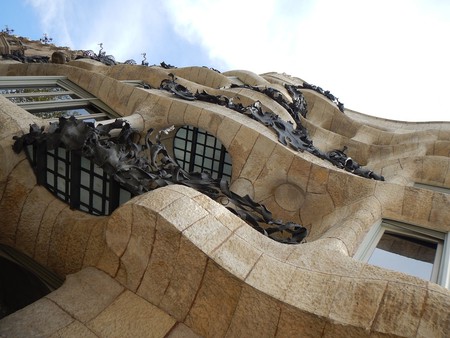 The design is by famous Catalan architect Antoni Gaudí

Perhaps Barcelona’s most famous architect, Antoni Gaudí is best known for his masterpiece the Sagrada Família as well as nearby Casa Battló and the Park Güell. Gaudí was already a successful architect by the time he was commissioned to design Casa Milà, praised for his championing of the the Catalan modernist style.

And it’s one of his most controversial designs

The project was considered so heterodox at the time that there was general uproar when the plans became public. The building was publicly ridiculed by local critics and the newspapers because of its unusual design: an undulating, asymmetrical facade, rough stone appearance, the imposing wrought-iron balconies, etc. 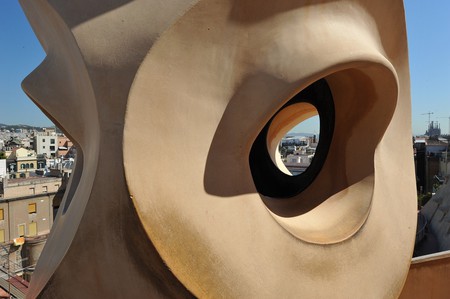 Detail from the roof of Casa Milà CC0 Pixabay

The building is made with rock from the nearby mountains

If the striking building is reminiscient of a quarry it might also have something to do with the fact that it is made from large blocks of rock from the nearby Garraf massif. The stone is limestone found in the Garraf Natural Park located south of Barcelona, near the seaside resort of Sitges.

Construction began in 1906 and came to an end some four years later in 1910, immediately after Antoni Gaudí finished work on the Casa Batlló. However, the building as a whole wasn’t declared inhabitable until 1912 when Gaudí signed off on it and gave it his final seal of approval. 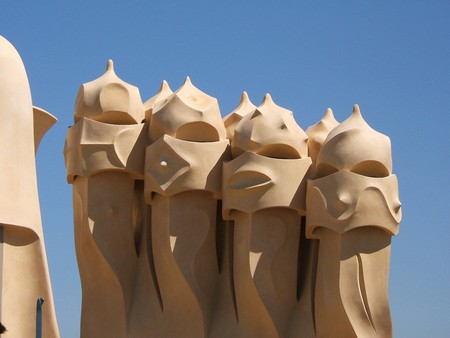 The design is rich in Catholic symbolism

A devout Catholic, Antoni Gaudí was prone to incorporating religious symbolism into his designs. The Casa Milà features statues of the archangels St Michael and St Gabriel, as well as figures of the Virgin Mary and excerpts from the Rosary. However, Gaudí’s original plans called for even more religious statues, such as tall crucifixes but these plans were scrapped after a rise in anticlerical feeling among locals deterred the building’s owner.

Believe it or not, among the many functions served by the building over the course of its history it once housed a bingo hall. It also served as the offices of a cement manufacturer and an academy. However the cost of maintaining the building were particularly high which deterred renters and lead to the building becoming dilapidated in the seventies. 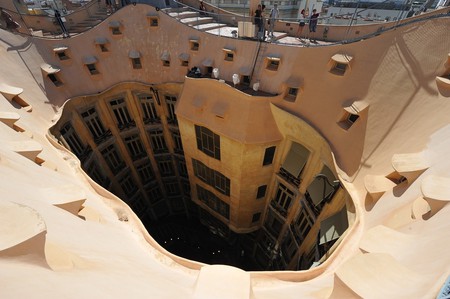 The Casa Milà seen from above CC0 Pixabay

When the civil war broke out in 1936 the Milà family were on holiday abroad and their home was in part taken over and collectivised by the local branch of the Unified Socialist Party of Catalonia. The Milà’s returned to find their house occupied and decided to flee the war, taking some of the their most valuable belongings with them until it was safe for them to return.

As surprising as it might sound, part of the original wrought-iron work from Casa Milà is on show at NYC’s Museum of Modern Art. The piece was removed from Casa Milà in the 1920s and discarded as considered of little value at the time. However a number of years later the piece turned up in the US and was donated the MoMA where it remains in their collection today.