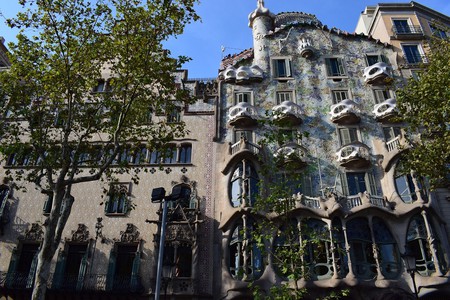 Located on Barcelona’s famous Passeig de Gràcia, the Casa Batlló is one of the city’s most treasured landmarks and most popular attractions. Whether you’re a massive architecture fan or just curious to see what all the fuss is about, here are our top tips to prepare you for a trip to this modernist landmark.

Arguably the most famous Catalan architect of all times, Antoni Gaudí is the mastermind behind many of the city’s most iconic landmarks. The Sagrada Família, one of the world’s most unusual churches, was also designed by Gaudí, and so too was La Pedrera, located not far from Casa Batlló. Despite his fame, Gaudí died after being hit by a tram and mistaken for a pauper, resulting in him being left by the side of the road to die.

Like most of Gaudí’s designs, Casa Batlló is a modernist building

Antoni Gaudí is considered a pioneer of what is now called Catalan modernism or Art Nouveau, a style discernible by its preference for rich decoration and a taste for asymmetry and organic themes. Other notable modernist buildings in Barcelona include Lluís Domènech i Montaner’s Palau de la Música Catalana and Hospital de Sant Pau, as well as Josep Puig i Cadafalch’s Casa Martí, now home to the Els Quatre Gats restaurant. 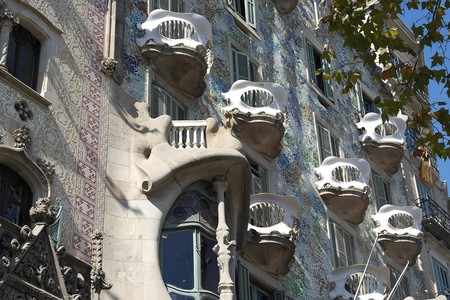 Its nickname is ‘the House of Bones’

Among locals, the Casa Battló has earned itself the nickname Casa dels ossos or ‘House of Bones’ in Catalan. The reason for this is that, if you look at the building’s shape and structure, it has something rather visceral about it. The elements of the facade made with undulating sandstone appear rather bone-like at moments, while the room known as the Loft is reminiscent of a ribcage, with some 60 catenary arches painted in white.

It was nominated for best design of the year… and lost

It may seem incredible now, but in 1906, when Gaudí had finished his remodelling of the building, the Casa Batlló was nominated for best design of the year by the local council… and lost! At this time there were a number of other architects competing for attention. Notable houses like Casa Ametller, Casa Lleó Morera, Casa Mulleras and Casa Josefina Bonet can all be found within a short distance from each other. 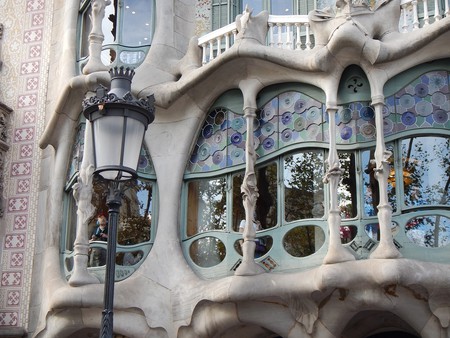 The house was inhabited until the 1950s

The Casa Batlló may look like something out of a fairy tale, but the building was in fact designed as a home and was inhabited by members of the Batlló family until the 1950s. Only then was the house sold and later turned into a function building that could host up to 2,500 people. These days, most people who pass through the doors of Casa Batlló are curious tourists and architecture lovers.

The building is decorated with a mosaic style named trencadís

Widely considered to be one of the first to use the technique known as trencadís, Gaudí used this particular form of mosaic in many of his designs. Perhaps the most famous example is in the Park Güell, on the undulating park benches and the iconic salamander. Meaning ‘broken’ or ‘shattered’ in Catalan, trencadís is a style of mosaic which uses shards of tile and chinaware cemented together. 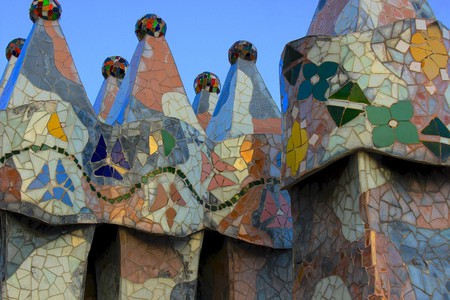 There are no straight lines anywhere in the design

One of the recurring features of modernism was a preference for curved lines over straight lines, and Gaudí took this principle to heart in much of his work. According to the great architect, there were no straight lines and right angles in nature, and so he thought there shouldn’t be any in designs made by humans, either. Most of the columns, walls and other features where one might expect to find straight lines are instead designed with curved lines or lines on the bias.

The roof is said to resemble a dragon

One urban legend surrounding Casa Batlló is that is resembles a sleeping dragon and that it could even represent Sant Jordi or Saint George, the patron saint of Catalonia. Proponents of this theory point to the arched roof, covered in tiles resembling the scales on the back of a large dragon. What’s more, the small turret to the left of the roof is said to represent St George’s lance, plunging into the dragon. 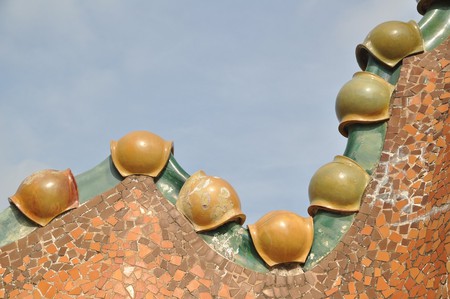 Detail of the roof of Casa Batlló | © Lenalensen / Pixabay

Although these days the building looks 100% Gaudí, the Casa Batlló as we know it is in fact a remodel of a preexisting house. Originally built in 1877, the house was bought by wealthy textile factory owner Josep Batlló in 1900 and he commissioned Gaudí to redesign the home. Along with aesthetic modifications, Gaudí also added extra floors, completely remodelled the main apartment and widened the light well at the centre of the building.

Although these days a number of more modern buildings block the way, it’s believed that once upon a time it was possible to see the Sagrada Família from the rooftop window of Casa Batlló. Gaudí was a devoutly religious man and it would not have been surprising for him to include such a feature in his design. Anecdotally, his original design for the Sagrada Família – whose completion is expected to be around the centenary of Gaudí’s death, in 2026 – planned for the church to be just one metre shorter than Montjuïc hill, as Gaudí believed that the creations of humans should not be larger than God’s.