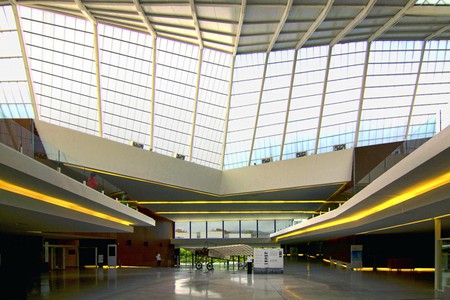 Granada is and always has been a city for artists. Inspired by the presence of the mighty Moorish fort that overlooks the city, the crisp peaks of the Sierra Nevada mountain range or the other-worldly neighborhoods of Albaicín and Sacromonte, over the centuries they have earned Granada a reputation as the (unofficial) artistic and creative hub of Andalusia. Here are the best galleries in the city, for both classic and contemporary art. 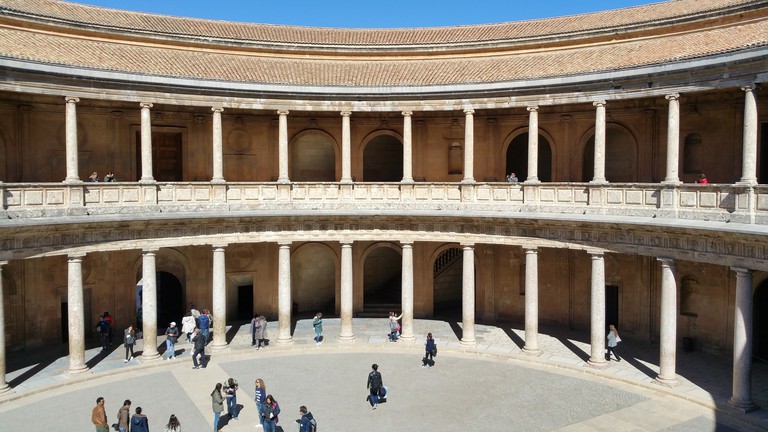 Internal courtyard of the Charles V Palace, home to Granada's Museum of Fine Arts | © waldomiguez/Pixabay
Situated in the Charles V palace in the Alhambra complex, just off the main circular courtyard, this is Granada’s leading art museum for classic works. It houses over 2,000 pieces, including a number of important religious paintings and sculptures dating from the 16th century onwards, of which the most famous is a sculpture by Jacobo Florentino called ‘The Burial of Christ’. Like the palace itself, this collection serves a reminder of the Catholic conquest of Moorish Granada, and of successive Catholic monarchs’ attempts to stamp their own religion and identity on the Alhambra. The Museum also has a number of works of local artists Alonzo Cano, also an architect who designed the façade of Granada’s cathedral.
Open In Google Maps
Palacio de Carlos V, S/N Calle Real de la Alhambra, Granada, Andalucía, 18009, Spain
+34958563508
Visit Website
Give us feedback

Park
Facebook
Email
Twitter
Pinterest
Copy link
Share
Map View
A particularly fascinating permament exhibition at Granada’s Science Park, Moorish Spain and the Sciences takes a visually-orientated tour of the advanced scientific work carried out by the Moorish rules of southern Spain between the 8th and 15th centuries. Interactive installations sit alongside paintings, drawings and panels explaining the remarkable discoveries made during this time and enable you to better understand why Moorish Spain – in particular its great capital Córdoba – were at the scientific and intellectual cutting edge.
Open In Google Maps
s/n Avenida de la Ciencia, Granada, Andalucía, 18006, Spain
+34958131900
Visit Website
Give us feedback 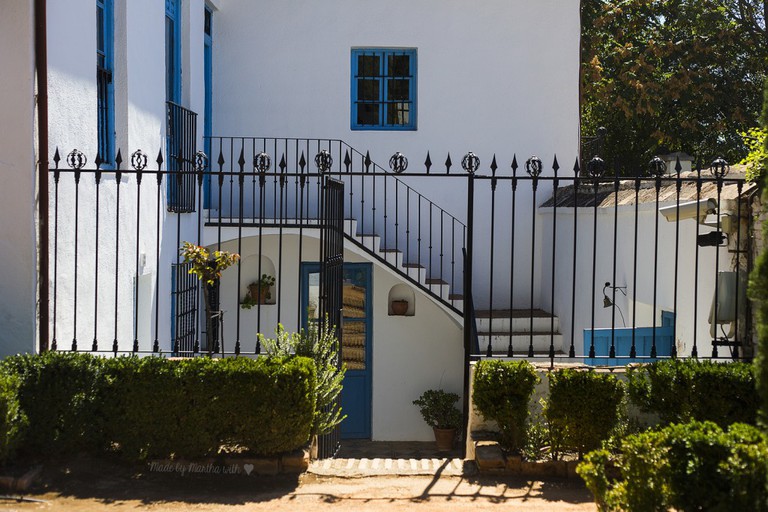 Manuel de Falla museum | © Marta Gómez/Flickr
This little gallery and museum is named after the Cádiz-born musician who became one of the most prominent Spanish composers of the 20th century. Many works in the collection of paintings, engravings and sketches relate to another key figure of Spanish culture, Don Quixote of La Mancha, who provided inspiration for Falla’s compositions.
Open In Google Maps
s/n Paseo de los Mártires, Granada, Andalucía, 18009, Spain
+34958222188
Visit Website
Give us feedback

Park
Facebook
Email
Twitter
Pinterest
Copy link
Share
Map View
The beautiful setting for this revealing collection of documents, sketches and photographs is a tranquil park also bearing the name of Granada’s most famous writer. The elegant townhouse that houses these artifacts is where Lorca was born and lived until he was 11. Lorca was murdered during Spain’s devastating Civil War of 1936-39 and his exact burial spot – thought to be somewhere outside the boundaries of the city’s official cemetery – is still not known.
Open In Google Maps
Casa-Museo Federico García Lorca, s/n Calle Virgen Blanca, Granada, Andalucía, 18004, Spain
+34958849112
Visit Website
Give us feedback

Building, Art Gallery
Facebook
Email
Twitter
Pinterest
Copy link
Share
Map View
One of Granada’s sleekest, most contemporary galleries, Cidi Hiaya displays a range of oils, watercolors and graphic art by local artists as well as those from further afield. A great place to find something a little out of the ordinary from Granada’s best emerging artists, this gallery is housed in a beautiful 16th century building, with a gorgeous courtyard, in the heart of Realejo – one of Granada’s coolest neighborhoods.
Open In Google Maps
9 Calle Pavaneras, Granada, 18009, Spain
+34958555555
Give us feedback 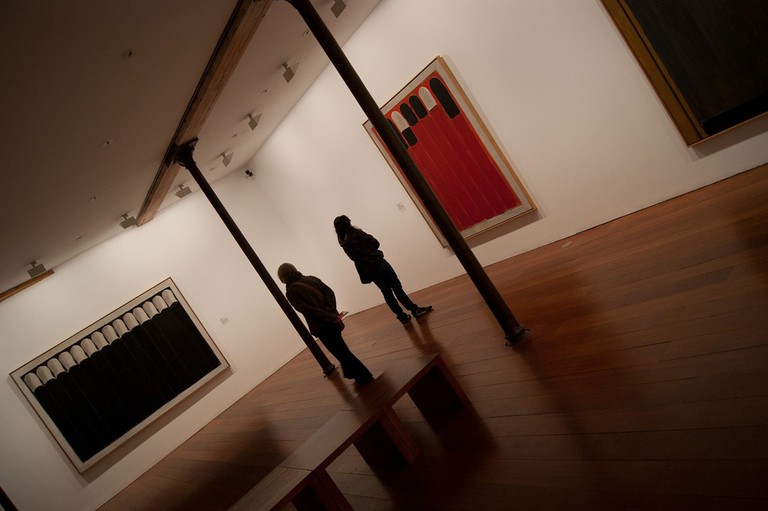 José Guerrero Center | © Enrique Fernández/Flickr
A superb contemporary art gallery and educational center located right next to Granada’s cathedral and Alcaiceria market, formerly the site of its Grand Bazaar. Guerrero was born in Granada in 1914 and became a leading exponent of abstract art in Spain when he returned to Madrid in 1965, after spending 16 years in the USA. This fascinating gallery holds a permanent collection of Guerrero’s work, as well as a exhibitions of leading contemporary artists and superb art-educational events.
Open In Google Maps
8 Calle Oficios, Granada, Andalucía, 18001, Spain
+34958220119
Visit Website
Give us feedback 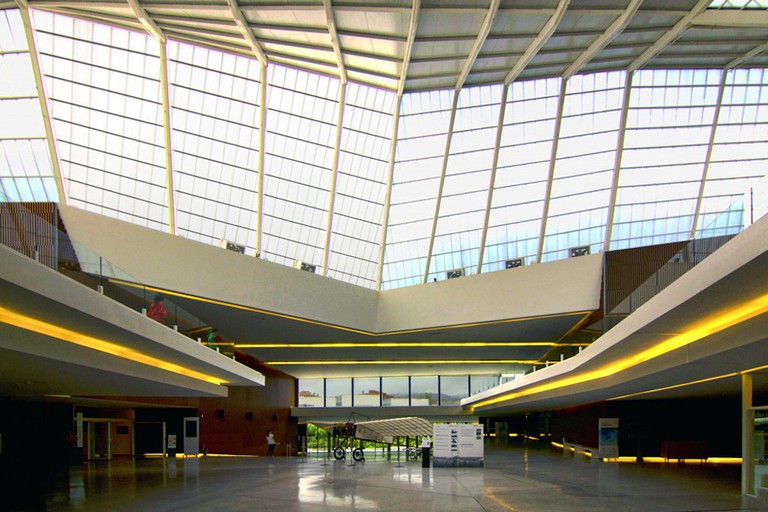 A futuristic modern space in Granada's Science Museum | © Wojtek Gurak/Flickr
A colorful and powerful window display on the busy throughfare of Gran Via lures you into this sophisticated collection of art for art’s sake (one of the gallery’s driving principles). Sculptures and paintings from both local and international artists are displayed in a white, minimalist space and the gallery also runs a comprehensive website featuring biographies of all the artists whose work it displays.
Open In Google Maps
13 Calle Gran Vía de Colón, Granada, Andalucía, 18001, Spain
+34958221553
Visit Website
Give us feedback

Museum
Facebook
Email
Twitter
Pinterest
Copy link
Share
Map View
This excellent gallery and art museum is housed in the grand, 15th century house built by the Pisa family after Granada was taken from the Moors by Ferdinand and Isabella in 1492. The Pisas are said to have invited a sick Saint John into their home in order to care for him, yet their efforts couldn’t prevent him dying, in this house, in March 1550. Today, this beautifully-housed collection features paintings, engravings and general iconography related to the Saint.
Open In Google Maps
1 Calle Convalecencia, Granada, Andalucía, 18010, Spain
+34958222144
Visit Website
Give us feedback

Another multi-use center that also hosts performance art, this is one of the places to take the pulse of Granada’s young artists’ scene. Centrally located by the river Darro at the foot of the old Arabic quarter, the Young Arts Center exhibits paintings, drawings and sometimes photogrpahy from the city’s up-and-coming artists or art students and most weeks there is also perfomance of some kind to attend.