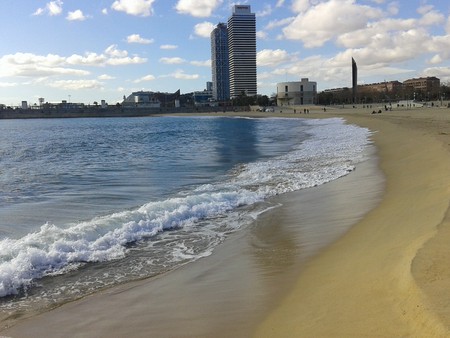 Let’s take a photographic walk down Barcelona’s seaside, which stretches from the beach of La Barceloneta until the urban silhouette of the ‘three chimneys’ in the Besós district. Although the city has turned its face towards the sea only since the Olympics of 1992, now all of its beaches are easily accessible through public transportation, and they all have a very well developed infrastructure. A walk down Passeig Marítim, indeed, warrantees a good time all year round. Look at these ten snapshots of Barcelona’s sea landscapes, and come to see this marine beauty with your own eyes!

Moments of Bliss and Freedom

Passeig Marítim of Barcelona is always full of photographic opportunities: you’ll be surrounded by local runners, roller-skaters, and idle walkers, all of whom come here to enjoy the sun and the fresh sea air; without forgetting about the swift and self-sufficient seagulls flying around! The landscapes, indeed, are an epitome of harmony and joy – especially in the early mornings! 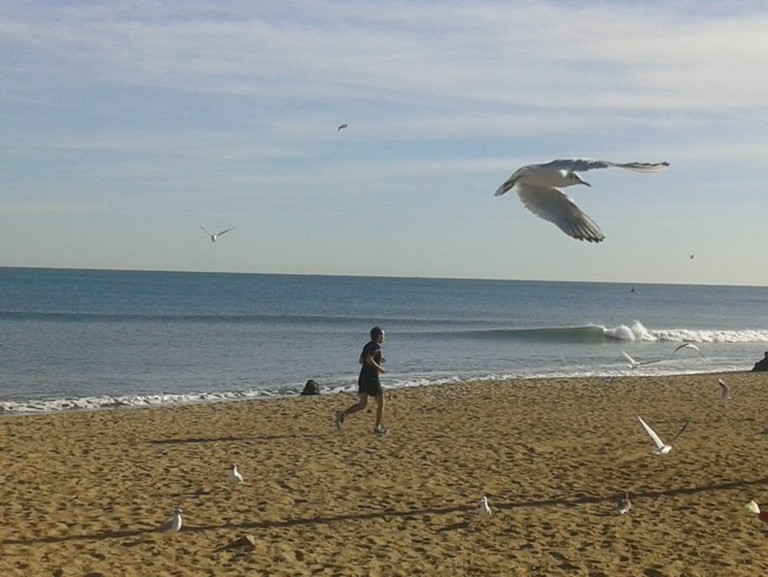 La Barceloneta: the swiftness and the fteedom | Courtesy of Elena Isaeva

The Dynamic Old Port of Barcelona

The Old Port of Barcelona (Port Vell) served historically as the main connection between the sea and the city. Nowadays, it is one of the key promenade areas both for locals and tourists. Indeed, here you will find an impressive concentration of the cult venues for leisure, as well as spectacular landscapes. Take a bike ride to see the wooden swing bridge of Rambla del Mar, the picturesque construction of the cable car line, the Maremagnum shopping mall, (which is never closed on Sundays) or the numerous restaurants with a seductive smell of fresh seafood. In case you want to see the sea itself, take a marine excursion in the legendary Golondrinas boats, situated near the Columbus Monument. By the way, this statue has its own observation platform (Mirador de Colón), so do not miss out on taking a look at Barcelona’s Old Port from up high! 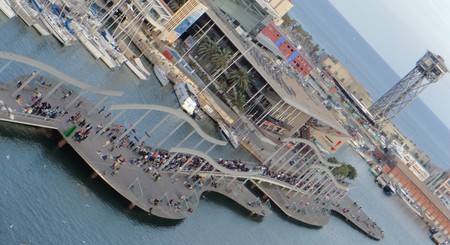 Monument to the Skill of Swimming

This sculpture, called ‘Hommage to Swimming,’ was created in 2004 by the renowned Spanish artist Alfredo Lanz. Its silhouette symbolizes the different styles of swimming, and it is situated right near the Club Natació-Atlètic, a huge sporting complex, and the swimming pool of La Barceloneta. Come here to take your own picture in front of this elegant piece of modern art, which looks especially impressive during bright and sunny days. 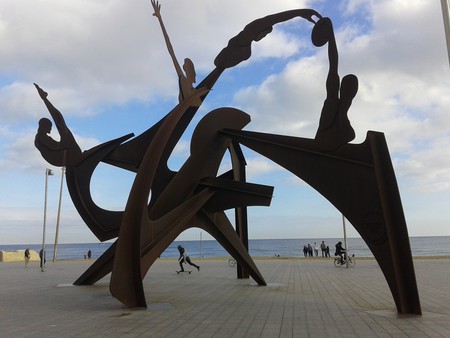 The seaside area of Barcelona has been used by many modern artists for their self-expression. Some controversial works, such as the W-hotel and ‘The Cubes‘ statue, have already been converted into the city’s emblems and are a typical background for tourist photos. There are several temporary artistic expositions on Barcelona’s beaches, but you should hurry up to see them with your own eyes before they end! For instance, these ‘Trash People,’ by the German artist H.A. Schult, were on display on the beach of Somorrostro only during September 2013. The aim was, actually, to remind the tourists that they should behave sustainably and avoid soiling the beaches! 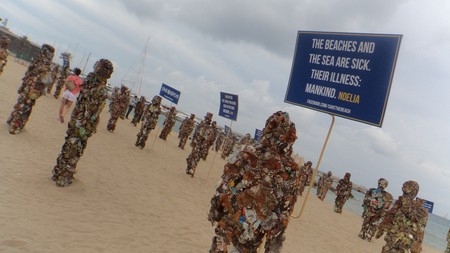 Installation at the Seaside | Courtesy of Elena Isaeva

Naïve Art on the Piers of La Barceloneta

If you step on one of the piers of La Barceloneta, some bizarre images carved into the massive stones might catch your eye. These human and animal shapes were carved by anonymous amateur artists very recently. They are not recognized as art just yet, but they already inspire people’s imagination and raise some questions. Indeed, what could these rare artistic messages mean? Is it a new kind of street art in Barcelona? Will it soon be prohibited like graffiti or, on the contrary, become a trendy and fashionable decoration on the city’s seaside?

The Colors of the Summer Sea

During the summer months, the seaside area of Barcelona becomes extremely popular for pastimes. On those days, the red-hot sand is peppered with colorful towels and umbrellas, and the sea is smooth, quiet and turquoise-blue. Aside from idle sunbathing, you may also want to join the numerous sporting activities available, as well as free yoga classes and beach parties. 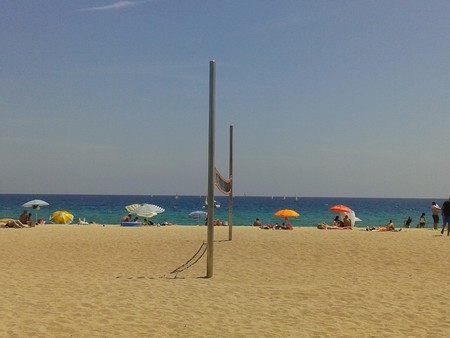 Storms are the Best for Surfing

Strong winds and rainy weather do not mean that there is nothing to do at Barcelona’s seaside. These are, actually, ideal times to capture the most poetic snapshots of the restless foamy waters, and to observe the local surfers. So, don’t discard a walk down the city’s beaches even if it’s a gloomy November or February day.

Barcelona’s Port Olímpic, with its emblematic two skyscrapers and the gigantic fish by Frank Gehry, is one of the most vibrant marine areas at night: the city’s casino and the most fashionable restaurants and disco-bars (Pacha, Shoko and Carpe Diem) are situated here. If you are not up for a noisy party, simply come here in the evening for a walk – the charmingly illuminated buildings right in front of the dark sea create a unique aesthetic and a romantic atmosphere. 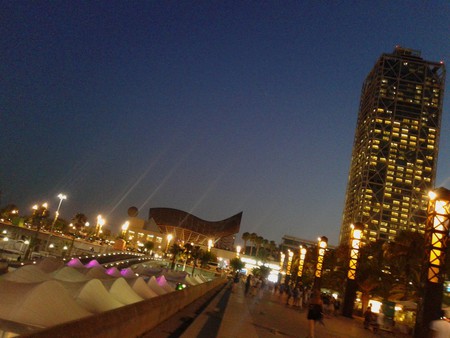 The Fog by the Sea

Dense fog is not typical weather for Barcelona, but, still, sometimes it comes to these lands and adds a new surreal visual effect to all the buildings that you are used to! A walk around Port Olímpic, where you can barely distinguish the shapes of the massive twin towers or the palm trees, is an unusual and curious experience. 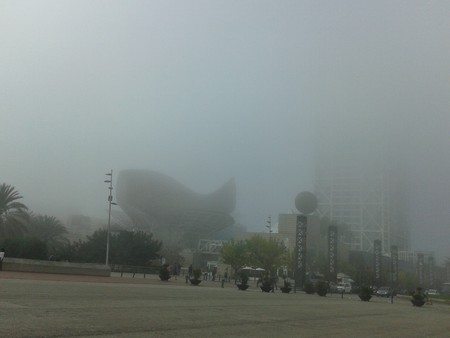 The Fog in Bcn | Courtesy of Elena Isaeva

A Seaside Walk after the Rain

After the rain, it is pure bliss to take a walk along the sea, to breathe the freshest air and see the bizarre evening light reflections on the puddles. Each of Barcelona’s beaches has its own special charm, be it the centrally located Barceloneta or the remote Bogatell beach. 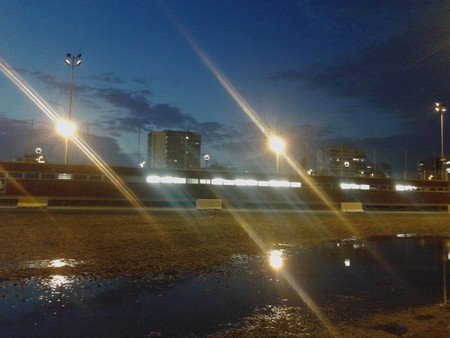 After the rain | Courtesy of elena Isaeva / nelenelenblog.wordpress.com
Give us feedback