10 Great Theaters You Should Visit In Barcelona 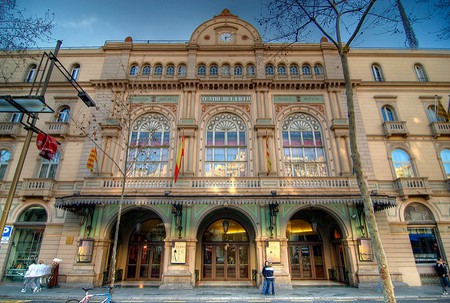 Barcelona is a perfect place to enjoy the true masterpieces of theater. There are more than 60 theaters in the city – some are situated in exquisite buildings rich with history, and others occupy tiny basements, totally unnoticed from the street, where patrons can intimately observe the actors’ work. Culture Trip presents a guide to the greatest theaters in Barcelona. Quick tip: don’t forget to check the language of the shows – they can be held in Spanish, Catalan, or partially in both.

Building, Cinema, Theatre
Facebook
Email
Twitter
Pinterest
Copy link
Share
Map View
The Coliseum Theater offers entertaining shows with elements of cabaret or musical. The venue is a popular spot among locals and tourists. Coliseum 0nly became a theater in 2006, after the renovation of its building. Opened in 1923, it served as Barcelona’s main and oldest cinema for most of its history. The Coliseum Theater catches the eye due to its decorations, such as the cupola, two towers, arch of triumph, and the images of Greek muses on the façade. Such architecture was inspired by the building which houses the Paris Opera and imitates the French Beaux-Arts style.
Open In Google Maps
595 Gran Via de les Corts Catalanes, Barcelona, Cataluña, 8007, Spain
+34932159570
Visit Website
Give us feedback 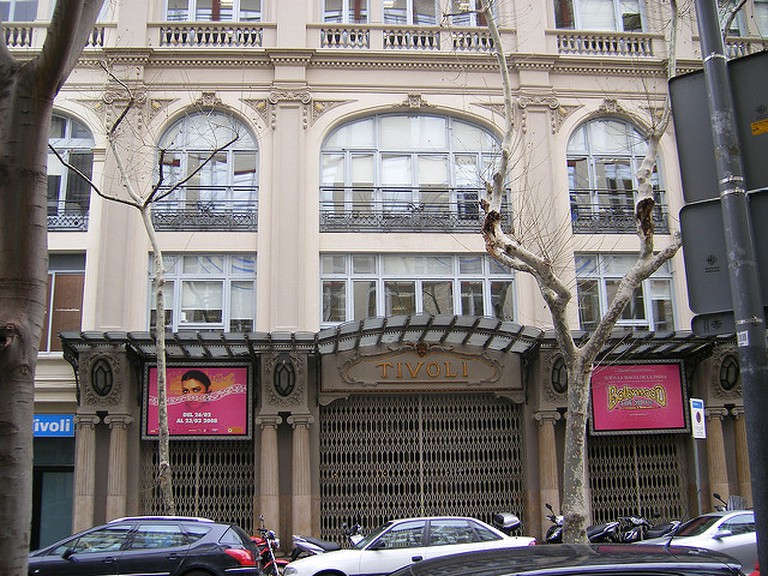 Tivoli teatro | © trash world / Flickr
The Tivoli Theater is another important Barcelona venue for music and opera performances. It is the city’s second largest theater, after El Gran Teatre del Liceu. The Tivoli dates back to 1849, when the Gardens of Tivoli were used as an open-air area for concerts, poetry readings, and zarzuelas. The popularity of these shows grew so extensively that it was decided to create a proper building. The Tivoli Theater’s stage has hosted many world opera premiers and many famous and respectful Catalan actors. In the first part of the 20th century, its hall was also used for political meetings and as a cinema. The luxurious interiors of the Tivoli Theater are filled with history and inspiration. Spanish director Pedro Almodóvar used them in his film Todo Sobre Mi Madre (All About My Mother).
Open In Google Maps
8 Carrer de Casp, Barcelona, Catalunya, 8010, Spain
+34932159570
Visit Website
Give us feedback 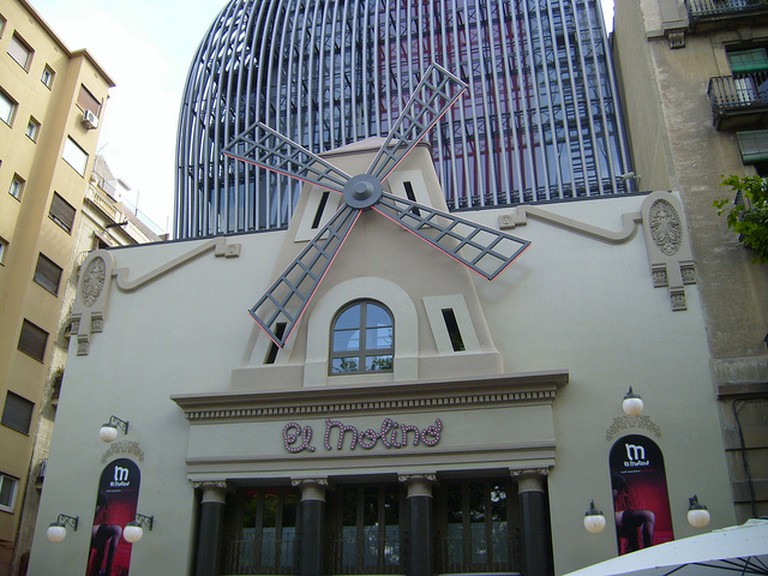 El Molino | © Oh-Barcelona /Flickr
El Molino is a legendary music hall near avenida del Parallelo, a Barcelonese analogue of the famous cabaret Moulin Rouge of Paris. Founded in 1898, it changed proprietors several times, the repertoire’s focus, and even the official name; from 1910 through 1939 it was called ‘El Petit Moulin Rouge’ (‘Little Moulin Rouge’). During these years the façade of the building was decorated with huge mill flies (like its French prototype) and became a visual emblem of the Poble-Sec area for many decades. When Franco came to power, the cabaret was forced to change its foreign name into Spanish. Since then it has been known as ‘El Molino.’ Nowadays, having been totally remodeled according to the latest technological needs, it offers cabaret, flamenco, and other music programs dedicated to genres from pop to electronic.
Open In Google Maps
99 Carrer de Vila i Vilà, Barcelona, Catalunya, 8004, Spain
Visit Website
Visit Facebook page
Give us feedback 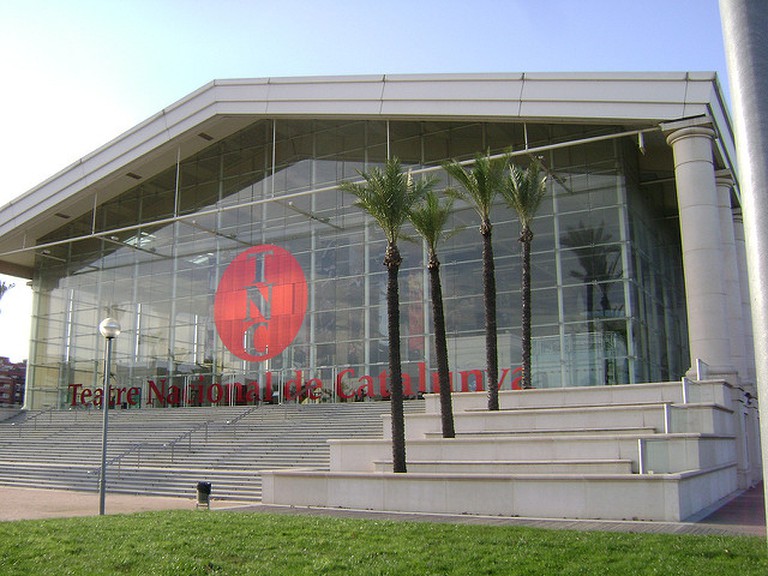 Teatre Nacional de Catalunya | © Francesc_2000 /Flickr
Teatre Nacional de Cataluña (TNC) was created in 1996 to be Barcelona’s paragon venue for high quality theater productions. Its artistic approach corresponds to the present day, but based on classical theater traditions. In its repertoire you’ll mostly find works by Catalans and foreign classics such as Shakespeare, Moliere, Lorca, and Schnitzler. This combination of traditionalism and modernity can be seen the building itself; the façade resembles the Classical Greek temple, but the interiors are made of modern materials and do not have the abundant and old-fashioned decorations typical of classic theaters. The TNC was designed by Ricardo Bofill, a Catalan architect, who later created another Barcelona landmark: Hotel W in the Barceloneta district.
Open In Google Maps
1 Plaça de les Arts, Barcelona, Catalunya, 8013, Spain
+34933065700
Visit Website
Visit Facebook page
Give us feedback

Theater
Facebook
Email
Twitter
Pinterest
Copy link
Share
Map View
If you value contemporary independent theater, the freedom of the director’s vision, and the literature of postmodernism, you should definitely visit Sala Beckett. The theater was set up in 1989 with an objective to promote modern Catalan and foreign plays with up-to-date plots and heroes. Each new performance on the stage of Sala Beckett represents fresh scenography, independent of commercial institutions, and an in-depth approach to the text. Sala Beckett has received positive notices from many newspapers and gotten an award from the National Theater of Catalonia for its support of Catalan theater writers.
Open In Google Maps
232, 228 Carrer de Pere IV, Barcelona, Catalunya, 8005, Spain
+34932845312
Visit Website
Give us feedback

Building, Theatre
Facebook
Email
Twitter
Pinterest
Copy link
Share
Map View
At Mercat De Les Flors, you can watch the most experimental and contemporary dance productions by both Catalan and international companies. Each show offers something new or provocative, including contact improvisations and concerts played with the most unusual instruments, such as kitchen utensils or a hair drier. El Mercat de les Flors opened in 1983 and occupies a peculiar building; constructed for Barcelona’s International Exposition in 1929, for many decades it hosted a flower market (‘mercat de les flors,’ in Catalan).
Open In Google Maps
59 Carrer de Lleida, Barcelona, Catalunya, 8004, Spain
+34932562600
Visit Website
Visit Facebook page
Give us feedback

School, Theater
Facebook
Email
Twitter
Pinterest
Copy link
Share
Map View
El Institut Del Teatre is an education center for dramatic art, dance, and theater. In its building, besides the student faculties, you’ll find a theater museum (Museu de les Arts Esceniques) and a rich agenda of master classes dedicated to scenography. Student stage performances are held in the building or in another one of Barcelona’s venues. All performances are open to the public.
Open In Google Maps
Barcelona, Cataluña, 8004, Spain
+34932273900
Visit Website
Give us feedback

Theater
Facebook
Email
Twitter
Pinterest
Copy link
Share
Map View
Teatre Lliure On Montjuic (Free Theater of Montjuic) is one of the most prestigious theaters of Barcelona. It follows the principles of the ‘independent theater’ movement, which spread throughout Europe in the 20th century as an alternative to the elitism and political nomenclature of the traditional theaters. Teatre Lliure consists of two buildings. The first, historical stage has been situated in Gracia since 1976 (the second, in Montjuic, was opened in 2001). Its founder, Fabià Puigserver, underlined the importance of deep analysis of literature texts, openness to broader social classes, and the free exchange of creative opinions among the theater troupe.
Open In Google Maps
1 Plaça de Margarida Xirgu, Barcelona, Catalunya, 8004, Spain
+34932892770
Visit Website
Give us feedback 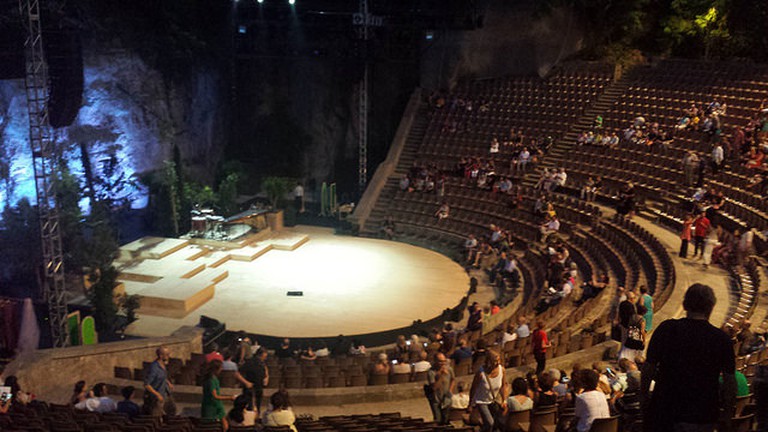 Teatre Grec | © Biheta /Flickr
Teatre Grec (Greek Theater) is an open-air theater which offers performances from June to August. Nowadays, the majority of the performances occur during the annual theater festival, called Grec. Founded in 1976, Festival Grec aims to promote new stage productions by local and international directors and is considered one of the most prestigious theater events in Catalonia. The shows are held in a Greek-style amphitheater, situated among marvelous gardens. The natural surroundings add a peculiar aesthetic charm to the venue, which was created especially for Barcelona’s International Exposition in 1929.
Open In Google Maps
s/n Passeig de Santa Madrona, Barcelona, Catalunya, 8038, Spain
+34934132400
Visit Website
Give us feedback
Give us feedback